Exclusive images in hand, F1i's Nicolas Carpentiers analyses the concepts and changes spotted during the first Grand Prix of the season: a comparison of front wings at Ferrari, the introduction of a new aerodynamic package at Force India, a revision of the oil extraction at Mercedes, a mini "T-wing" at Renault, etc... Clearly, the development race has already started!

Even though the SF71H won the first round of the season (admittedly with a bit of luck), its level of competitiveness is not yet optimal, to the extent that the team has not yet fully understood the way it really works.

Proof of this was delivered by Sebastian Vettel and Kimi Räikkönen trialing two versions of a front wing during Friday’s free practice sessions: the 2018 model, inspired by a McLaren concept and already used in Barcelona, and a spec almost identical to last year’s element.

As can be seen on the image below, the many differences relate to the openings cut in the main plane (compare to the yellow arrows), the outline of the main plane where it connects with the mandatory neutral section (blue arrows) and the curvature of the arches in the outer section (white arrows). 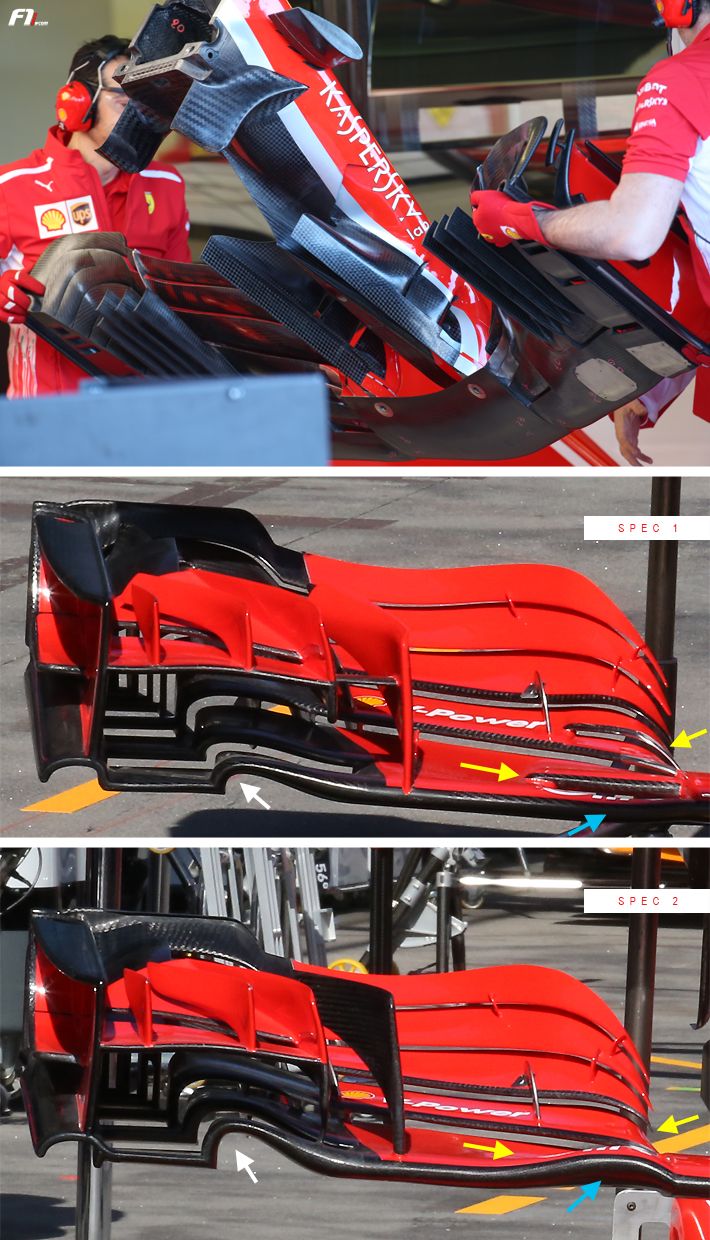 The objective of the comparison was to better understand certain characteristics of the car by equipping it with a wing known to work. For if the SF71H is visually close to its predecessor, it also deviates from it by its longer wheelbase and a front wing design developed from a different philosophy.

However, the wing is a crucial part, which defines the airflow over and under the entire car. The data collected during this exercise should allow the Maranello engineers to increase their understanding of the SF71H, thus giving Vettel more confidence in his mount:

"I just didn’t like the feel of it, said the Ferrari driver after the race. The car just doesn’t respond the way you like and it’s sliding in places you don’t want it to slide. I need a little bit more of confidence with the car, which is not where we want it to be yet. There is a lot of work to do. I still need to drive around the issues more than I want to. I know exactly what I want, and we need to work on it."

Mercedes against lowering the barrier of entry into F1

Hamilton backed off in Melbourne to protect engine