Almost a year after Jules Bianchi's tragic misfortune, Manor Marussia will no doubt feel overwhelmed with strong emotions when it arrives tomorrow at Suzuka.

The memory of the promising young French driver, who passed away on July 17 after a nine-month fight for survival, is still very much alive in the hearts of many of the members of the British team a well as its fans.

"A lot of the guys currently in our team were there last year, so we know it's going to be difficult, but equally we know Jules was a racer and would want to see the team focus on the job of racing."

"But I'd be lying if I said there won't be difficult moments because there definitely will be, no two ways about it."

Manor will undoubtedly wish to honour the memory of the sorely missed driver of its #17 car although it has yet to decide how.

"I thought Monaco this year would be poignant, but not too difficult," Lowdon admitted. "In the end I found it incredibly difficult, and that was a race where we had all the good memories."

"But equally what I learned from that is that you don't really know how you are going to feel until you are there, and it will be that way for this weekend."

Williams set to rebound in Suzuka

Four recent Virgin and Marussia cars up for sale

Rossi eager to pick up where he left off 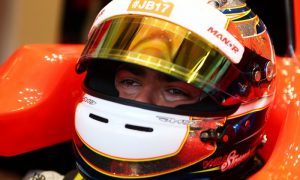