Toyota just can't catch a break at Le Mans, the Japanese manufacturer pretty much wiped out of the endurance classic even before the half-way mark was achieved.

After its dramatic last lap miss  in 2016, Toyota was back in force this year with another three car works effort.

But one does not choose to win Le Mans however. It is Le Mans which chooses its victor.

It all started early on with a front-end powertrain replacement on the #8 car after Sebastien Buemi reported a problem. The car lost 30 laps while it was repaired but eventually rejoined the race. 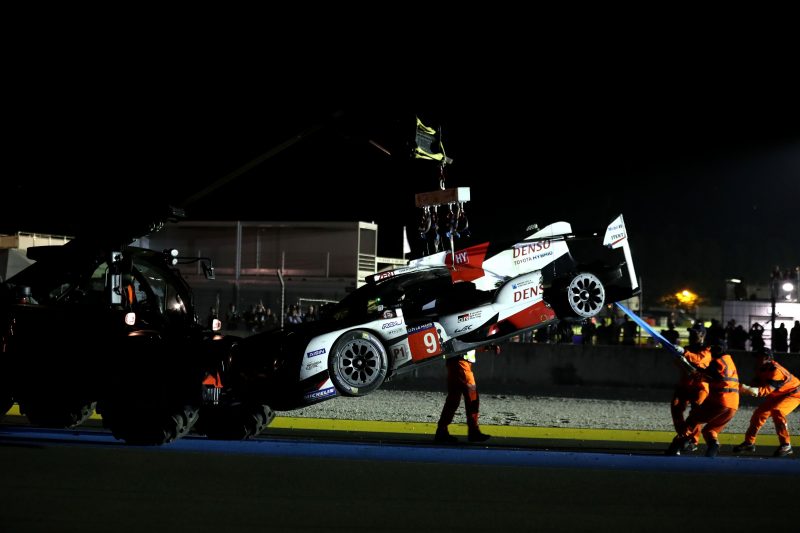 Disaster then hit the team's long-leading #7 car, when poleman Kamui Kobayashi started his stint after a 10th-hour safety car period and was halted by an apparent clutch problem.

Kobayashi attempted to crawl back to the pits but never reached his destination, and was left stranded for good while Porsche #1inherited the lead from Toyota #9.

But as soon as disappointment subsided in the Japanese camp, as its focused on its second-placed car, #9 driven by Nicolas Lapierre suffered a puncture and was sent across the gravel trap at the Dunlop Curve!

The Frenchman painstakingly tried to make his way back to base with a shredded left-rear puncture and diminished hydraulic pressure, the car even briefly catching fire before its permanent retirement.

In thirty minutes, Toyota had gone from dominant force to double-DNF, its chances of finally securing a Le Mans win blown into oblivion.

At the front at 9am this morning, the #1 Porsche remained untroubled with a 1lap advantage over the Jackie Chan DC Racing LMP2 and a Vaillante Rebellion.

Grosjean looking forward to Baku and another mid-field battle