Reigning world champion Nico Rosberg sees the man who replaced him at Mercedes as 'the perfect driver', praising Valtteri Bottas qualities and performance this year.

The Finn has settled in nicely at the German outfit, collecting his maiden F1 wins in Russia and Austria and positioning himself third in the fierce title battle behind Sebastian Vettel and Lewis Hamilton.

"He might be the perfect driver mentally because he is able to just concentrate on himself, making him consistent and fast."

Despite Ferrari currently having the upper hand on the Silver Arrows, Rosberg believes his former team is still incredibly strong after a period of inconsistent performance earlier in the season, part of which was perhaps rooted in Rosberg's departure.

"I wouldn't exactly say that," he told Auto Bild, "but of course my departure was difficult for them, especially with the new regulations.

"It's nothing against Ferrari, but they were able to start with their new car much earlier. So that was their advantage.

"But Mercedes is still very, very strong -- when you look at the car, the level of detail is just amazing."

Wolff: 'Wrong strategy for F1 to crawl back to V8 engines' 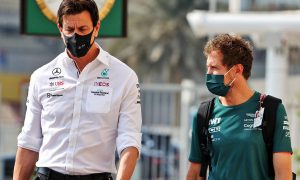