The tyre selections of each of the ten teams on the grid for the upcoming United States Grand Prix at the Circuit of the Americas on October 22 have been announced.

Each driver gets 13 sets of dry tyres to use during the race weekend. Everyone gets one set each of the three compounds offered by Pirelli for the event. After that it's up to each driver and their engineers to decide the distribution.

The three options available for Austin are soft, supersoft and ultrasoft. That's one step softer overall than Pirelli provided for last year's race.

The top three teams have all requested seven sets of the ultras for their drivers, a fairly conservative strategy. Mercedes' Valtteri Bottas, Ferrari's Sebastian Vettel and both Red Bull drivers supplement that with four sets of supersofts and two sets of the soft compound.

However, Lewis Hamilton has decided to take an extra set of soft tyres for the weekend. That makes it an even three-all draw between the yellow and red compounds for the championship leader.

The Mercedes driver won last year's race on a two-stop strategy. He started on softs, followed by a second stint on a new set of soft tyres and then finishing on mediums. Vettel was fourth on a three-stopper - supersofts followed by soft, medium and then a final set of supersofts.

Just one other driver - Sauber's Pascal Wehrlein - has made the same 2017 tyre selection as Hamilton. Kimi Raikkonen nudges in the other direction, preferring just one set of softs so that he can take an extra fifth set of supersofts. The only other driver requesting the same allocation as the Ferrari driver is Haas' Romain Grosjean.

Three teams have asked for allocations of two softs, three supersofts and eight sets of the ultras. That's the decision made by Force India, Toro Rosso and Renault for all of their drivers.

Two teams have decided to request nine sets of ultras for their drivers. Williams' Felipe Massa and McLaren's Fernando Alonso then add two sets each of soft and supersoft to the line-up.

Their respective team mates Lance Stroll and Stoffel Vandoorne opt for the minimum number of yellow tyres in order to have three sets of the red compound on hand in Austin. 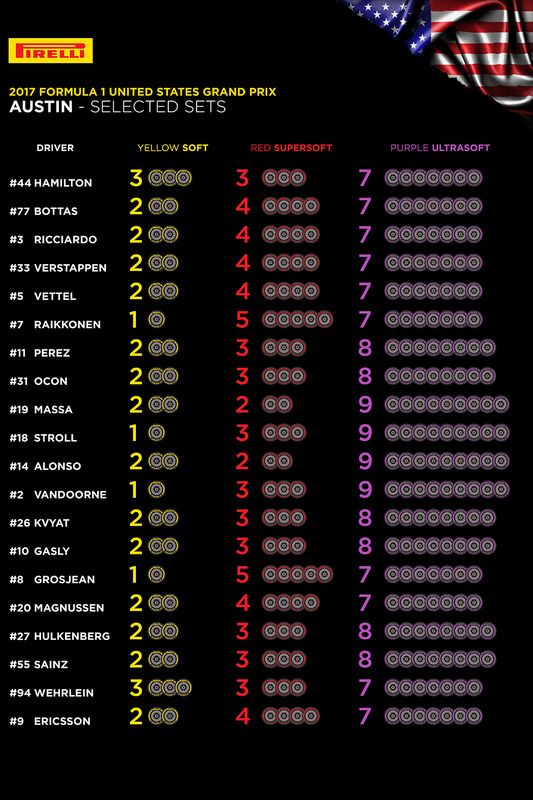 Drivers to get 'ready to rumble' intro at Austin