Fiat Chrysler boss Sergio Marchionne is thinking of getting the group's Alfa Romeo brand involved in the Verizon IndyCar series in the future.

Marchionne has revived Alfa's F1 aspirations with a commercial tie-up with Sauber and admitted that putting together a similar scheme with the family's Maserati brand and the Haas F1 Team was enticing.

At this week's Detroit Auto Show however, Marchionne suggested that Alfa Romeo could be considered for a foray into the IndyCar series, whose cars are supplied by Italian manufacturer Dallara while Honda and Chevrolet share its engine supply program.

"Why not Alfa Romeo in IndyCar?" he said. "We are thinking about it.

"Gian Paolo Dallara – I consider him a great, the best Italian engineer around."

The comments were music to the ears of Jay Frye, IndyCar's president of competition, although he offered no insight on any eventual talks with the Fiat Chrysler executive.

"It's encouraging to us to have an influential person mention IndyCar," Frye told RACER.

"We went on a roadshow to explain what we're doing – went to Europe – at the end of the season and met with a lot of manufacturers. Our five-year plan on engines and the next IndyCar chassis has been very well received."

"We've spoken with a lot of prospects, and there's been great interest, even with those who say the timing is off because they've just launched a program elsewhere.

"And there's been follow-up meetings when we've been asked to come back, which is a great sign, but is anything imminent? No," he added.

Like Formula 1, IndyCar is currently devising new engine rules for the future. Frye insisted however that incumbents Honda and Cherolet would more than welcome a third engine supplier.

'They've both been very helpful through this, and they know people in the industry, too," he told Motorpsort.com.

"We're as hand-in-hand with them regarding manufacturer prospecting as we have been in working on the five-year-plan and the new car."

F1 teams put 80kg of weight behind their drivers for 2019 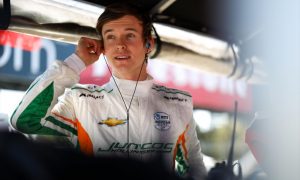