Formula E race stewards took aim at "modifications to the safety harness" which were conducted by the teams without the prior consent of the technical delegate.

Santiago was the first race in which the mandatory minimum car-swap time was dropped, and new harnesses, destined to help crews safely secure drivers' belts, were subsequently handed out to teams ahead of the race weekend.

Vergne's crew executed the fastest pitstop of the field in 46.687s, while Lotterer's swap was 48.372s and third quickest.

"We have two LMP1 drivers who are very experienced in the world of fast pitstops," he told Motorsport.com.

"Everyone has to agree what’s allowed and what’s not. It’s not a modification for safety it’s a matter to make sure you can do the belts up quickly – it’s for practicality, let’s say.

"It was a hard one for everybody in the discussions."

The disputed call has prompted the FIA's technical and safety departments to issue a clarification on what potential modifications are permissible before Formula E's next round scheduled in Mexico on March 3.

Sochi circuit gets a change of ownership 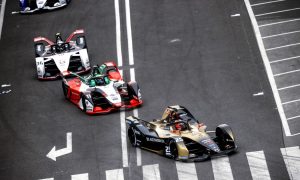