The Renault e.Dams driver had previously won Saturday's superpole to start the first of the weekend's doubleheader races from the front of the grid alongside Jaguar's Mitch Evans. He went on to finish the race in third.

In wet track conditions on Sunday, Buemi was once again the fastest man on the Brooklyn street circuit despite being pipped to the top of his initial qualifying group by Audi's Lucas di Grassi by 0.272s.

Four of the five cars to progress to the superpole round came from that same group - along with di Grassi and Buemi, Audi's Daniel Abt and Techeetah's newly crowned Formula E champion Jean-Éric Vergne also progressed.

Only Sam Bird missed out, and the Virgin driver will now start from eighth place in the race. His place in the final five was taken by Vergne's team mate Andre Lotterer who topped the fourth and final qualifying group as the track started to lose some of the standing water from earlier downpours.

The superpole round was delayed by the threat of thunder and lightning. When it finally went ahead, Vergne was out first and despite a brush with the wall he set a provisional pole time of 1:18.031s which was too quick for Abt to match.

Lotterer did manage to find an extra 0.018s to top the timings, but he was then ousted from pole by Buemi's 1:17.973s which was faster by four hundredths of a second.

That left only di Grassi. However his attempt to claim pole for Audi ended in a snap of oversteer that resulted in a heavy slap with the barriers which forced him to abort the run. As a result he will line up in fifth place on the grid, assuming there is no damage to his gearbox. 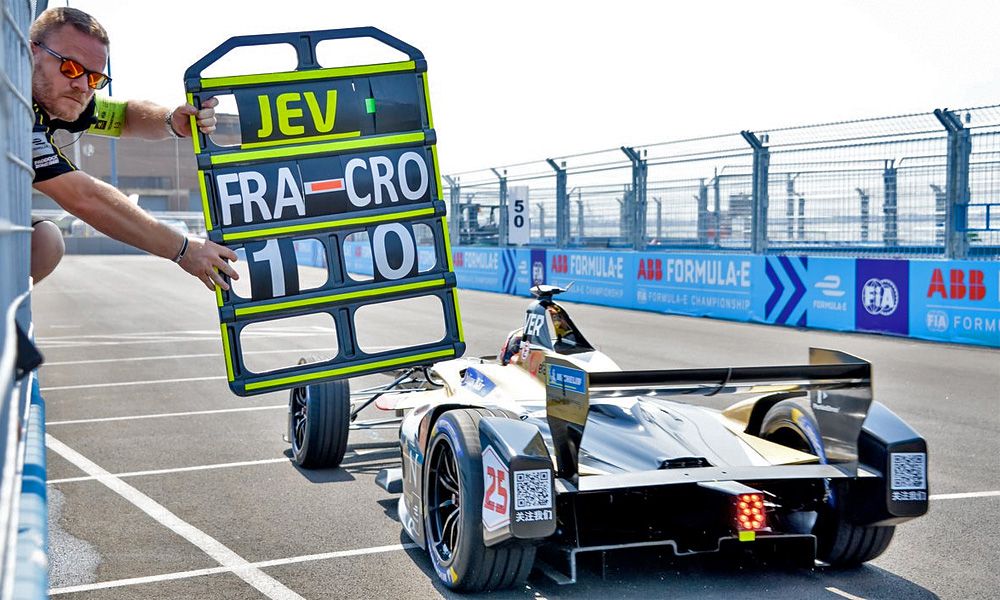 In the battle for the team championship it means that Techeetah claims first blood with both cars starting ahead of their Audi rivals. The Chinese team has a five point lead over the German squad in the standings.

Outside the superpole contenders, Mitch Evans will start from sixth ahead of his Jaguar team mate Nelson Piquet, despite them being the last drivers to complete flying laps in the final group. Both drivers will be hoping for better race fortunes than yesterday's double retirement.

Behind Bird, Mahindra's Felix Rosenqvist will line up in ninth alongside Andretti's Stéphane Sarrazin, followed by an all-Dragon sixth row consisting of José María López and Jérôme d'Ambrosio who will hope to avoid a repeat of yesterday's first lap coming together.

Sitting in for the injured Oliver Turvey at NIO, Ma Qing Hua clipped the wall at the start of his run and failed to set a representative time. Whether he will be able to take part in the race is now down to the race stewards.

Andretti’s Antonio Felix da Costa also failed to set a time, as a technical issue left the car with no drive.

'F1 doesn't define me as a person' says Vettel