Kevin Magnussen says he's finally having fun in Formula 1 thanks to Haas after a firs few trying and unstable years in the sport.

Magnussen joined the big time in 20174 with what he believed was a plum McLaren drive alongside Jenson Button. The Dane was dropped however by the Woking team after his maiden year as it made way for Honda and Fernando Alonso.

After a year away from F1, Magnussen was offered an opportunity to rejoin the grid with the works Renault outfit. It was another one-year spell however, but the 25-year-old committed to Haas in 2017 where he is currently the US outfit's top performer, scoring 45 of the team's 66 championship points.

Magnussen remembers his introduction to F1 and his first years as "pretty horrific and very unstable with different teams and losing my seat," he said.

"It was a very unstable beginning to my Formula 1 career. I had great momentum before I got to Formula 1 and I lost it once I arrived.

"The team that I got there with [McLaren] was very unstable and the management were fighting.

"The pressure was massive as we knew it was all between me and Jenson, we started making mistakes, and you start being tense and not performing well."

Fortunately, times have changed since and for the better thanks to his surrogate American family.

"It's really good fun, the most fun I've had in Formula 1, and the most competitive and kind of honoured feeling I've had," he said, speaking of Haas.

"I think it just shows the quality that the team is made of. They are able to make decisions and they are able to commit and take directions, it's a real strength of the team.

"They don't have any fights at the top or differences of opinions. With me, they agreed that I was the kind of driver they would like to commit to and they went ahead and did it."

No downside to Honda engine choice for Red Bull - Coulthard 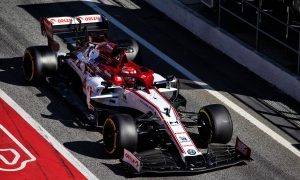