Max Verstappen believes that Singapore could be one of Red Bull's best opportunities of pulling off a strong result in the remaining seven races of 2018.

Last year Daniel Ricciardo split the two Mercedes drivers to finish in second place. Verstappen was less fortunate and got caught up in the first corner accident that wiped out both Ferraris.

Verstappen believes that the twisty Marina Bay Street Circuit should suit the current RB14 chassis, and that it will give both Red Bull drivers a chance to finish on the podium - or even win the race outright.

"I think the whole team is looking forward to Singapore because we know we have a real chance to have a good result there," he said this week.

"The race has been a strong one for us in the past and I think we should be able to challenge for a podium this year.

"I really enjoy driving there; the track has a lot of corners and is quite bumpy but it makes it all the more interesting to find a good set-up for the car."

The race is notoriously demanding on the drivers, who have to adapt to racing at night under floodlights, and in extremely humid conditions.

"The night race and hot temperatures really test you to the limit," Verstappen agreed. "For me Singapore is physically the hardest race of the season.

"I have been preparing for quite a while," he continued.

"A night race in general is a bit different with the lights, it adds an extra aspect that we don’t have at the majority of races.

"The atmosphere around the whole weekend creates a great buzz and is a perfect way to kick off the fly away races.”

Mick Schumacher makes it a hat-trick at the Nurburgring!

Grosjean 'enjoying his time at Haas and hoping for more' 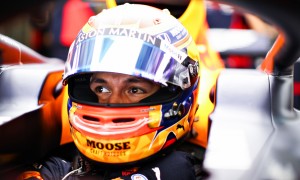