F1 race director Charlie Whiting felt compelled to apologise to Lewis Hamilton after the Singapore Grand Prix for what he considered to be poor behavior from one of the field's backmarkers.

Hamilton capped off his incredible Saturday qualifying performance with a dominant win Sunday evening, but there was a moment in the race where it could have gone wrong for the Mercedes driver.

The Brit saw a five-second lead over Red Bull's Max Verstappen suddenly shrink to almost nothing when the front-runners came upon the dueling pair of Sergey Sirotkin and Romain Grosjean.

It was the latter who was the object of Whiting's discontent - and of a five-second penalty inflicted by the stewards - for his uncanny ability to ignore a set of blue flags displayed in several corners.

"I think Romain forgot the golden rule of blue flags and that's if, you are in a battle, you've got to forget about your own battle and move over," said Whiting in a post-race briefing.

"I've drilled that into them many, many times and he completely forgot about it. The light panels were flashing with his race number on and Lewis was much, much faster.

"It was one of the worst cases of ignoring blue flags that I've seen for a long time."

In addition to his five-second time penalty, the French driver also saw three penalty points added to his licence, bringing his tally to nine points collected in the past 12 months, moving him dangerously close to the 12-point threshold that will immediately a race ban. 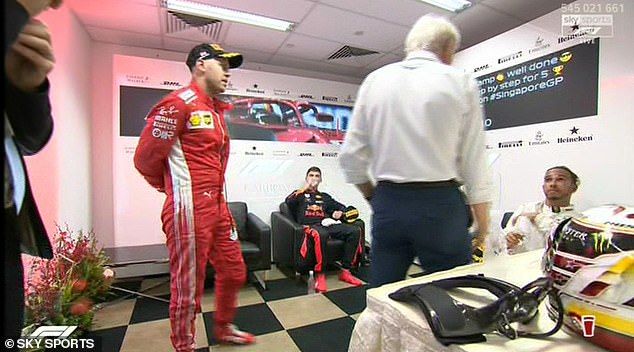 Hamilton said it had all been a bit of a hair-raising moment, the night's winner even admitting that the blue flag display wasn't an easy one to catch.

"It definitely got a little bit interesting towards the end with some of the backmarkers as you already felt the draft from the cars when you were five or six seconds behind, the car would start to slide a little bit more," said the four-time world champion.

"Max had an opportunity really. I had to go on a massive defence and even then I was still racing the backmarkers, they still weren't lifting off as I was alongside them.

"The hairs were standing up for a second, but then back to business."