An issue with his car put Max Verstappen on the back foot the minute that the lights went out at the start of the Abu Dhabi Grand Prix.

The Red Bull dropped from sixth on the grid all the way to tenth by the time the drivers made it into the first turn. It certainly wasn't the start that the Dutch driver was hoping for.

Verstappen said that the problem had not been down to him, but a technical glitch on the car.

"It was not an easy race," he said. "I had a problem at the start. The launch was good, but my engine went into a safety program.

"In second gear my engine went into protection mode for overheating which is a bit odd," he added. "Normally in Singapore or whatever it's a bit more critical. It was just unlucky.

"I had it again during the restart afterwards," he added. "Then they found out there was a problem and I had to cancel a sensor, and then it was fine.

"It was not easy, but we managed to come back to a good position and put some pressure on the guys ahead," he said. "We got through it without damage, so I'm happy."

Verstappen had been the highest-placed car on the grid starting on the shorter-lived hypersoft tyres before pitting on lap 18 to switch to the more durable supersofts.

"I think that we stopped quite early, but we had to be because I had started on the hypersoft tyres," he confirmed. "We managed to keep the supersoft alive and I had a good pace.

"In the end of course I am very happy with third place," he added.

One of the problems that prevented him from making up positions in the closing laps was Pierre Gasly's Toro Rosso springing a leak and spraying oil over Verstappen as he came up to lap the backmarker.

"The last few laps were not that easy, because there was a Toro Rosso leaking oil onto my helmet, so I could not really see where I was going!

"I don't know exactly what happened there," he continued. "I'd already gone through all my tear-offs and then there was so much oil on my visor it was like driving through fog."

"I was [wiping it with my glove] but it made it even worse so I just stayed off it. I was asking the team 'Where's Daniel?' because I couldn't see him in the mirrors or anything."

Verstappen missed out on beating Kimi Raikkonen to third place in this year's drivers championship by just two points, but the 21-year-old brushed that aside. More important to him is the prospect of challenging for the title in 2019 when Red Bull switches to Honda engines.

"It looks very promising, but I want to be realistic so we'll just have to wait and see," he told Sky Sports F1 after the race.

"We still have to build a great car. And then the engine has to be reliable as well, and powerful - I think it will be there, but we first have to do the winter testing and then we'll see." 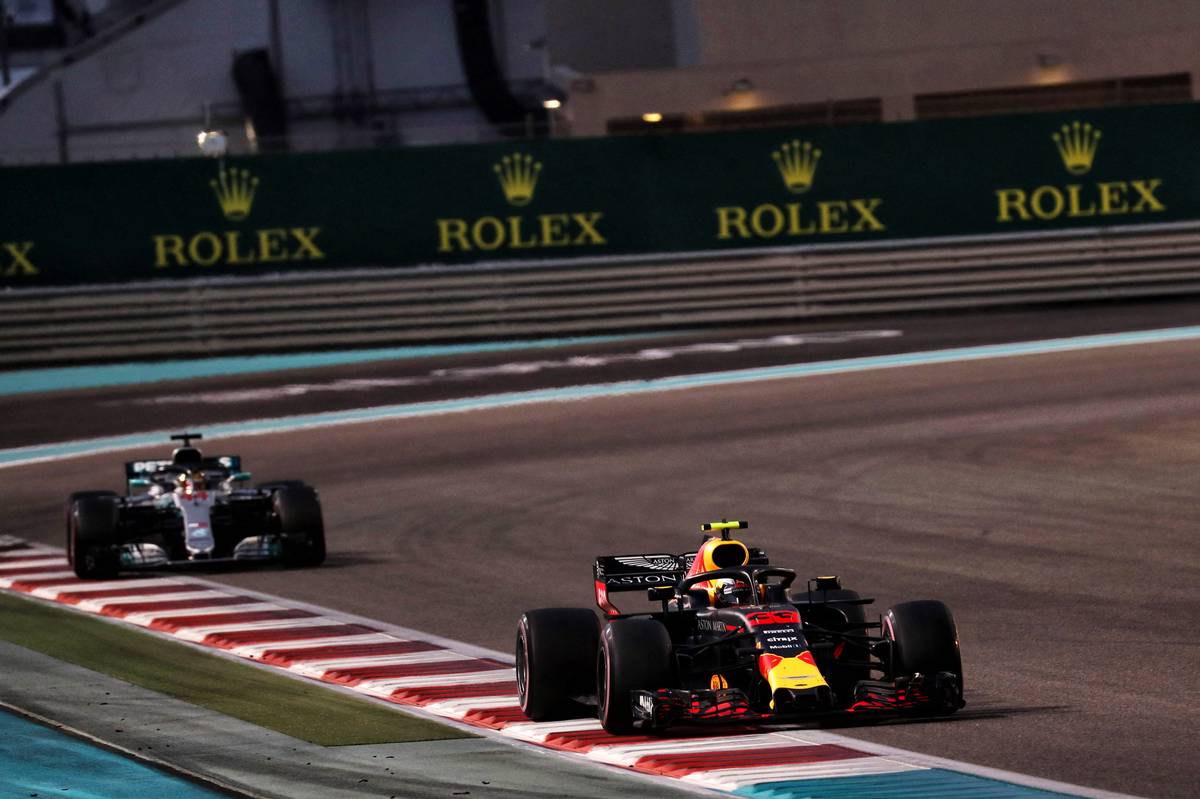 Despite Sunday's incident with Gasly's Honda-powered car spraying him with oil,
Verstappen said he wasn't worried by the number of new engines that Toro Rosso had gone through in 2018 as a 'test bed' for Honda ahead of Red Bull's switch.

"But of course I prefer sometimes maybe to win up a race and then blow up one rather than be consistently slow!

"We want to push our development, and we have a lot of good guys back at the factory and they've already been working very hard on it. But I'm pretty sure Mercedes and Ferrari have been doing the same, so I don't know."

Verstappen confirmed that Red Bull's technical director Adrian Newey was "very involved" in the development of the RB15.

As for himself, he was putting aside his spat with Esteban Ocon in Brazil as as a learning experience which will make him a better driver next season.

"You learn from your mistakes. But as a driver I didn't really change massive things. Just some situations you judge a bit better or you think about later in the race.

"As a driver your instinct is always there. But of course you learn from it and you can always fine tune little things."

Verstappen says that still doesn't know what his two days of 'community service' for pushing Ocon in parc ferme in Interlagos will look like.

Vettel plans to give Hamilton a 'harder run' in 2019