Victory in the final Formula 1 race of 2018 went to Lewis Hamilton, as the Mercedes driver won the Abu Dhabi Grand Prix by pulling off a super-long run to the finish following a very early pit stop.

There was a scary incident for Renault's Nico Hulkenberg when his car was flipped over on the opening lap. A safety car was deployed while a small fire was extinguished, the car righted, and Hulkenberg helped out of the cockpit to the relieved cheers of anxious fans in the grandstands. 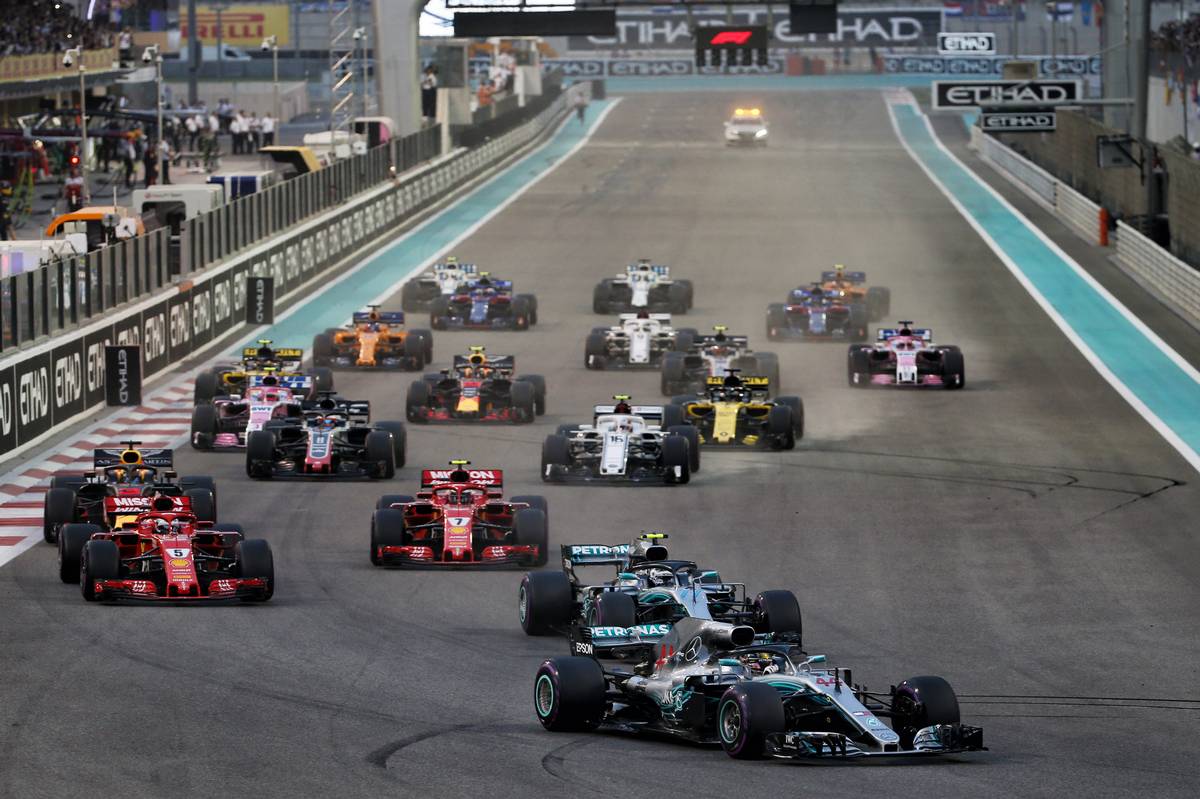 As the sun set on both the 2018 season and over the Yas Marina Circuit itself, Mercedes team mates Lewis Hamilton and Valtteri Bottas led the 20-car field to the starting grid one last time before the winter break.

The Silver Arrows got off to a good start, followed into turn one by the Ferraris of Sebastian Vettel and Kimi Raikkonen. Daniel Ricciardo tried but failed to repel Sauber's Charles Leclerc in a contest for fifth; his Red Bull team mate got the worst launch of anyone, with Max Verstappen losing multiple positions through the opening corners.

Meanwhile Romain Grosjean and Nico Hulkenberg were side-by-side going into the turn 9 chicane as they scrapped over seventh, and two into one simply wasn't working. The two made light contact but the effect was dramatic, flipping the Renault up into the air and rolling it over into the outside barrier. Although Hulkenberg was unhurt he was left hanging upside down unable to extricate himself as flames spat out of the back of the upturned car.

A safety car was deployed as marshalls got to work with extinguishers and the doctor checked that the only thing Hulkenberg had hurt was his pride. The car was righted and the driver was able to climb out, shaken but with no obvious injuries. He was taken to the medical centre for further observation while the stewards reviewed the incident and decided that no sanction was required for Grosjean who had been able to continue in the race. 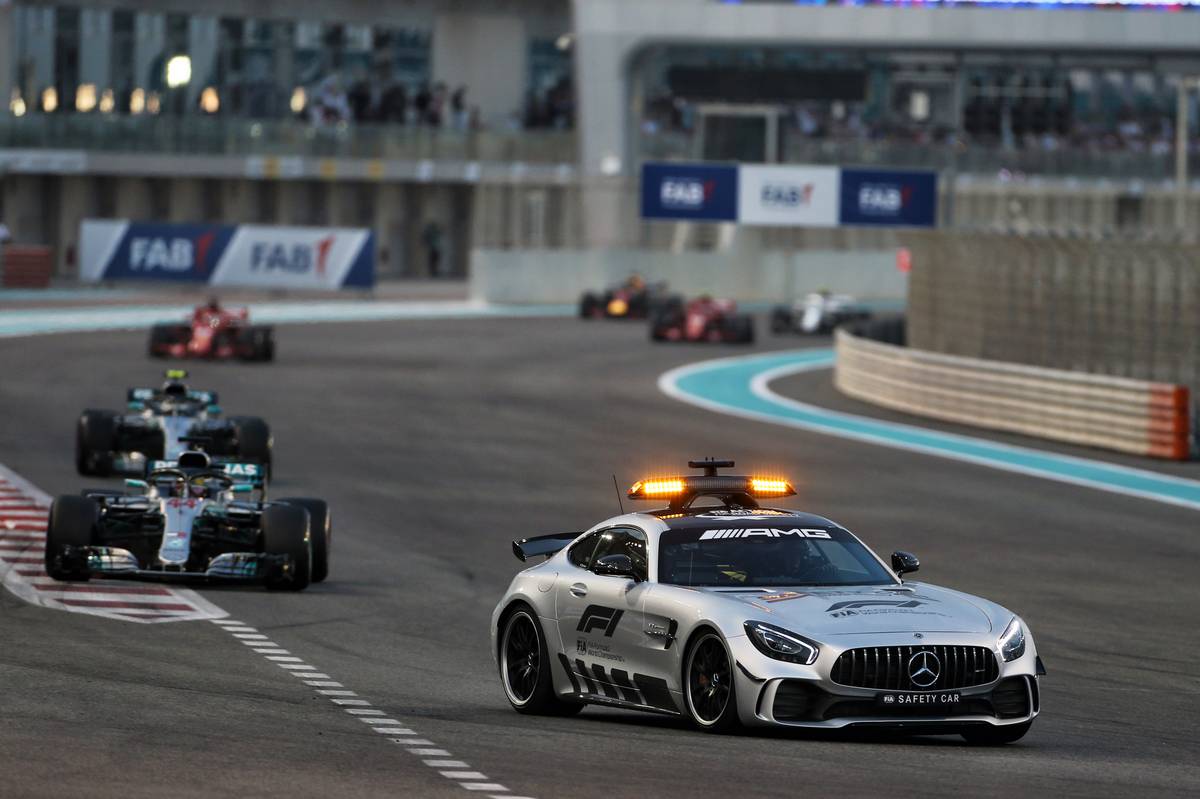 The safety car came in on lap 5 and racing resumed, Hamilton calmly getting underway ahead of Bottas, Vettel, Raikkonen, Leclerc, Ricciardo and Grosjean. Having fallen to ninth place, Verstappen was on the move and applying pressure to - who else? - his Brazil nemesis Esteban Ocon. He tried to get around the Force India at the hairpin only to have Ocon fight back and reclaim the position; he tried again at the second chicane and this time made it stick with just a little contact between the cars in the process.

Moments later the race was back under a Virtual Safety Car, after Raikkonen's engine suddenly lost power forcing the Ferrari to pull over on the pit straight. It was a most unfortunate and unwelcome end to the Finn's tenure at Maranello. Hamilton took the opportunity to pit for a switch to supersofts which dropped him to fifth just behind Verstappen, and promoted Bottas to the race lead; Leclerc also pitted and rejoined in 14th place.

Hamilton immediately tried to pass Verstappen at the chicane, but the Dutch driver was able to respond and retake the position using DRS down the straight, after which the Red Bull started to pull away as Hamilton had to be mindful of making his tyres last to the finish. His objective now was ensuring that Bottas and the rest of the cars ahead of his didn't get too far down the road before they made their own pit stops.

Behind Hamilton, Ocon and his team mate Sergio Perez were running ahead of Carlos Sainz in the sole remaining Renault who had just put Sauber's Marcus Ericsson to the sword for ninth into turn 11. Ericsson would subsequently retire on lap 26 after losing power. In the meantime, Pierre Gasly was clinging on to the final points position, with Fernando Alonso up to 11th in his final Formula 1 race for McLaren.

Vettel pitted from second on lap 16, but a problem with the right-rear tyre change meant he exited behind Ocon, blunting his hopes of undercutting Bottas who responded next time by for his own service. Both drivers made the expected move to supersofts, Bottas coming back out in fourth behind Hamilton as Vettel quickly passed the Force India to move back up to fifth.

Having started the race on hypersoft tyres, Verstappen had done well to make it to lap 18 before pitting from second. Among the leaders that left only Ricciardo yet to come in for fresh rubber: the Aussie was in no hurry to surrender control of the race, as he comfortably maintained a six second lead over Hamilton with Bottas a further eight seconds in arrears. 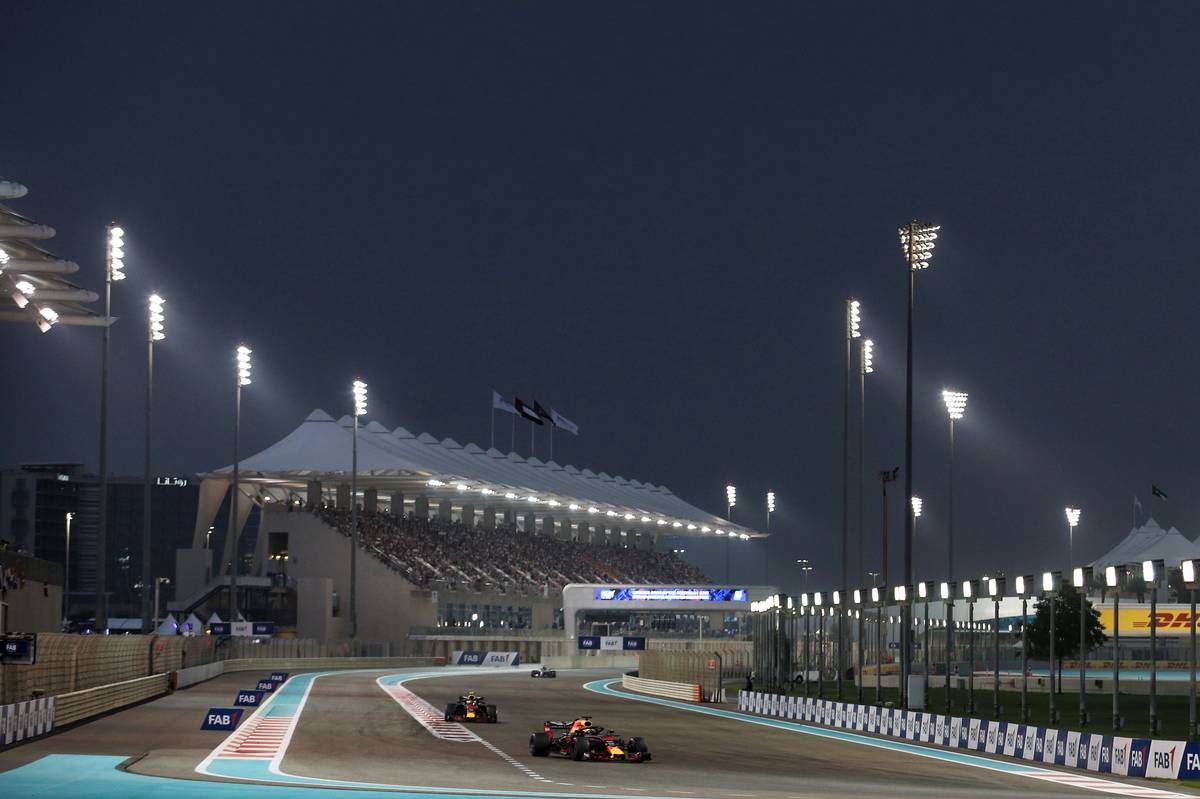 The unexpected sight of light rain passing over the circuit in the desert nighttime caused brief consternation among the teams on pit wall. Fortunately it didn't seem to affect the track conditions, with the situation at the front of the race remaining static. However there was a terrific scrap further back for 11th place, where McLaren's Stoffel Vandoorne was holding up Grosjean: the Haas found a way past on lap 31 only to then be swallowed up again by the others in a wild three-wide charge down the straight which allowed Ocon to come out on top. Unfortunately the Frenchman was subsequently handed a five-second time penalty for gaining an advantage by exceeding track limits.

Ricciardo finally pitted on lap 34, bolting on fresh supersofts for the final 21 laps but now back down in fifth behind his team mate. It meant that Hamilton and Bottas were restored to the front, but a lock-up in turn 5 then saw the Finn run wide which was all the invitation that Vettel needed to pounce and pick up second place. Another lock-up moments later saw Bottas coming under serious pressure from Verstappen, the Red Bull finally bullying its way past the struggling Mercedes at turn 11 on lap 39. Moments later Ricciardo also completed a robust pass on Bottas, which appeared to confirm that the Finn had a worsening issue on his car.

In an attempt to correct the problem, Bottas made a precautionary 'free' pit stop from fourth place on lap 41 for fresh tyres after the telemetry highlighted a potential issue on the right rear from his encounter with Verstappen. It provided slight relief but Bottas couldn't improve his position in the laps remaining.

Nor was Hamilton looking entirely secure in the lead, the Briton complaining about his own tyres. As early as lap 28 he had told the Mercedes pit wall "My tyres definitely don't feel great...", and he was made to work hard for the rest of the evening to nurse them all the way to the finish. This he ultimately managed to do with the aid of a 5.5s lap over Vettel, Verstappen and Ricciardo. 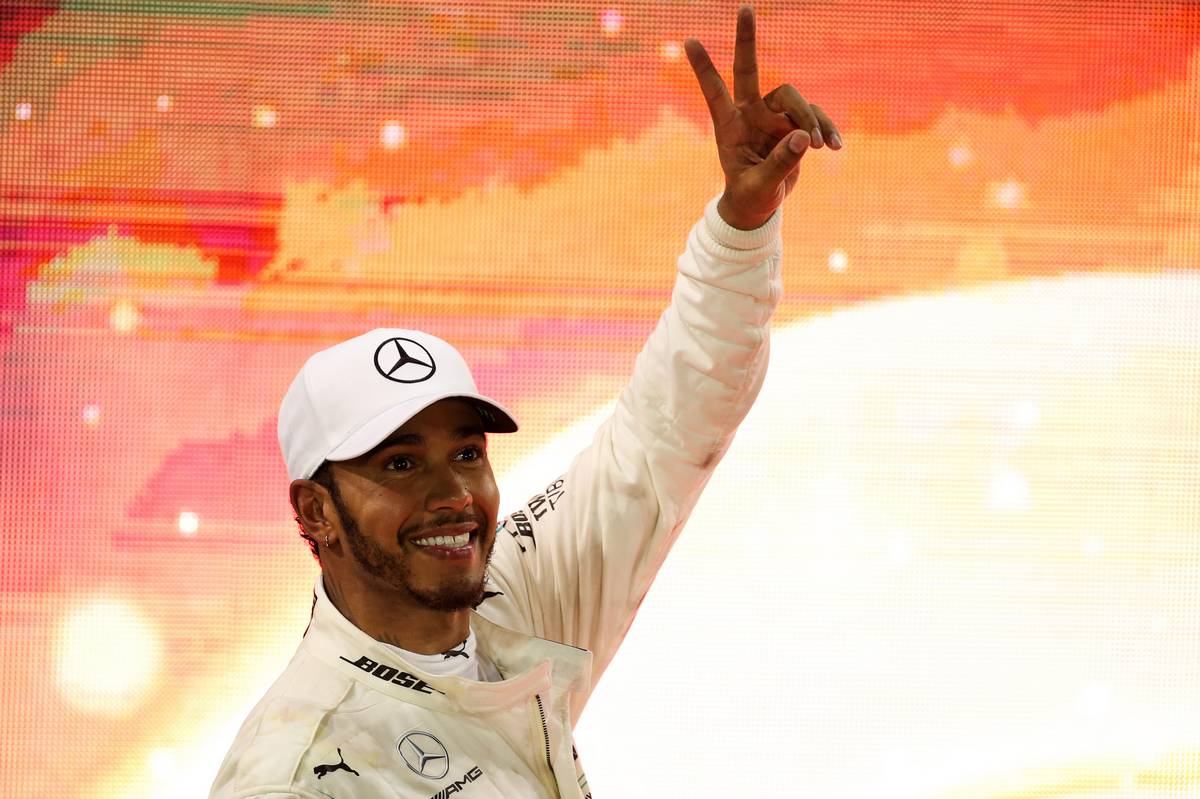 Carlos Sainz had also run long and was rewarded by sixth place ahead of Leclerc and Perez. After a strong start to the race, Ocon lost ground with a sluggish pit stop and was subsequently forced to retire on lap 47 after an oil leak from the back of the Force India quickly culminated in a total loss of power which promoted Grosjean to ninth place.

Moments later, Gasly suffered a similar fate as Ocon when oil and smoke started to belch out of the back of the Toro Rosso. It cost him a likely points-paying position as he was forced to park behind the barriers on lap 48, meaning that Kevin Magnussen joined his team mate in the top ten for the second double points finish in a row for Haas.

Fernando Alonso concluded his F1 career - for now at least - just outside the points in 11th after being handed a late five second penalty from the stewards for leaving the track and gaining an advantage. Alonso subsequently joined Hamilton and Vettel performing smoky doughnuts on the main straight to the delight of the fans in the grandstands.

Alonso was followed to the line by Brendon Hartley, who had suffered damage to his front wing on the opening lap of the race and followed it up by broadsiding the barrier on lap 4. He had been lucky to make it to the finish at all, but it won't have been much help to his waning bid to retain the race seat next season.

Williams' Lance Stroll was 13th just ahead of Vandoorne, with Sergey Sirotkin the last of the 15 drivers still running by the time the chequered flag came out to bring the 2018 season to a close. 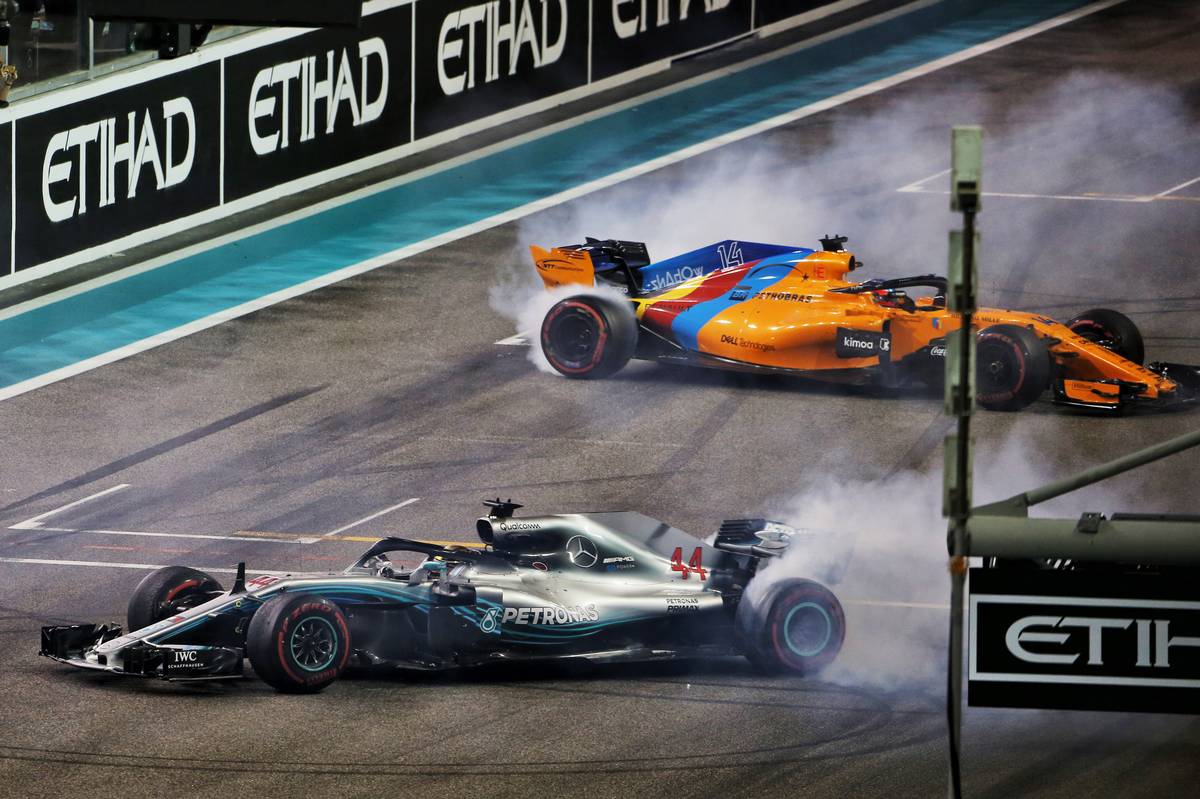 Jenson Button signs up for a season of F1… with Sky