Fernando Alonso said that he was very impressed by how seven-time NASCAR champion Jimmie Johnson did in the McLaren F1 car at Bahrain International Circuit on Monday.

The pair swapped cars for the day, with Johnson getting behind the wheel of a classic 2013 McLaren MP4-28, powered by a formidable Mercedes V8 engine.

"It was mind blowing," said Johnson, who had never driven a single-seater on a road course before. "The sensation of speed ... Literally, on the first outing my helmet was trying to leave my head!

"I got my helmet more under control and then it was really my eyes trying to find their way far enough ahead and far enough round the turns," he continued.

"At the end I really quit focusing on the braking markers themselves and was able to look at the apex, and had an idea of when to hit the brakes and was putting together some good laps. It was fun."

Alonso agreed that the American showed promise. "Impressive," he said. "I think he was really gaining time every run he was going out.

"He took it very seriously," Alonso continued. "He was able to guess this extra grip that the new tyres are giving to you, and extract that grip into laptime so I was very impressed with that."

Alonso in turn got a chance to try out a NASCAR Cup Chevrolet, but found it surprisingly primitive compared to the state of the art technology in Formula 1.

"I knew that the cars were very basic in terms of technology," he said. "Last time I ran H-gearbox was in 1999, so it was going back a lot in time.

"The car was very powerful for the amount of grip available," he added. "You have fun driving on the race track. Maybe with other cars around it is different but definitely alone it was a lot of fun."

After a full day of running, Johnson's best lap was 1:40.462s, just two tenths shy of the benchmark time set by Alonso at the start.

"I didn't know how close I would get," he said. "The racer in me was of course focused on that. I was straight away asking, 'What was his laptime? Can I look at the data and try and piece that together?'"

Johnson admitted that he'd probably got more out of the swap than Alonso. "I honestly think at the end of the day I got a way better swap experience than he did."

Although he enjoyed the day, Alonso ruled out looking at a full-time switch to NASCAR now that he was done with F1.

"I'm not thinking about it," he said. "It would need a lot of commitment, because I'm not so skilled in those aspects right now and the schedule is very intense. 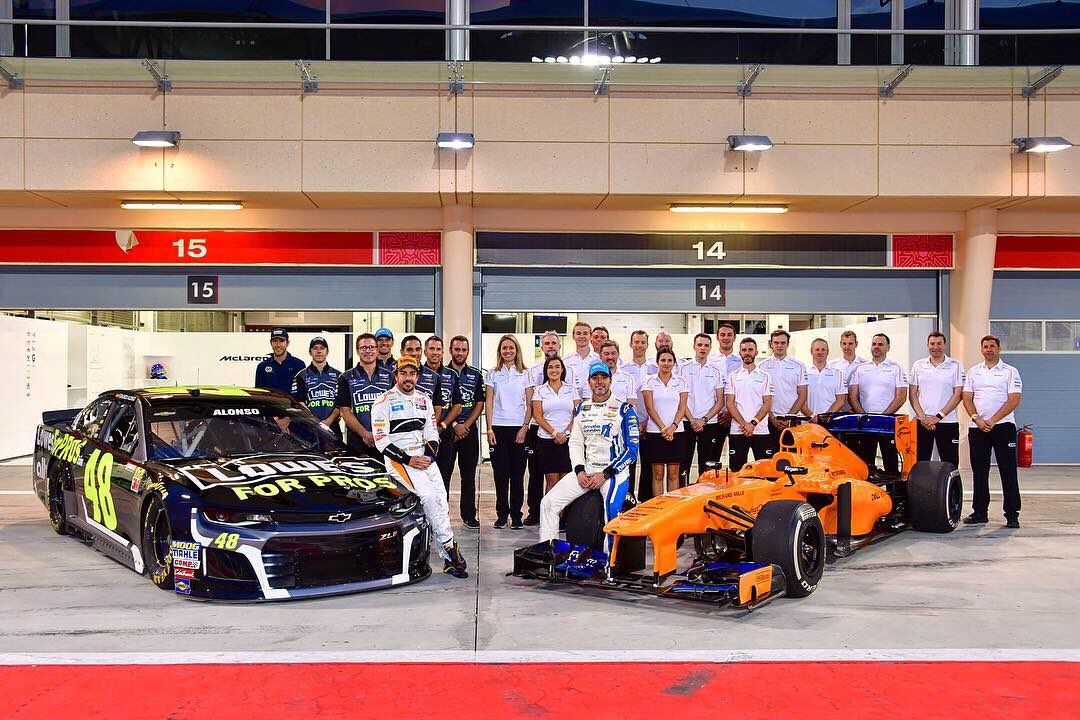 "It was a lot of fun, but I think most of the performance from these cars comes from experience. Maybe a single date someday is possible, but not the whole championship."

Alonso will instead focus on the FIA World Endurance Championship including next year's 24 Hours at Le Mans.

Hew ill also take part in his second Indianapolis 500 race in May as he seeks the concluding element of the unofficial Tripe Crown of Motorsports. Only Graham Hill has ever won the Indy 500, Monaco Grand Prix and Le Mans during his career. Alonso aims to be the second.

And Johnson is also thinking of a possible future IndyCar outing.

“2020 is my last year under contract with Hendrick, and I’ve been approached many times about the Indy 500," he revealed. "[However] I’m not overly excited about those fast ovals.

"But I think with my status and relationships I could put together some road course races in IndyCar," he added. “I’m far from done, I want to keep driving and hopefully I can find some good opportunities.”

Scenes from the paddock - Abu Dhabi