D'Ambrosio had qualified for the race in tenth place but made quick progress to run in the top three by the time that the two leading BMW Andretti cars had a disastrous coming together in the final laps.

Starting from pole position, Bird survived a first corner clash with Vergne. Launching from the front row, the DS Techeetah had tried to take the lead from Bird by diving down the inside only to end up making contact and spinning into the middle of the track.

The temporary blockage forced the rest of the field to scatter to avoid running into him, with Nissan e.Dams' Sébastien Buemi dropping from third on the grid to 13th as a result. Meanwhile, the fracas allowed BMW Andretti's Alexander Sims to pick up second place.

That put Sims just ahead of his team mate da Costa, who started the race from sixth after being handed a three-place grid penalty for using too much power on his non-flying lap in qualifying. Da Costa had come into this weekend's race with the points lead after his victory in the season opener in Ad Diriyah.

Frijns was up to fourth place from eighth on the grid in the second Virgin. He was followed by d'Ambrosio, while Lucas di Grassi had picked up five places in the Audi Sport ABT after a difficult day in practice in qualifying left him starting from 11th.

On his way up, di Grassi had ran into Pascal Wehrlein which left the second Mahindra limping back to pit lane for an early retirement. Also out of the race in the opening laps was Gary Paffett, the HWA spinning out with a left-rear puncture after first-lap contact with team mate Stoffel Vandoorne.

At the front, da Costa was quickly past his team mate and immediately challenging Bird for the lead. He finally pulled it off on lap 10, forcing Bird to cut the chicane on the way which then allowed Sims the chance to pounce for second place at the next turn. 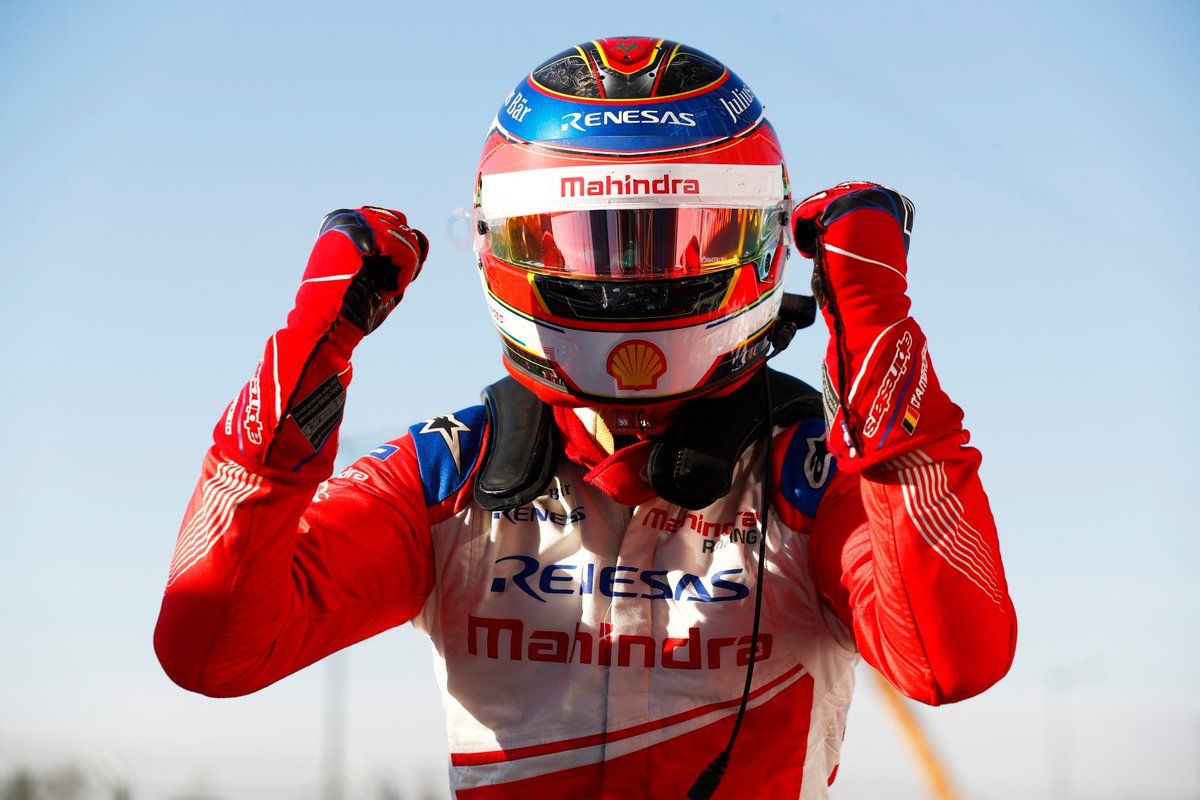 The BMWs were soon able to pull away as d'Ambrosio moved his way in front of the two Virgin cars. Also on the move was Vergne: having fallen to the back of the field at the start, he then battled his way back to eighth place by lap 18 with a little under 20 minutes remaining of the 45 minute race.

With battles raging through the running order, the widespread use of attack mode meant that the field had been eating away at the BMW pair's four-second lead at the front. Sims in particular appeared to be frustrated by da Costa's pace, and he went for the lead himself on lap 25. However the pair both locked up and banged wheels, breaking the cardinal rule of motor racing about not hitting your team mate.

Da Costa failed to make the next turn and nosed into the barrier, triggering the only safety car of the race. Sims had just managed to keep it on the track, albeit losing positions to d'Ambrosio, Frijns and Bird in the process.

There was just time for one final lap by the time the safety car was withdrawn. Of the leaders, Sims and di Grassi were the only drivers still able to use attack mode but neither found the room to improve their positions by the chequered flag.

D'Ambrosio narrowly held on at the front, beating Frijns to the line by 0.143s with Bird taking the final podium spot. Sims had to settle for fourth having held off Vergne and Techeetah team mate Andre Lotterer, with di Grassi ending up in seventh ahead of Buemi.

The top ten was rounded out by Jaguar's Mitch Evans and Audi's Daniel Abt. Just missing out were the two Dragon cars of José María López and Maximilian Günther, followed by Edoardo Mortara (Venturi), Nelson Piquet (Jaguar), Oliver Rowland (Nissan) and NIO team mates Oliver Turvey and Tom Dillmann. Final man across the line was Felipe Massa in the second Venturi. 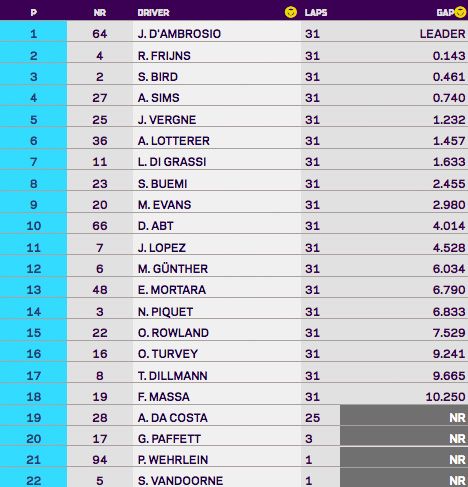 The third round of the championship will be held on January 26 at Santiago de Chile.

With Russell, Mercedes may have another star on its hands

Brundle sees McLaren and Williams 'left in a void'