Many drivers lament the presence of the chicane that splits Paul Ricard's long Mistral straight, but the venue still delivers big numbers when it comes to top speed.

Maximum velocity is obviously dependent on aerodynamic load as well as outright power, but it was perhaps still surprising to see Daniel Ricciardo Renault clock in with the best top speed.

The Aussie's 342.5 km/h recorded by the speed trap nicely supports the French manufacturer's claimed improvements of its most recent specification power unit.

It was but a small edge however for the Renault-powered car as three Ferrari-equipped drivers - Kimi Raikkonen, Antonio Giovinazzi and Sebastian Vettel - were hot on Ricciardo's heels.

French Grand Prix poleman Lewis Hamilton rode the Mistral straight at 338.6 km/h but we know the Mercedes W10 is in a league of its own in Paul Ricard's third six-corner winding sector. 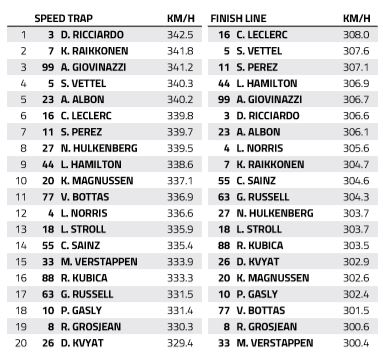 McLaren: No plans to use Alonso in future F1 tests