In its latest update, Juan Manuel Correa's family has revealed that the F2 racer is now "fully conscious" and ready to undergo a crucial operation on Sunday to his lower right leg.

The American-Ecuadorian driver who was involved in the horrendous crash that claimed the life of Anthoine Hubert in the Formula 2 feature race at Spa, was transferred to a London hospital and put in an induced coma for several weeks.

Correa's pulmonary complications meant that doctors could not operate on his lower legs, but a favourable evolution of his lungs now allows the 20-year-old to undergo a complicate surgery procedure that will hopefully save his right leg.

"Earlier this week, Juan Manuel was transferred to a new hospital in London, England that specialises in orthopedic surgeries as the focus shifts from his lungs to his lower body extremities," stated Correa's family in its latest update.

"Juan Manuel is now fully conscious, and his lungs have recovered much faster than anticipated. His overall physical improvement and willpower has doctors impressed.

"The main objective this week has been to get Juan Manuel in the best condition possible for his surgery on Sunday that will be 10+ hours in duration.

"Sunday’ surgery will be crucial in determining Juan Manuel’s future. Doctors will have, for the first time since the accident, complete access to the wounds on his lower right leg. They will be able to determine the actual level of damage to his tibia, ankle, and foot.

"During surgery, they will save what can be saved and removed what needs to be removed in order to rebuild his right lower leg to the best possible condition. The surgeons are the top in their field and are cautiously optimistic given the fast-paced recovery that Juan Manuel has had in the previous week.

"The injuries that Juan Manuel sustained are severe, and the surgery procedure is very complex.

"Doctors gave Juan Manuel the option of right foot reconstructive amputation. He has chosen NOT to have the amputation and to proceed with the surgery, understanding all the challenges involved."

We'll be keeping our fingers crossed for Juan Manual on Sunday as the Sauber junior driver and his doctors tackle one more big challenge.

Ferrari in search of 'good compromise' to uphold momentum

Vettel signs up for final Pirelli tyre test before Japan 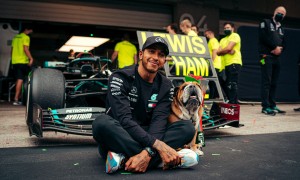