Bottas swept into the lead heading into turn 1, leaving the Ferrari to fight it out with Lewis Hamilton to hold on to second place. The matter was eventually decided in Vettel's favour, but the overall result was still enough for Mercedes to clinch the constructors title for a sixth consecutive time.

Alexander Albon just missed out on a podium in fourth place ahead of Carlos Sainz, his Red Bull team mate Max Verstappen having been forced to retire after clashing with Charles Leclerc on the first lap. 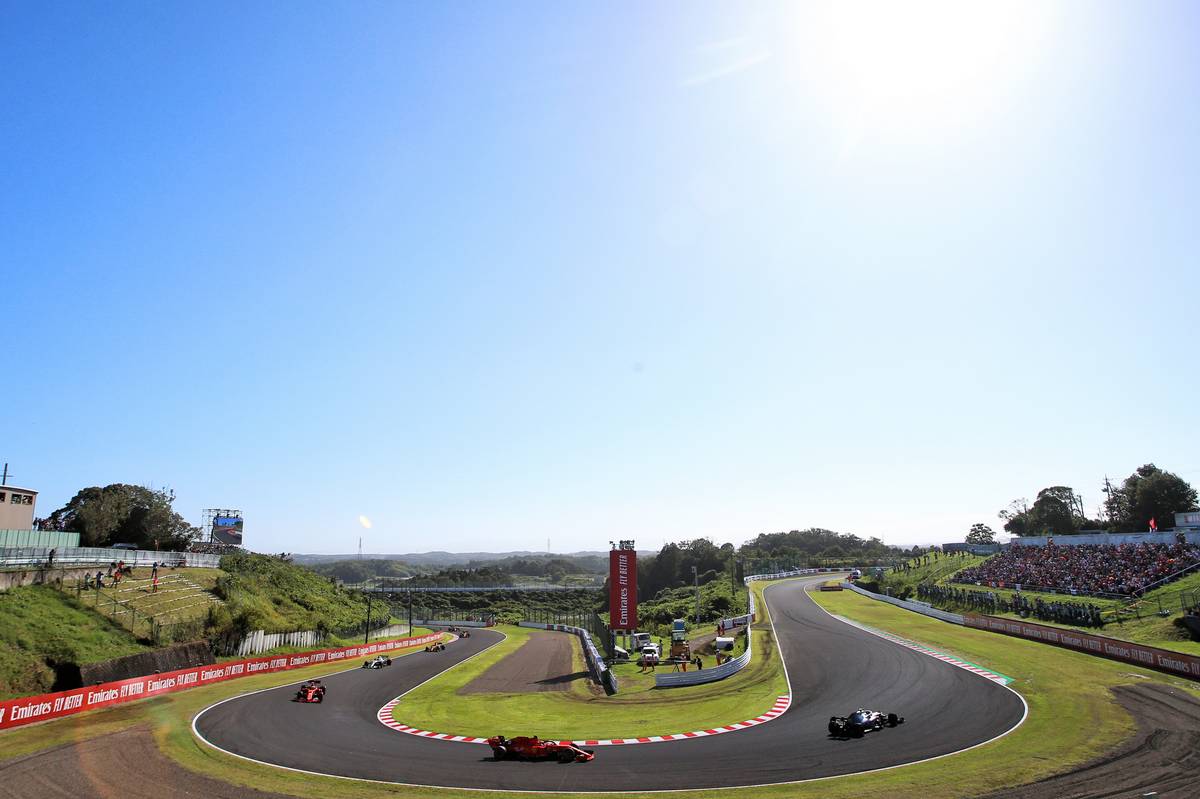 It felt like no time at all since qualifying when the cars reconvened on the grid for the start of the Japanese Grand Prix, with the skies over Suzuka a bright blue betraying no trace of typhoon Hagibis that had resulted in such disruption to the weekend's schedule. However, the gusty winds that had caused so much trouble in the morning session continued to make themselves felt.

With Ferrari's Sebastian Vettel and Charles Leclerc having secured an unexpected front row lockout ahead of Mercedes pair Valtteri Bottas and Lewis Hamilton, the two-by-two line-up continued with Red Bull's Max Verstappen and Alexander Albon lining up on row three after posting identical times in qualifying. They were followed by an all-McLaren behind them, with Carlos Sainz and Lando Norris ready to take advantage of any opportunities that presented themselves in the downhill run down to turn 1. The top ten was rounded out by Toro Rosso's Pierre Gasly and Haas' Romain Grosjean. 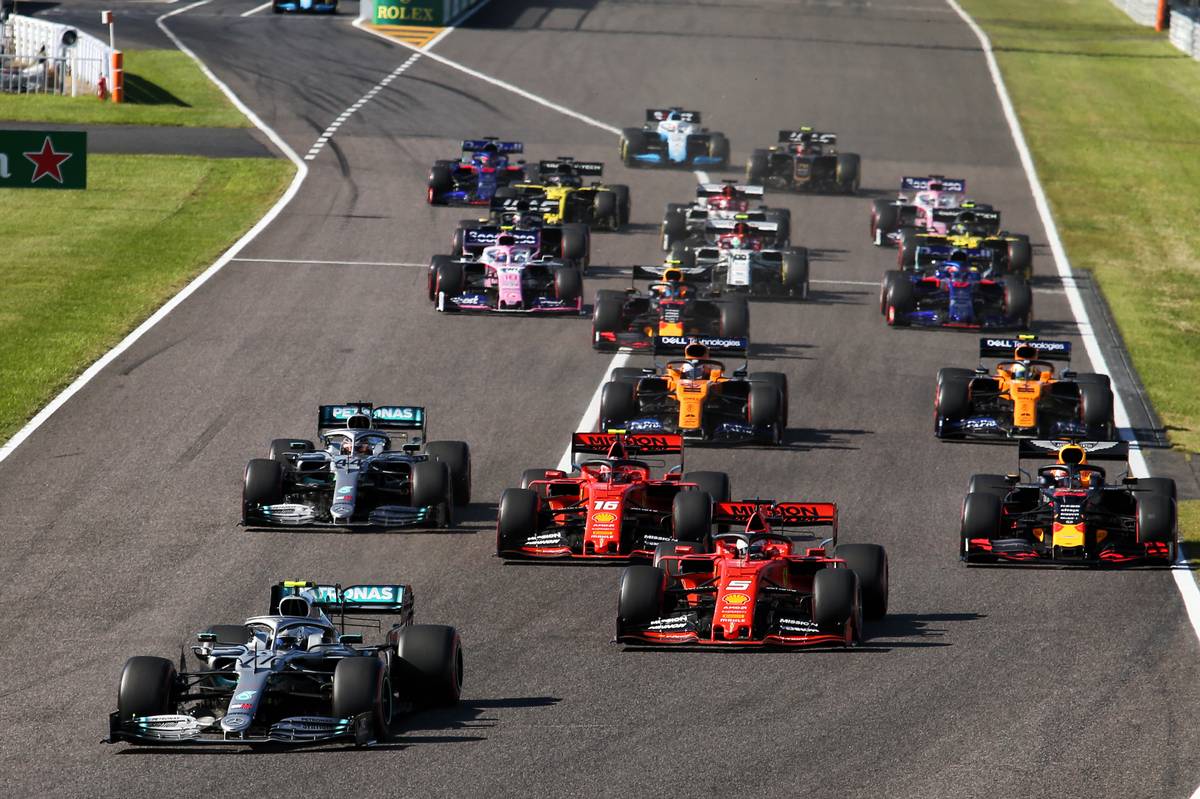 When the lights went out, Vettel stuttered off the line which allowed Bottas to get the upper hand, sweeping around the outside of the Ferrari to take the lead. Hamilton also tried a move around a slow-starting Leclerc on the other side of the track only to have to fall back in line, losing a spot to Verstappen in the process.

However seconds later, Verstappen tried his own move on Leclerc only for the cars to made contact as Leclerc ran wide and hit Verstappen, who spun off onto the grass at turn 2. The Red Bull was able to resume albeit in 18th place, while Leclerc incurred damage to his front wing. Despite shedding chunks of carbon fibre, Leclerc decided to carry on regardless until finally pitting on lap 4 and dropping to the back as a consequence. Elsewhere there was also a hot-tempered clash over fifth place between Albon and Norris at the chicane, with Norris sent into the runoff and subsequently pitting for repairs, but clearly compromised for the rest of the afternoon. 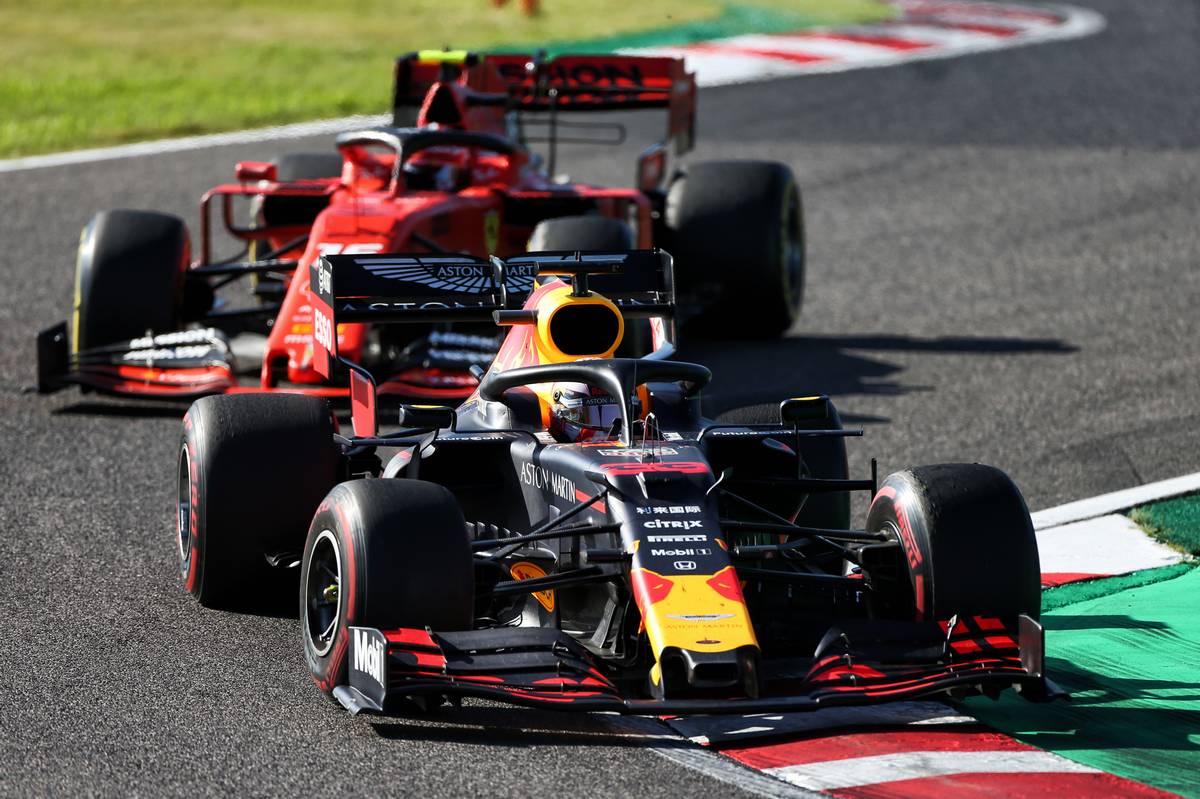 Eight laps in, Bottas had built up a 2.5s lead over Vettel followed by Hamilton, Sainz, Albon, Gasly, Lance Stroll, Nico Hulkenberg, Sergio Perez and Daniel Ricciardo. Verstappen had already recovered to 16th place with Leclerc in close pursuit; but with the RB15 carrying damage from their earlier clash, Leclerc was soon able to get past using DRS down the main straight. He followed that up with determined moves on Daniil Kvyat through Spoon on lap 12 and then Kimi Raikkonen on lap 14. In contrast Verstappen was now waning fast, and on lap 16 the team finally called him into the garage to retire due to the earlier damage.

Verstappen's team mate Albon was the first of the front-runners to pit on lap 16 for a new set of mediums, with Vettel in next time by. He slammed on the brakes as he came in to pit lane to pick up a second set of soft tyres, a move which briefly dropped him behind Sainz. Bottas immediately responded on lap 18, opting for the medium tyres and coming back out in second while Hamilton took over the lead of the race, seemingly on a one-stop strategy while those behind him were set for two stops meaning that they were now gaining fast.

Hamilton eventually pitted on lap 22, handing the lead back to Bottas in the process. He came back out in third behind Vettel but crucially ahead of the yet-to-stop Sainz, who had ten seconds in hand over Albon. Sainz duly made his stop on lap 27 for fresh mediums, a lap after Leclerc made his own second stop of the afternoon for another set of softs which allowed him to make quick work of Kvyat - again - for 11th place. The Russian had already lost two places to Hulkenberg and Perez in a single move the lap before.

Bottas continued to command the race with an 11s lead over Vettel, but Hamilton was less than happy with the team's strategy choices for him despite running in third place, with a big lead over Albon who was now up to fourth ahead of Ricciardo, Sainz, Gasly, Stroll, Hulkenberg and Perez. Ricciardo's pit stop on lap 30 - exchanging his starter mediums for a pacier set of softs to finish the day on - temporarily dropped the Renault out of the top ten, while at the same time Leclerc cruised past first Perez and then Hulkenberg to move up to eighth place. He soon put Stroll to the sword as well, and then dispatched Gasly with aplomb for sixth through Spoon. 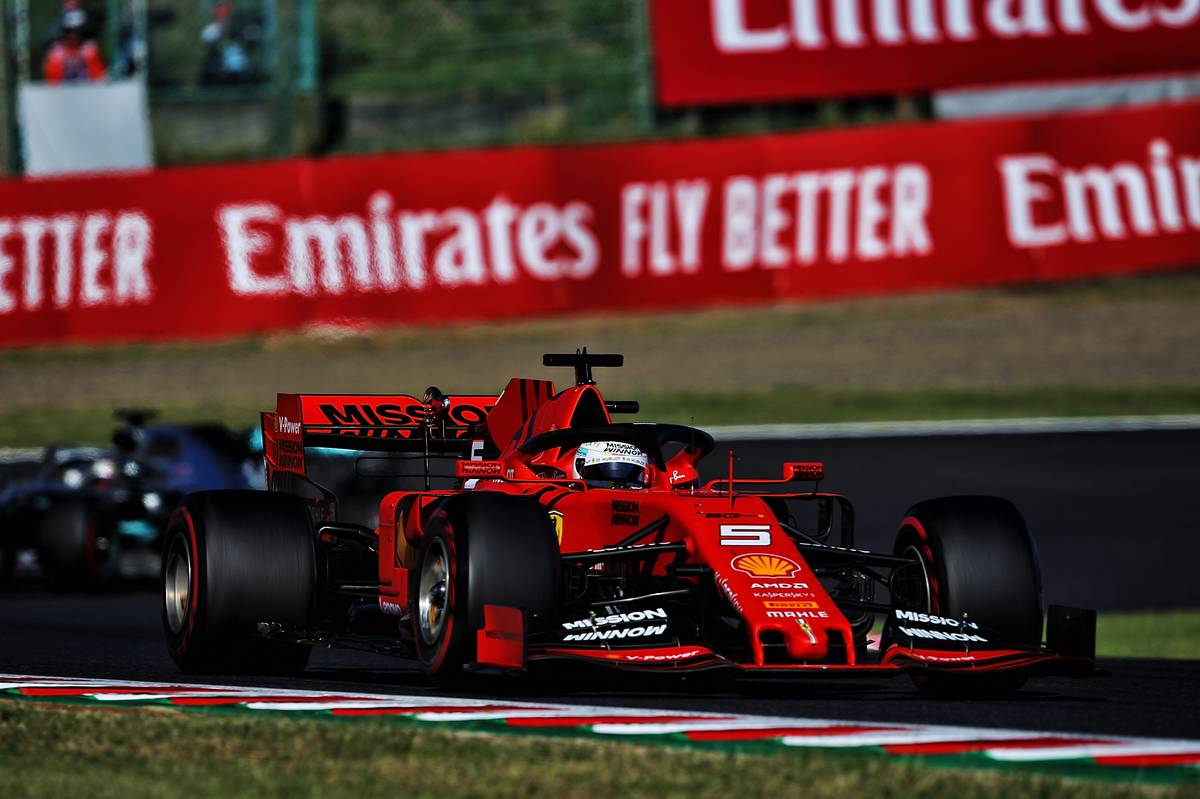 Vettel was back on pit lane on lap 32, finally switching to medium tyres and dropping 20s behind Hamilton as a result. The question now was whether Hamilton could stay out all the way to the finish while continuing to maintain sufficient speed to stay ahead of Vettel, or whether he would have to make a second pit stop of his own.

Bottas was already committed to a two-stop strategy, and was in for his second stop on lap 37 to put him back on the soft compound for the run to the finish line. That dropped him nine seconds behind Hamilton, but with the advantage of faster and fresher tyres. While Hamilton had been largely able to preserve his advantage, the team crunched the numbers and called him on lap 43 in an effort to achieve the Mercedes 1-2. Hamilton dropped four seconds behind the Ferrari as a result, meaning that he now had work to do in the remaining ten laps.

The new soft tyres played to Hamilton's advantage, and he was within DRS range of the Ferrari with five laps to go. But catching is one thing and passing quite another, especially with the SF90's straight line speed advantage, and Vettel was able to hold on to second all the way to the chequered flag. Even so, the outcome wasn't enough for Ferrari to prevent Mercedes from taking the constructors title - with a little help from a bonus point for fastest lap by Hamilton. 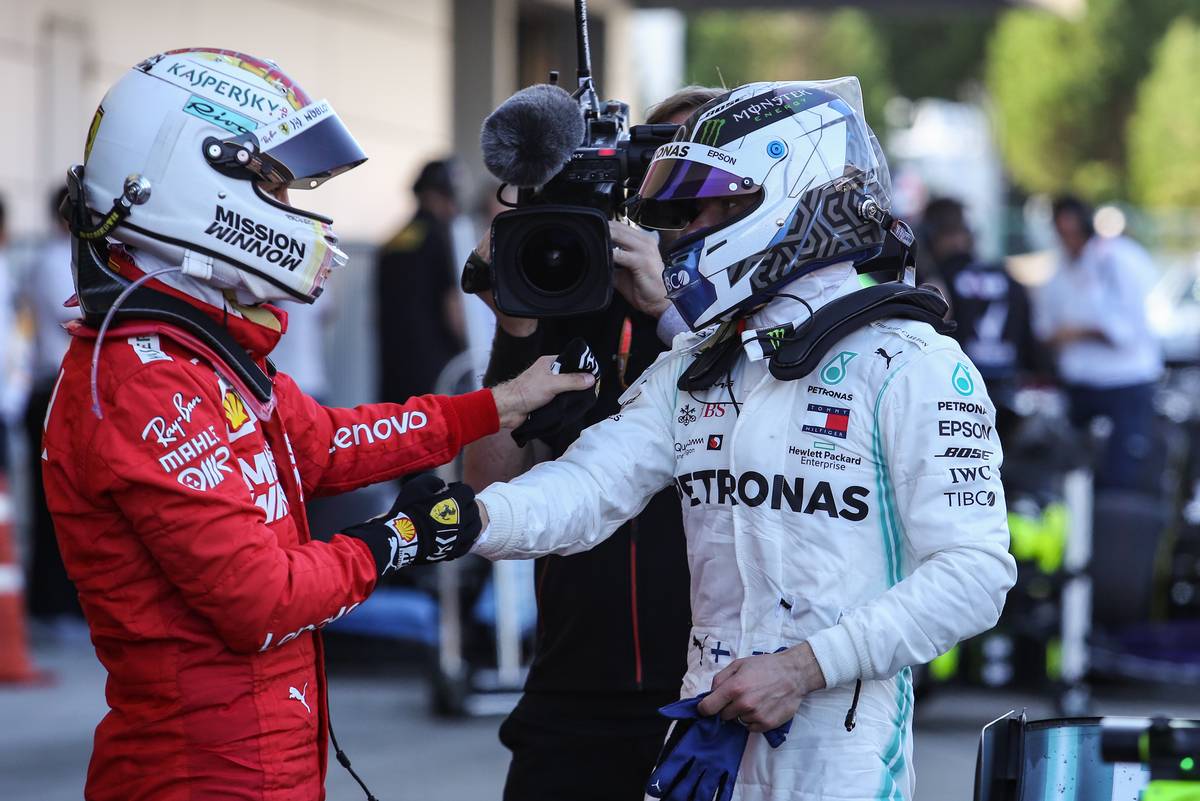 The battle over second and third place had played out well in front of Albon and Sainz, who were the only other cars still on the lead lap by the finish. Leclerc finished in sixth ahead of Ricciardo, Gasly, Perez and Hulkenberg - despite Perez spinning into the gravel on the penultimate lap, after a timing systems error resulted in the result actually being set a lap early at the end lap 52.

Missing out on the top ten were Stroll Kvyat, Norris, Raikkonen, Grosjean and Giovinazzi, with Kevin Magnussen in 17th place. The two Williams of George Russell and Robert Kubica were the final cars still running, and Verstappen the only formal retirement of the afternoon.

Today's result also means that Mercedes has won the drivers championship - making it a record sixth consecutive driver/team title combination - as Leclerc, Verstappen and Vettel are all too far behind to catch Hamilton with four races remaining. However Hamilton hasn't actually yet clinched the title: his team mate Valtteri Bottas is the only driver who can thwart him now. 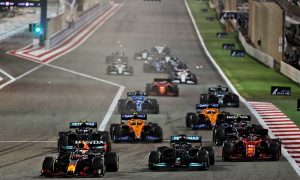