Pirelli has announced its tyre compounds for the first eight races of the 2020 season, the supplier varying its selections for the two rounds set to take place at Silverstone.

Formula 1 will begin its delayed campaign on July 5 in Austria, where the Italian company will supply its C2, C3 and C4 compounds for both races at the Red Bull Ring, but also for the following event in Hungary.

However, Pirelli's selection for the British Grand Prix will include the C1, C2 and C3 tyres but a week later, for the Emirates Formula 1 70th Anniversary event,  teams will revert to the basic middle range combination, a change that will hopefully spice up proceedings at Silverstone.

The C1 rubber will return for the Aramco Spanish Grand Prix at Barcelona, while the C2, C3 and C4 selection will once again be on offer at Spa and at Monza. 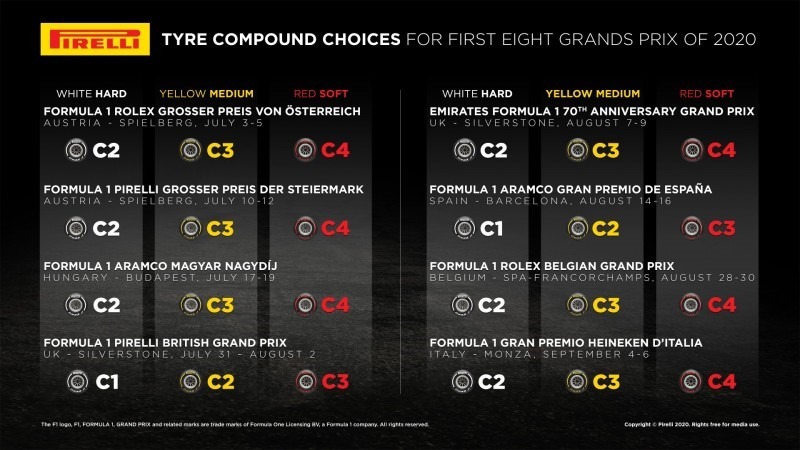 "With so many variables at the start of this delayed season, and a flexible calendar that doesn't leave much time to react to changing circumstances, it was agreed with the Teams, the promoter and the FIA to announce the compound nominations for the first eight races this year all together," said Pirelli F1 boss Mario Isola.

"As usual, these compounds have been chosen to best match the characteristics of the individual circuit and provide interesting opportunities for race strategy."

As a reminder, each driver will 13 sets available in total for the race weekend and must have at least one set of the white hard and yellow medium tyre.

Norris 'happy' to lose followers after BLM call to action