Drivers won't be able to select how many tyres of each of the three available compounds they receive for a Grand Prix race weekend in 2020, it's been announced.

Pirelli provides three different types of dry weather tyre for each event, with drivers getting a total of 13 sets in total to use over practice, qualifying and in the race itself.

Normally each driver gets to choose in advance how many of each compound they get, with some drivers opting for a greater number of the softer, faster compound while others opt to play it slightly safter with more of the durable harder rubber on hand.

But this year, due to the impact of coronavirus and the disruption caused to the 2020 calendar, the sport has decided that this season all drivers will receive the same number of each compound.

It relieves Pirelli of the need to announce the available compounds 15 weeks before flyaway races and nine weeks before events in Europe - all but impossible with the current pandemic situation.

The amended rules were confirmed on Friday and incorporated into an updated clause of the sporting regulations.

Allocations now have to be announced "unless otherwise determined by the FIA and with the agreement of the supplier, no less than two weeks prior to each event."

The changes go on to state that "Each driver will be allocated the following specification of dry-weather tyres at each event. 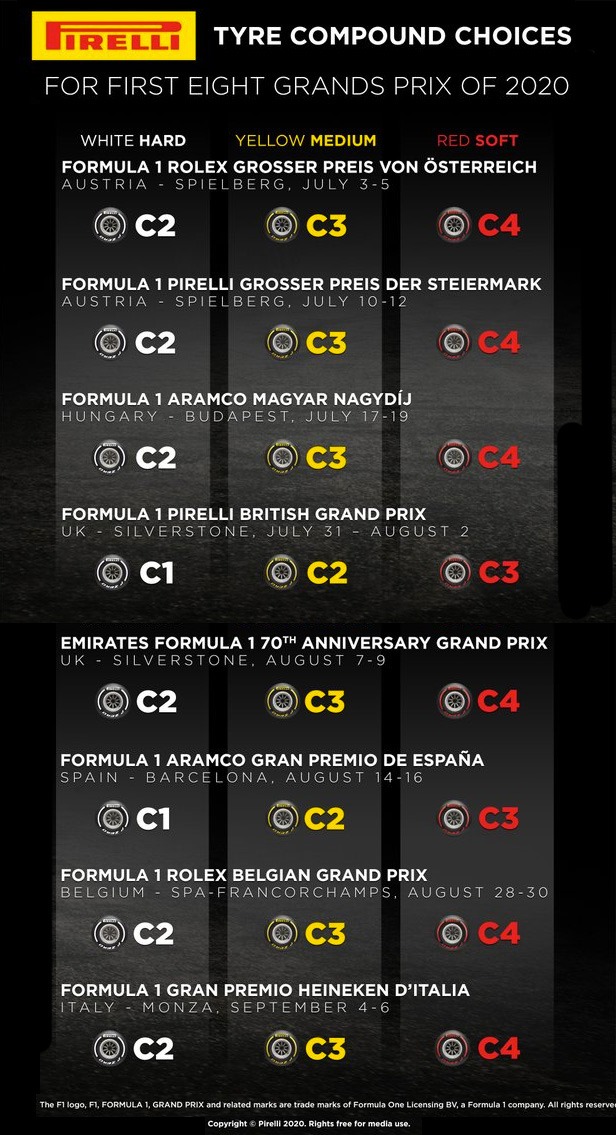 So far, eight rounds have been confirmed on the re-arranged 2020 calendar with Pirelli set to bring the C2, C3 and C4 compounds to races in Austria, Hungary, Belgium and Italy.

The line-up will vary for the British and Spanish Grands Prix, where the nature of the track in question tends to need a harder-wearing compound. At these races, Pirelli will provide the C1, C2 and C3 variants.

But as previously announced, the 70th Anniversary event - which like the British GP will be held at Silverstone - will use the softer range, in an effort to shake things up between the two back-to-back doubleheader races at the same venue.

The amended rules also address an issue concerning extra experimental tyres, where testing will be allowed to take place in the first 30 minutes of Free Practice 2 instead of at the end.

Ricciardo says driver 'egos' could be a factor in Spielberg