Formula 1's return to Imola after a 14-year absence was unanimously saluted by drivers on Saturday, with the field embracing the fast, old-school scenic layout of the Autodromo Enzo e Dino Ferrari.

Over the years, the medium downforce 4.95km circuit, which offers a mixture of slow and medium-speed corners, has been remodeled several times.

But the anti-clockwise track has retained its fast-flowing nature and its famous corners at Piratella, Acque Minerali and Rivazza.

While maximum velocity at Imola is a secondary criterion relative to balance and traction, top speed will come into play on the main straight to lend a helping hand - along with DRS - to drivers seeking to put one over on a rival.

It's usually rare for the driver on pole to top the speed trap readings, but Valtteri Bottas did just that on Saturday in qualifying, the Finn clocking in at 299.5km/h, one of the lowest maximum speed readings of the season.

Lewis Hamilton, who will line up alongside his Mercedes teammate on Sunday's grid, was just 1.8 km/h slower than Bottas.

But Red Bull's Max Verstappen, who was third in qualifying, might be hard-pressed to keep up with the Black Arrows this afternoon. The RB16 is a force to be reckoned with in the corners but loses out in terms of maximum speed relative to its rivals.

Mercedes' chargers and Verstappen will start on Pirelli's medium tyre, but the lack of long-running on Saturday and tyre data due to the weekend's compressed format could lead to different in-race tactics, depending on either team opting for a one or two-stop strategy. 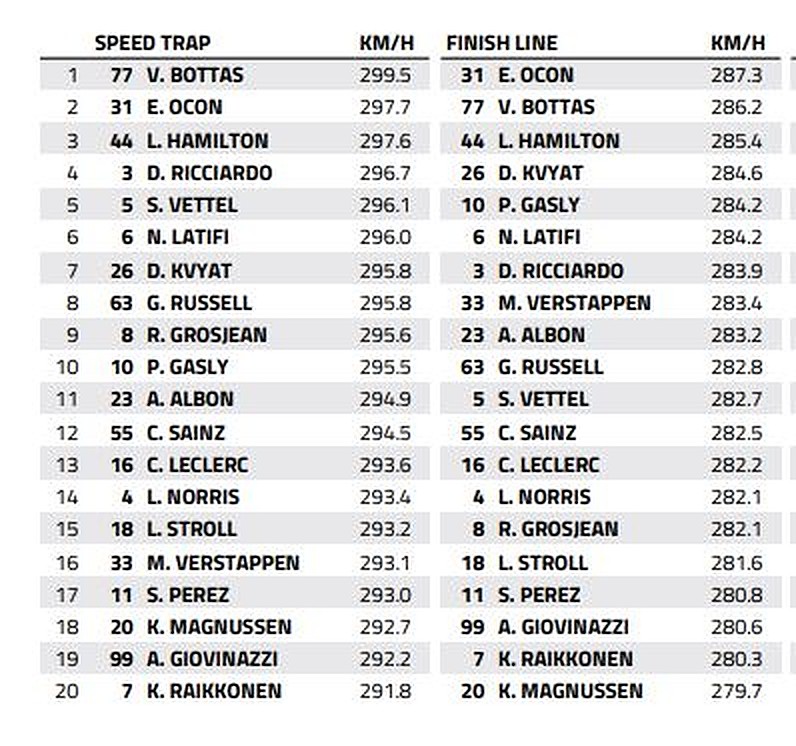 Grosjean has 'some good contacts' with IndyCar teams for 2021