George Russell celebrated his return to F1's Virtual GP series on Sunday, the Williams driver edging Alex Albon at Silverstone after the Red Bull driver was hit with a time penalty.

Russell, who won last year's Virtual GP series winner but was unavailable to take part in last week's opening round in Austria, launched his race from fifth on a grid where positions were once again determined by a sprint race involving pro Esport racers.

Brendon Leigh's victory for Ferrari in the 5-lap event handed pole position for the British GP to Callum Ilott, with Albon sharing the front ahead of Alfa Romeo's Thibaut Courtois and McLaren's Jimmy Broadbent.

Ilott held his own in the opening laps while an incisive Courtois quickly put one over Albon, with Russell moving up to P4.

The Williams driver took advantage of a close wheel-to-wheel battle between Courtois and Albon to pass both drivers and set off in pursuit of leader Ilott.

The Ferrari driver swapped his soft tyres for a set of mediums on lap 10 just as Albon overtook Russell and took command of proceedings. But the Red Bull charger was then handed a 3-second time penalty for repeatedly exceeding track limits. 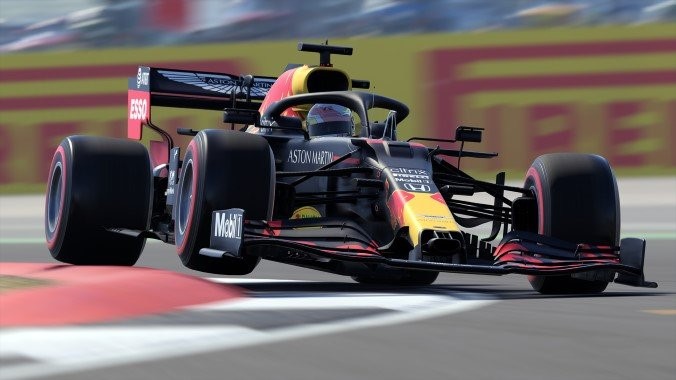 Albon and Russell remained on their own up ahead until the pair pitted for softs. Ilott found himself once again in the lead but could do nothing to contain the dueling Albon-Russell duo.

Russell appeared to remain just close enough to his rival to finish second on the track and win on time, but the Williams driver's killer instinct kicked in and the pair enjoyed a battle royal on the final lap.

Albon edged Russell on the track but the latter took top spoils when the Red Bull drivers' time penalty was applied.

Ilott completed the podium, despite also receiving a time penalty, while Pietro and Enzo Fittipaldi finished P4 and P5 for Haas, with Liam Lawson rounding off the top six for Red Bull.

Almost a clean sheet for @thibautcourtois... but two got past him 😉@GeorgeRussell63 and @alex_albon put the moves on the Belgium keeper in the early stages of the Virtual British Grand Prix!#VirtualGP 🎮 #F1 pic.twitter.com/HB46PaEnHT