Last December, the Financial Times reported that F1 was eager to continue its expansion beyond television broadcasting, with outgoing CEO Chase Carey admitting at the time to "substantive discussions with Amazon and all the global digital platforms".

The American online retailer giant has been aggressively expanding its portfolio of live sports streaming rights in recent years, adding to its catalogue the UEFA Champions League, the English Premier League, the NFL, for which it paid $130m for exclusive digital rights to a package of 11 Thursday Night Football games, the US Open tennis tournament, and other sports rights.

F1 currently streams for viewers in selected countries its races on its own pay-per-view platform, but placing its content with additional digital partners would help it expand its audience, and lure a younger demographic of fans while unlocking new revenue.

"Netflix we talk to anyway, that’s a different situation, and they maintain their positioning that they will not be in the business of acquiring live sports rights. It would be nice if they did, but let’s see.

"One is, you’ve got Amazon Prime, which is where you see the content they buy — quite a lot of tennis, depending on where you are — it sits within their content offering. If you’re a Prime subscriber, you get that content for free.

Holmes explained that F1 could contract with Amazon on the basis of a rights deal that would allow it to stream races while also offering on its platform the sport's F1 TV service.

"One or two places, we’re talking to them about specifically acquiring our rights, in the same way you would sell to any other media company," he added.

"But we’re also talking to them about a Channels arrangement where we have got the opportunity of putting F1 TV into the market.

"Now, could you do a deal where on the one hand they acquire your rights, we carve out F1 TV and F1 TV is carried on Channels? Maybe. They’re no different from any other pay-TV offering, in the sense that if they’re acquiring the rights, they may want exclusivity.

"But in some markets, they’re not acquiring the rights, and some of the markets we’re talking to them about Channels, and we already have a deal in place with another party, so we couldn’t do the rights side. 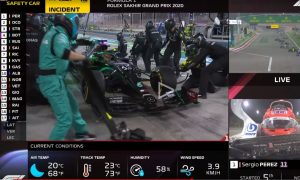