Maximum velocity at Imola is a secondary criterion relative to balance and traction, but a car's top speed - along with DRS - will prove useful on Sunday on a track where overtaking opportunities are typically few and far between.

In qualifying on Saturday, the fastest car in a straight line was the Mercedes-powered Williams of George Russell. But the Briton's top speed was 5 km/h slower than last year's top velocity, while Bottas was approximately 8 km/h slower than his last visit to Imola.

Given relatively identical running and fuel load conditions compared to last November, the difference for Mercedes is likely rooted in this year's aero changes.

However, conversely, Williams' 2021 charger has gained a bit of velocity, a welcomed improvement that provided a bit of a tail wind for Russell and teammate Nicholas Latifi who both made it into Q2.

Could the Williams chargers spring a surprise this afternoon in the hills of Imola?

"I think we've got the fastest car on the straights," rightly commented Russell. "So it's all looking promising.

"But this is the true pace of the car. It may be one of our better circuits, but this is where I hope and expect to be for most of the season, you know, in the mid-range of Q2 and hopefully at points fighting for Q3." 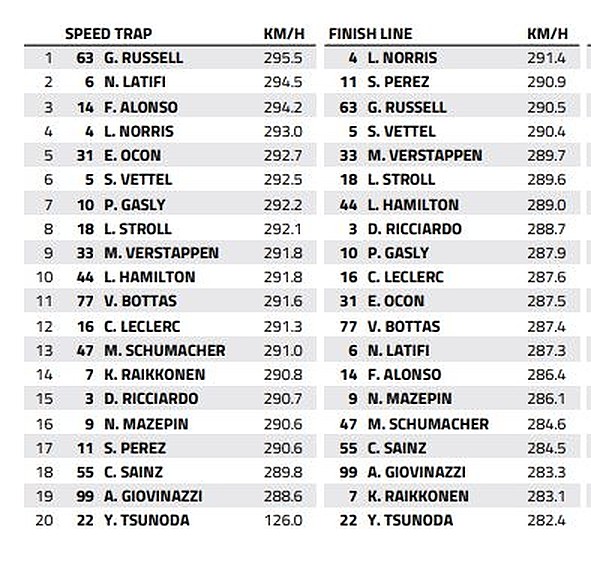