Valtteri Bottas is still deeply unhappy with the 'harsh' three place grid penalty he received on Friday for an incident that took place in second practice, which has now cost him a front row start in the Styrian Grand Prix.

Bottas finished in second place in qualifying, but will drop to fifth on the grid on Sunday as a result of the sanction handed down to him by the race stewards. His place at the front will be taken by team mate Lewis Hamilton.

The penalty was in response to a scary moment in FP2 when the Finn lit up his rear tyres exiting his pit box, and slid into area outside the McLaren garage.

The stewards suggested this could "be considered as potentially dangerous driving" as a crew member could have been hurt.

"My personal view [is] it’s quite harsh," Bottas said when asked about the decision. "I never imagined after that, that there would be a penalty.

“We decided to try something different, launch with a second gear, because sometimes with the higher gear, you have lower revs and maybe you can manage the wheelspin or the initial part is not so aggressive.

"Once I got the wheelspin it really caught me out. Perhaps the line on the pit lane was slightly damp from the drizzle," he said. “I just couldn’t hold it, obviously quite a different behaviour for the second gear than the first gear.

Bottas had been critical of McLaren bosses who were quickly in touch with race director Michael Masi to complain about what had happened.

"Of course other teams, when there’s an opportunity they complain that it’s dangerous, etc., so we get penalised," he said "That’s how it goes. Everyone’s trying to screw you over in this sport." 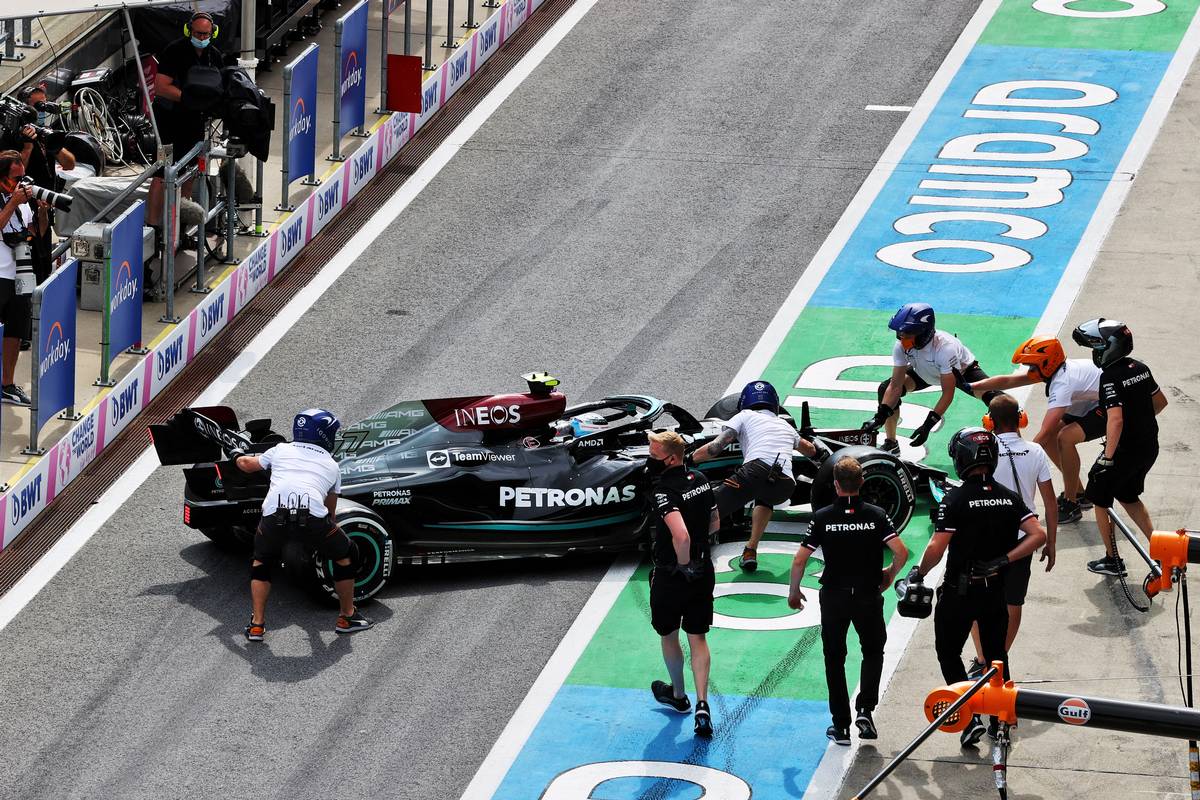 In fact, on this occasion McLaren principal Andreas Seidl agreed with the driver about the penalty.

"Of course it looked scary but on the other hand that can happen when you leave these pitstop positions, also with the paint that is on the ground," he told Sky Sports F1 this morning.

“I don’t know exactly what the reason was why he spun. The most important thing is that no-one was hurt," he added. “We tried to help get him going again with our crew. We just have to move on from this.”

Having gone into qualifying aware of the impending penalty, Bottas was pleased to have ended the session in second place to minimise the impact.

"Max and Red Bull were faster today," he admitted. "It was a good lap and I’m pleased for that, but of course it’s a shame I have the penalty.

"I don't think there was another two-tenths to find with our package today so I think we maximised what we could. 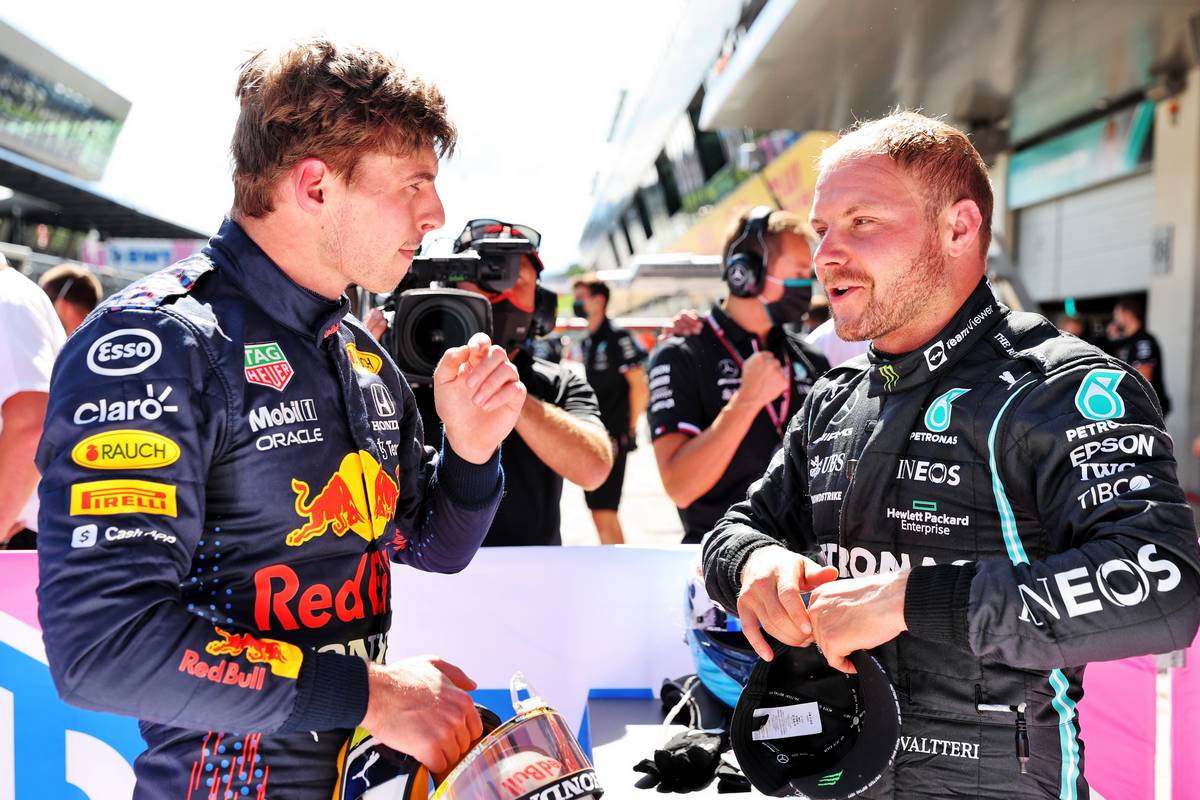 "I honestly think it was a good qualifying," he said. "I was definitely lacking a bit of pace on Friday and was a bit confused which way to go.

"I’ve been a little bit lost with set-up during the weekend so far, but then to be able to go in the right direction with the set-up.

"We’ve been working closely with Lewis as well in trying to find the optimal set-up and definitely got some guidance from his side of the garage," he acknowledged.

"By working as a team we found the right direction, and I think thanks to that I found the confidence in the car," he said. “It was a lot better feeling, really felt good in the car and felt like I got the most out of the car.

"Just the first run in Q3 I had traffic with Tsunoda, so I lost a couple of tenths there. So I don’t know, maybe there was a bit more to come.” 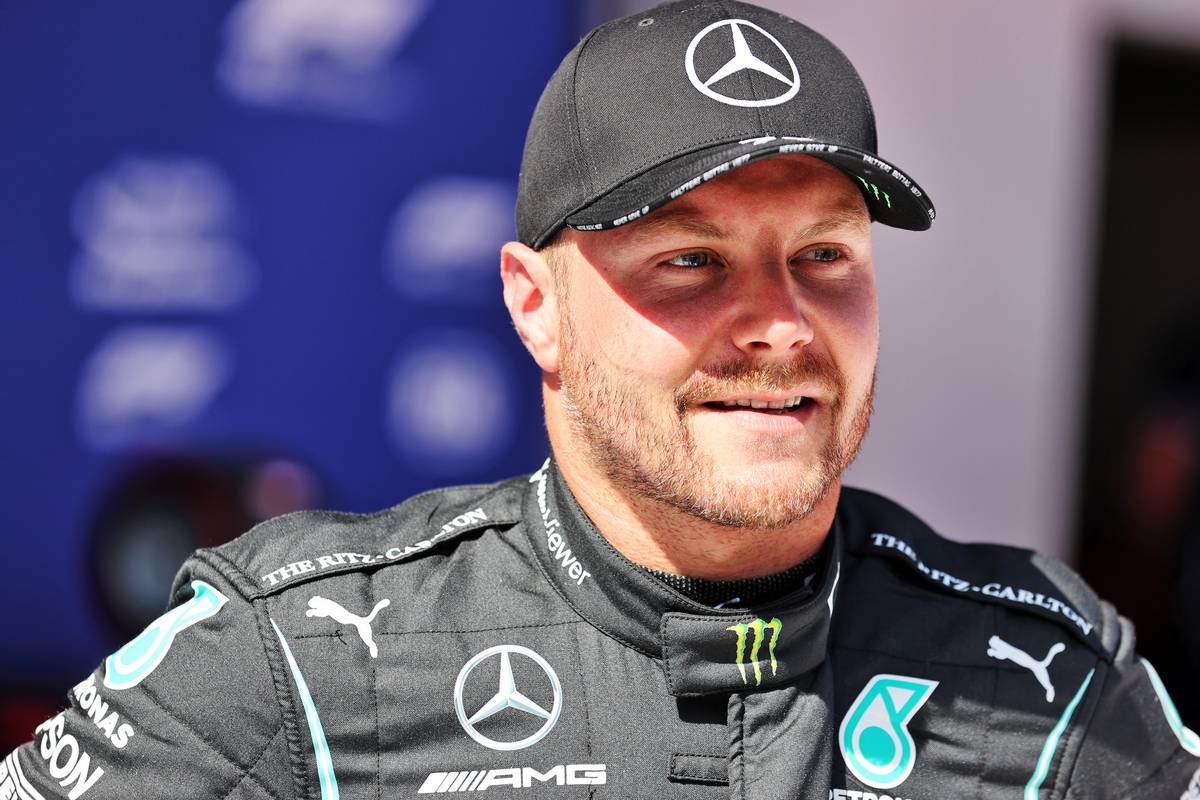 Yuki Tsunoda has now been handed a three place grid drop of his own for impeding Bottas during qualifying, meaning the AlphaTauri driver will drop to 11th place on the grid.

As for Bottas, he still believes that a a strong result remains possible on Sunday, especially starting on the medium tyres.

"The medium should be the better race tyre for our car, even though the Soft runners around me will have a small advantage at the start.

"The key will be to get past them quickly tomorrow. Obviously I'd rather start second than fifth but it is what it is, I need to deal with the consequences.

"It will be close with Red Bull, so far this season they've had the edge in qualifying and it's been tight in the races so we're looking forward to it.

Russell says Williams 'there on merit' after missing Q3 by 0.008s

Ricciardo baffled by Q2 exit and sudden lack of pace