George Russell will get a head start on his 2022 preparations with Mercedes, with the Briton running on both days of this week's post-season Pirelli test at Yas Marina.

With Sir Lewis Hamilton due to receive his Knighthood at Windsor Castle on Wednesday, and Valtteri Bottas released by Mercedes to run with Alfa Romeo this week, Russell will handle testing duties for Pirelli on-board the Brackley squad's 18-inch wheel mule car exclusively on his own.

All teams, bar Williams, will field a mule car for one of their regular 2022 drivers on Tuesday and Wednesday, although Ferrari will also entrust its machine for half a day to sim driver Antonio Fuoco.

In addition to Russell switching mounts at Yas Marina, Bottas will showcase his new Alfa colors, as will his teammate, Chinese rookie Guanyu Zhou. 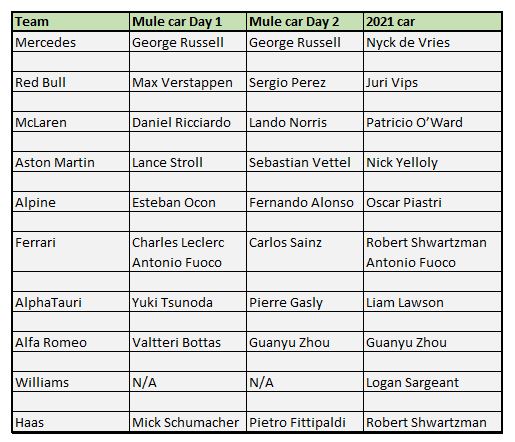 But all teams, including Williams, will also roll out a 2021-spec car for the young hopeful of their choice for the latter to showcase his talents exclusively on Tuesday.

Most of the young drivers who will take to the track have experience of older-spec F1 machinery.