Charles Leclerc claimed his third pole position of the season, with Carlos Sainz bouncing back from his Friday accident to help secure a Ferrari front row lockout for Sunday's inaugural Miami Grand Prix.

Despite going into the final run on provisional pole, Max Verstappen made a mistake and aborted the lap leaving him settling for third place on the grid alongside Red Bull team mate Sergio Perez.

And a strong final lap from Valtteri Bottas means that the Alfa Romeo driver is one place ahead on the grid from his former Mercedes colleague Lewis Hamilton, who will start tomorrow's race from sixth.

Things were certainly heating up heading into the crucial qualifying session for the inaugural Miami Grand Prix - and it wasn't just all the hype or the heat and humidity that was causing the teams and drivers to sweat at Miami International Autodrome. There had been all kinds of incidents in the three practice sessions, with a red flag in each - the latest for a heavy accident for Esteban Ocon in FP3 which had ruled the Alpine driver out of qualifying, due to a crack in the A522's chassis necessitating a complete rebuild before tomorrow's race.

His absence meant that the first of the five drivers who would fail to progress beyond Q1 was already known. As for the others, it was genuinely hard to predict with the wild swings in the timesheets on display at the end of Saturday afternoon's session suggesting no one could count themselves safe and a few surprises were sure to be in store. 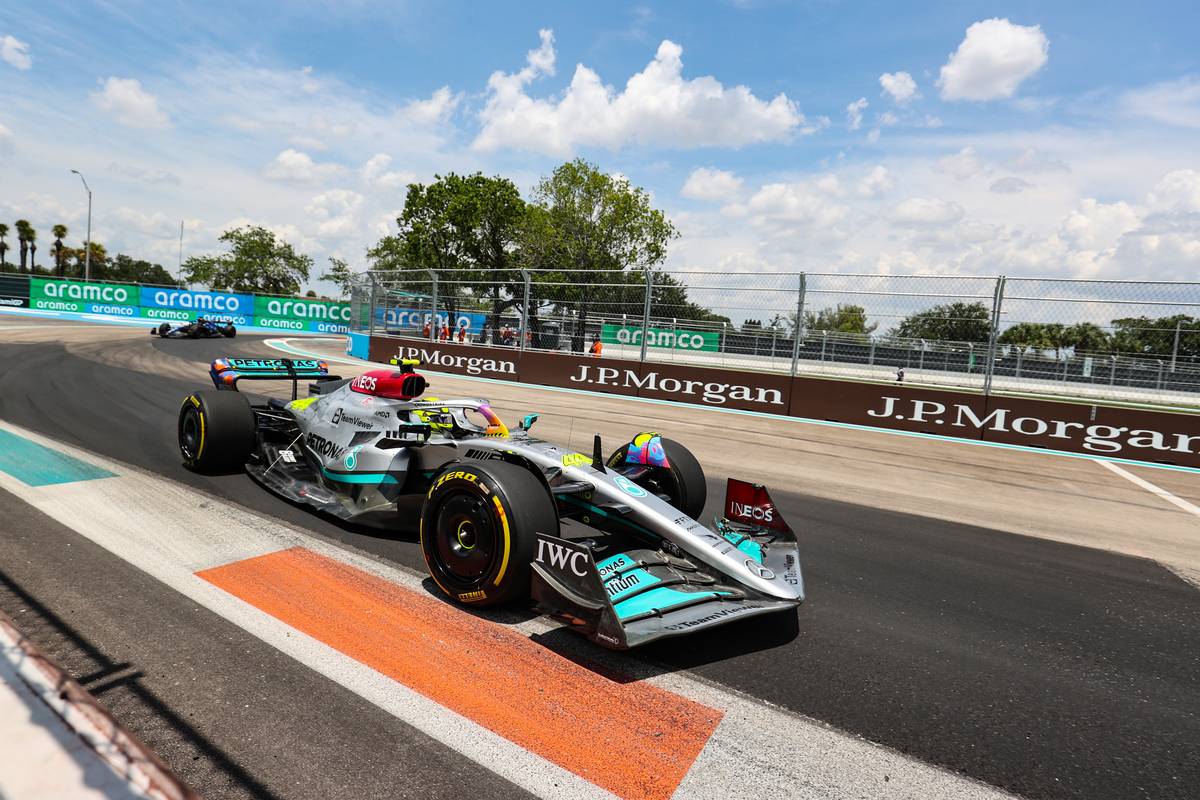 Q1: Leclerc quicker than the Red Bulls, as Hamilton leaves it late

First out on track when the lights at the end of pit lane went green were the Haas pair of Kevin Magnussen and Mick Schumacher, who had finished FP3 in the top ten. Hot on their heels were Aston Martin duo Sebastian Vettel and Lance Stroll, along with Williams' Nicholas Latifi and Alex Albon.

Despite problems with his radio, it was Magnussen who set the first time of the session with a lap of 1:33.148s on the soft tyres. Albon promptly beat that by almost seven tenths. Stroll briefly went quickest but by now the Ferraris were up and running, Carlos Sainz soon taking control of the proceedings with a time of 1:30.858s, half a second quicker than team mate Charles Leclerc. That gave Daniel Ricciardo plenty of room to slot his McLaren in between the two Prancing Horses.

Then it was Red Bull's turn to move the goal posts, Max Verstappen immediately quickest of anyone on 1:30.235s. That was half a second clear of his team mate Sergio Perez who just pipped Mercedes' George Russell to provisional second, but Lewis Hamilton was forced to back off on his first run and then had a big scare on his second push lap leaving him out of position in the timesheets in tenth, over a second slower than Verstappen.

Zhou Gaunyu popped up to fifth place with his first run, but there was a wait for his Alfa Romeo team mate Valtteri Bottas to exit the pits and join him out on track. Holding back was probably a shrewd move, as the track visibly evolved with every passing moment as proved by Leclerc's latest lap of 1:29.474s. It put him over three tenths ahead of Verstappen, Sainz, Perez, Ricciardo, Stroll and Lando Norris. Not improving was Hamilton, with a another mistake after going too deep into the chicane leaving him provisionally in the drop zone along with AlphaTauri's Pierre Gasly and the two Williams drivers.

Hamilton needed an urgent pit stop for fresh tyres before committing himself to one final push. Despite traffic proving to be a complicating factor, he was fast enough to leap into the safety of fifth place. There were also quicker laps from Fernando Alonso and Lance Stroll who went sixth and seventh respectively, pushing AlphaTauri's Yuki Tsunoda down to eight followed by Russell and Ricciardo. Those missing out on progressing to the second round were Magnussen, Zhou, Albon and Latifi, as well as the absent Ocon who will start the Grand Prix from the back of the grid n the rebuilt Alpine. 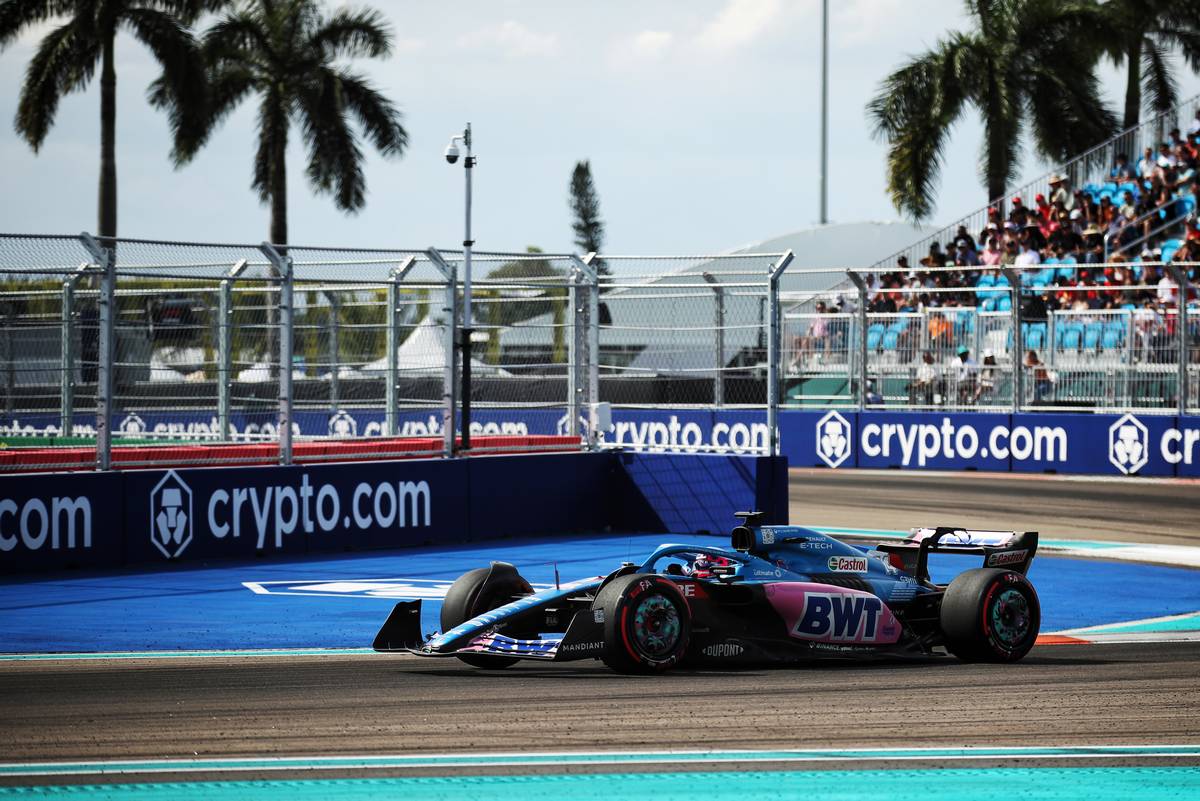 Q2: Leclerc stays in charge, but Alonso and Russell miss the cut

Ferrari and Red Bull wasted no time getting their cars back out when the second round went live. Mick Schumacher's initial offering of 1:30.423s was soon bettered by Leclerc, but Sainz then pipped the Monegasque by 0.025s to go top - before a gamechanger lap from Verstappen put the reigning champion top with a time of 1:29.202s, with Perez second. After his first round struggles, Hamilton seemed to have rediscovered something of his mojo and checked in to fifth place, but Russell didn't complete his run.

After briefly returning to the Mercedes garage, Russell was still struggling for grip and suffered two big moments in quick succession forcing him to back off again. With the clock counting down, he was running out of time to set a time to get him out of the drop zone. The Briton finally completed a decent lap which put him into seventh, which had the effect of knocking Norris down into the bottom five along with Stroll, Schumacher, Vettel and Ricciardo.

There was still more time to find on the evolving track, as Leclerc's 1:29.130s putting him 0.072s ahead of Verstappen proved all too clearly. The top five drivers were now looking assured of getting through but it was too close for comfort for everyone from Gasly in sixth down to Ricciardo in last place with one final chance to improve their fortunes.

Vettel did indeed find more time and went eighth, and his team mate Stroll did even better to go sixth. Norris also found something special to bound into third while Bottas found safety moving ahead of Hamilton and the two AlphaTauris. It looked like Ricciardo was also in with a chance of making the cut, only for the McLaren to lose too much time in the final sector. Joining him on the sidelines for the remainder of qualifying were Alonso (complaining of being impeded by Sainz on his run), Russell and Vettel (who admitted to a mistake at the chicane). All three were covered by a mere half of a tenth of a second, followed by Schumacher who was slowest as the chequered flag brought Q2 to a breathless finish. 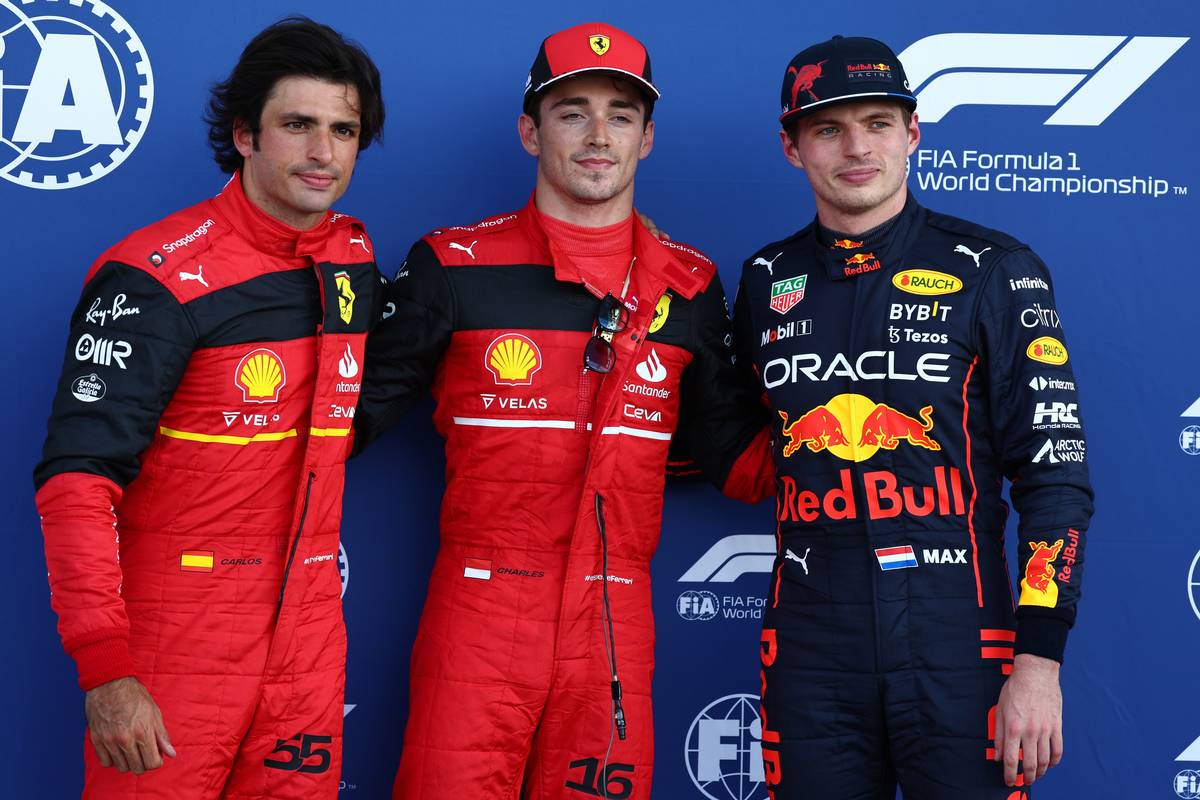 Now it was time to see if Leclerc could maintain his advantage over Verstappen and claim pole position for Sunday. First blood actually went to the Dutch driver with a time of 1:28.991s but that was just 0.064s ahead of Leclerc with Sainz a mere 0.016s further back. It could hardly be closer.

Behind the top three there was a half second gap to Perez in fourth, then a further four tenths back to Bottas who was in fifth ahead of former team mate Hamilton with another big gap to Norris, Tsunoda, Stroll and Gasly after the initial runs.

There was a lull before Stroll headed out with three minutes remaining on the clock, followed by the two Ferraris. After that everyone was in motion and hoping to have the whip hand of being the final car to cross the line in time to start their final flying lap with the track at its quickest.

Leclerc was pushing hard to the point of making a slight mistake at the apex of turn 5. Even so he did enough to go two tenths quicker than Verstappen, who had been forced to abort his lap after making an error of his own at the same corner. Sainz was now the only threat to Leclerc, but despite going quicker in the first sector hew wasn't able to sustain the pace for the entire lap and had to settle for making it a Ferrari 1-2 front row grid lockout for Sunday's race.

Verstappen will be joined on the second row by his team mate Perez, while a final run from Bottas kept the Finn ahead of Hamilton. The rest of the places were taken by Gasly, Norris, Tsunoda and Stroll.