Max Verstappen overcame an early spin and problems with his DRS system to claim a hard-fought victory in the Spanish Grand Prix, with team mate Sergio Perez making it a decisive Red Bull 1-2 in Barcelona.

It means Verstappen takes the championship lead for the first time in 2022, after Ferrari's Charles Leclerc suffered a power unit failure forcing him to retire on lap 27 having comfortably controlled the race up to that point.

George Russell picked up the final podium position for a significantly improved Mercedes, Lewis Hamilton making a strong recovery from a first lap collision with Haas' Kevin Magnussen to finish in fifth behind Carlos Sainz.

The rain in Spain was nowhere to be found and it was the unrelenting, searing sunshine that was firmly in charge over the Circuit de Barcelona-Catalunya, as the cars sizzled on the grid in readiness for the start of the Spanish GP with Charles Leclerc on pole position and Max Verstappen alongside him. 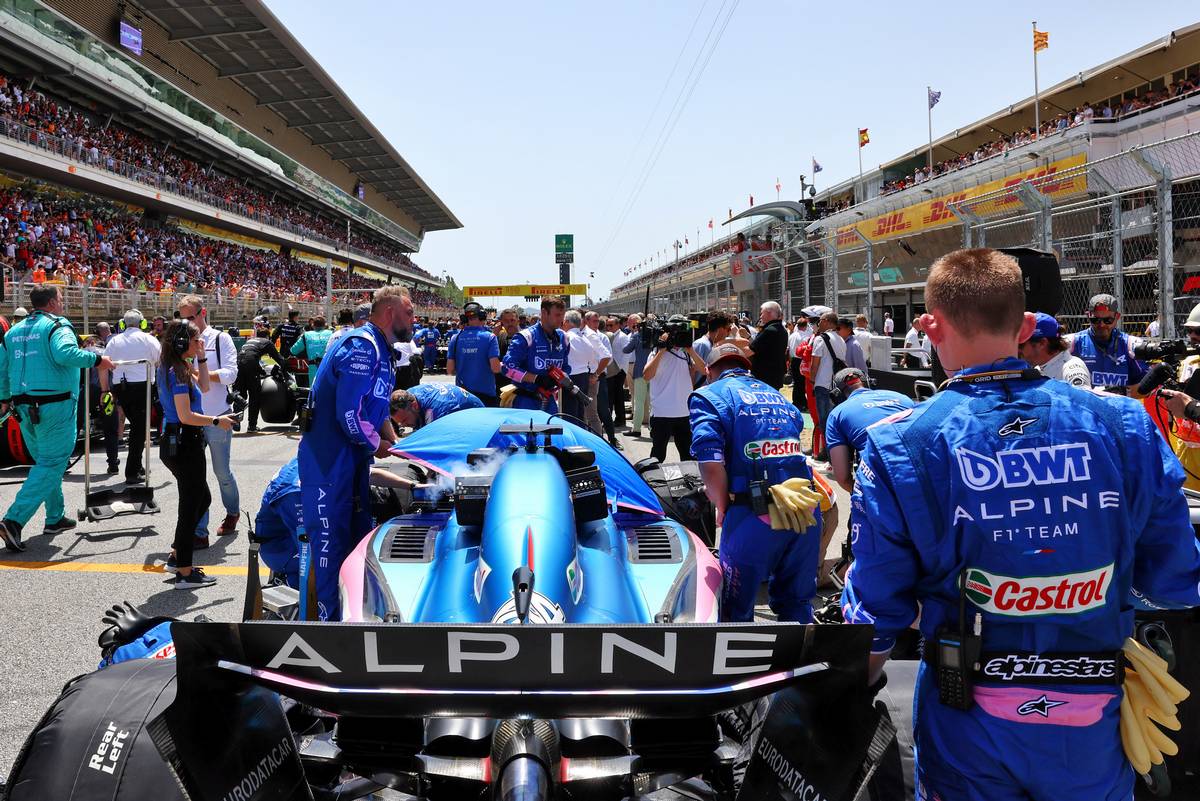 While this was a familiar look to this front row - the Ferrari and Red Bull had been at the front for four of the first six races of 2022 - no one could afford to take the outcome of today's race for granted. The question of what effect the heat might have on the cars and tyres was forefront in everyone's mind. The resurgence of the upgraded Mercedes was also a new element in the mix with George Russell starting fourth alongside Carlos Sainz and Lewis Hamilton sharing the row behind with Sergio Perez. Of the 20 cars, only one - that of Hamilton - was starting the race on medium tyres rather than the soft compound.

When the lights went out, Leclerc had his hands full to fend off the faster-starting Verstappen in the run down to the first corner, but he did manage to retain the lead. His team mate Sainz was less fortunate, suffering a terrible launch that immediately handed third place to Russell, and then also losing out to Perez as he struggled to regroup. 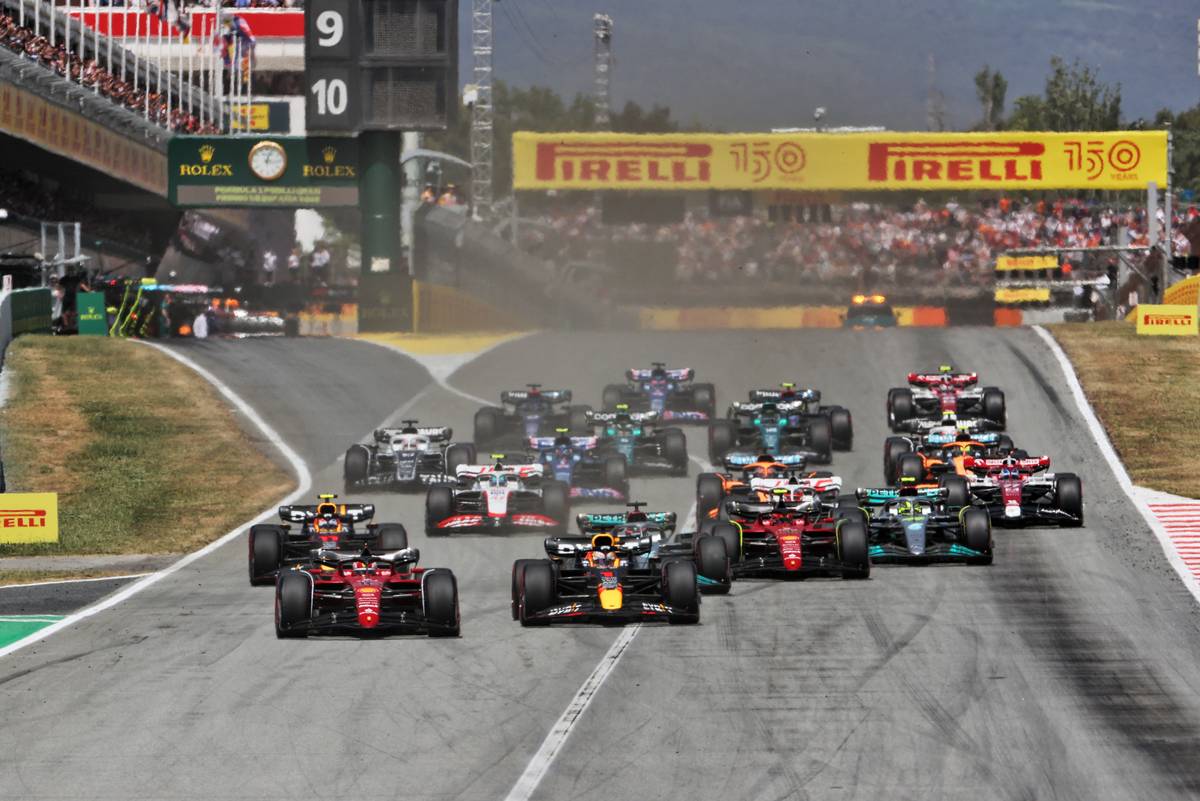 Hamilton was also in the wars, clashing with Kevin Magnussen in turn 4 which spat the Haas into the gravel and left Hamilton limping back to pit lane with a front left puncture. His daring tyre gambit had been for nought as he rejoined at the back, even suggesting to the team that they simply call it a day - a strangely defeatist comment from the normally 'never say die' seven-time world champion. The Mercedes pit wall were having none of it and told Hamilton that eighth place was still possible.

After Miami, Leclerc was being careful not to overstress his tyres and simply content to stay out of DRS range of Verstappen in second followed by Russell and Perez. Sainz' day went from bad to worse on lap 7 when he spun backwards into the gravel at turn 4 in a solo accident that dropped him from fifth to P11 by the time he got back underway. That promoted Valtteri Bottas up to fifth ahead of Esteban Ocon, Mick Schumacher and the McLarens of Daniel Ricciardo and Lando Norris with Yuki Tsunoda's AlphaTauri rounding out the top ten. Further back, the Spanish fans roared with approval as Fernando Alonso - having been required to start from the back after overnight changes to the Alpine - picked off Sebastian Vettel for P13 and then quickly dispatched Pierre Gasly for good measure to claim twelfth.

While the top two gradually pulled away, Russell was coming under pressure from Perez. And then on lap 9, the near-unthinkable happened when Verstappen suddenly spun off in a virtual replay of Sainz' earlier mishap at turn 4. The Red Bull speculated that a gust of tail wind had destabilised the car, as Verstappen busied himself in getting back on track to resume in fourth place. Perez quickly played the team card and moved aside to allow Verstappen back into third, and then it seemed a formality that he would quickly pick off Russell back into second - only it didn't happen that way. The Red Bull's DRS not engaging when he needed it most, in an echo of the malfunction that had afflicted his final qualifying run on Saturday. 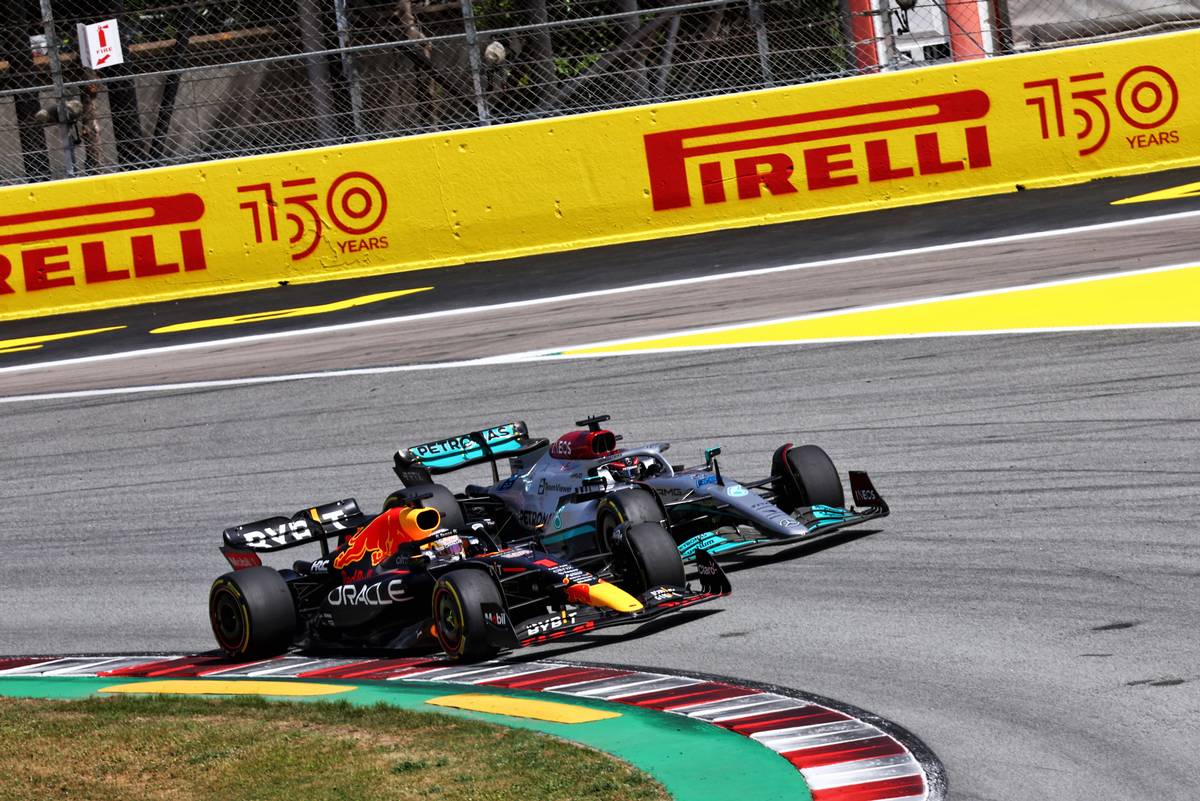 Russell and Verstappen both pitted on lap 14 for medium tyres, the first of the leaders although a number of those further back including Sainz and Ricciardo had already done so. Verstappen's race engineer had good news for his driver, reporting that the DRS had worked on the in-lap, but it remained unpredictable and it misfired again when he tried to use it on lap 16. Meanwhile Russell had problems of his own with warnings to cool the Mercedes down. All of this was good news to Leclerc, who was yet to stop and had pulled out a 16s lead over Perez.

The Mexican pitted on lap 18, coming back out behind the ongoing battle between Russell and Verstappen. Told that Perez looked to be attempting a one-stop strategy, Russell's response was succinct and sceptical: "Blimey!" bu the had little time to dwell on it. When Verstappen's DRS did activate it took all of Russell's skill to stay ahead; but when it didn't, Verstappen didn't have enough speed to claw his way past. Increasingly frustrated, he had a wake-up wobble going through turn 8 as he fumed about the DRS situation; almost in sympathy, Russell had one of his own under the pressure. 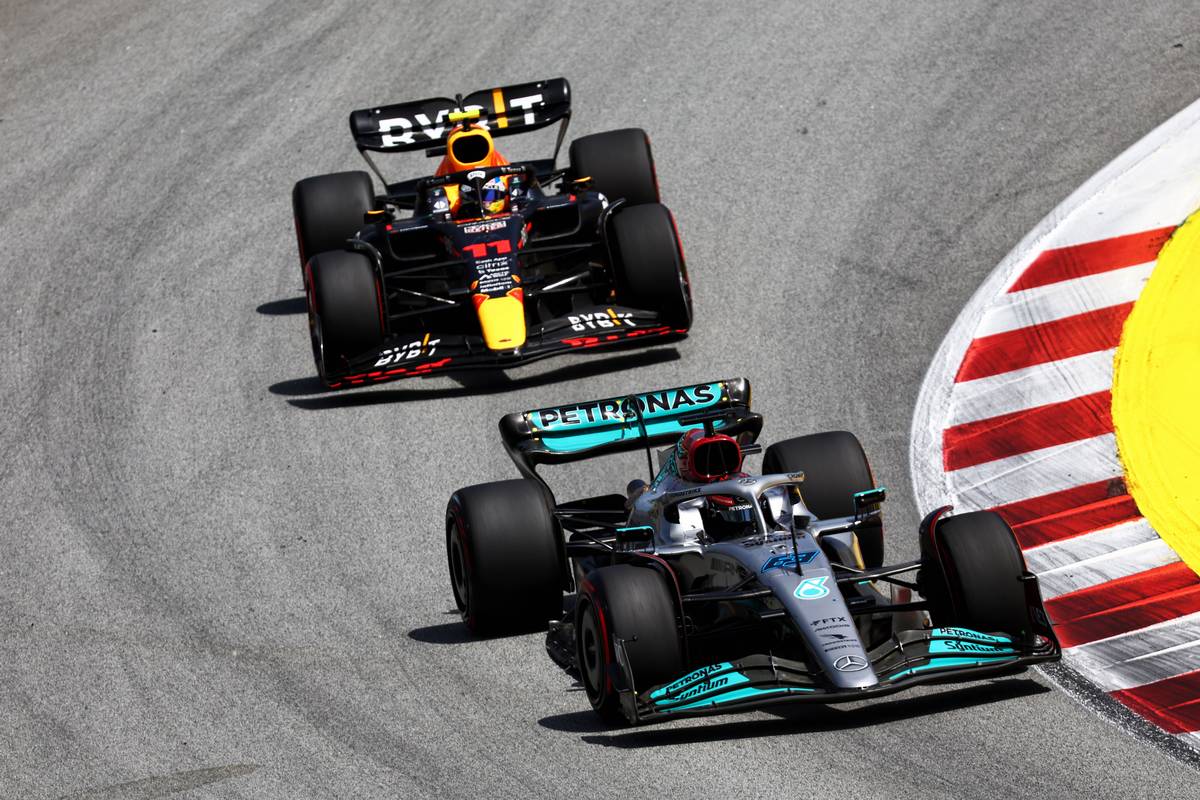 Leclerc was the last driver to pit on lap 22, having pulled out more than enough of a gap over Russell and Verstappen to resume in the lead. Red Bull continued to work the DRS problem with advice to Verstappen on when to activate DRS. He finally got it work when he needed it at the start of lap 24 and sent the car down the inside of turn 1, but Russell was somehow able to sweep around the outside of turn 2 to head into turn 3 side-by-side and retain second place into turn 4. After that, another DRS no-show for Verstappen allowed Russell to get some relief.

The battle was also being fought over the airwaves, the Red Bull pit wall making pointed comments about Russell moving under braking and not leaving enough room in the certain knowledge that race control would be listening and making notes. The stewards weren't impressed and decided against taking any action. Perez had now caught up to the battle, and having pitted later he was on fresher tyres. He appealed to the Red Bull pit wall to be allowed to pass Verstappen and try his hand at dispatching Russell himself, but the response was a firm no - a clear indication that number two status had been assigned within the team even at this early stage in the season. 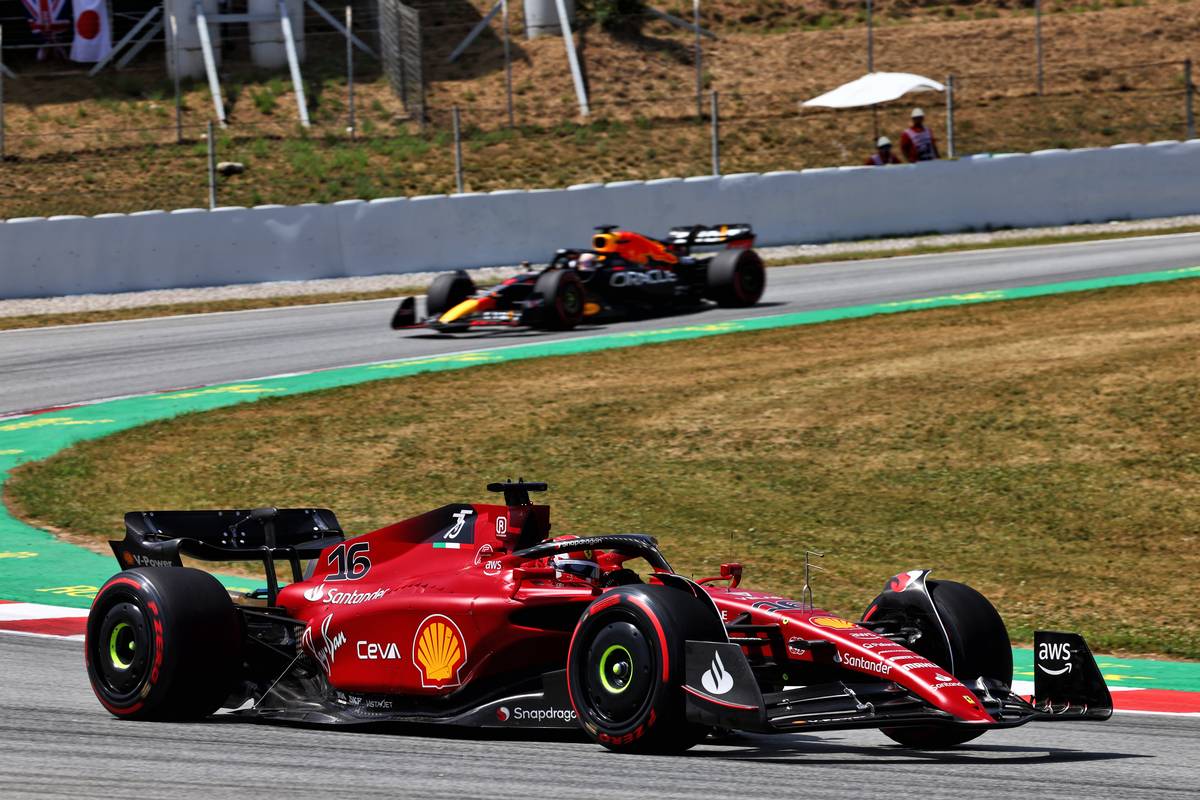 Leclerc looked to have a clear run to his third win of the season, when suddenly everything changed on lap 27 when the Ferrari lost power. Russell and Perez swept past as Leclerc headed for pit lane where the team confirmed that the issue was terminal and his race was over. Red Bull responded immediately on lap 29 by pitting Verstappen for new softs which he quickly put to good use by sweeping past Bottas in turn 12 to climb back to third. That cleared the way for Perez to use his fully-functioning DRS to charge his way past Russell in turn 1 on lap 31 to claim the lead.

Russell was struggling for grip by the time he finally made another stop on lap 37, with Perez also taking the opportunity to take new tyres next time round, the one-stopper proving beyond even F1's premier 'tyre-whisperer'. That promoted Verstappen to the front again, but with a third stop still to come. Drivers further back were also making their scheduled second stops with only Magnussen trying out the hard compound, with little to lose having fallen to the back after his first lap clash with Hamilton. In addition, Pierre Gasly had been handed a five second penalty for colliding with Aston Martin's Lance Stroll on lap 29, and Zhou Guanyu was out of the running after his Alfa Romeo suffered a technical failure on lap 28.

With 25 laps still to go, Verstappen had extended a 17s lead over Perez and Russell, with Bottas in fourth from Sainz and Hamilton now back up to sixth ahead of Ocon, Norris, Vettel and Alonso. Verstappen briefly surrendered the top spot on lap 45 to make his final pit stop, coming back out five seconds behind Perez but crucially just ahead of Russell. A little team trading saw Verstappen swiftly resume control of the race with a "Thank you, mate" to Perez, from where he was able to cruise his way to the finish and put all that earlier DRS-related drama behind him. 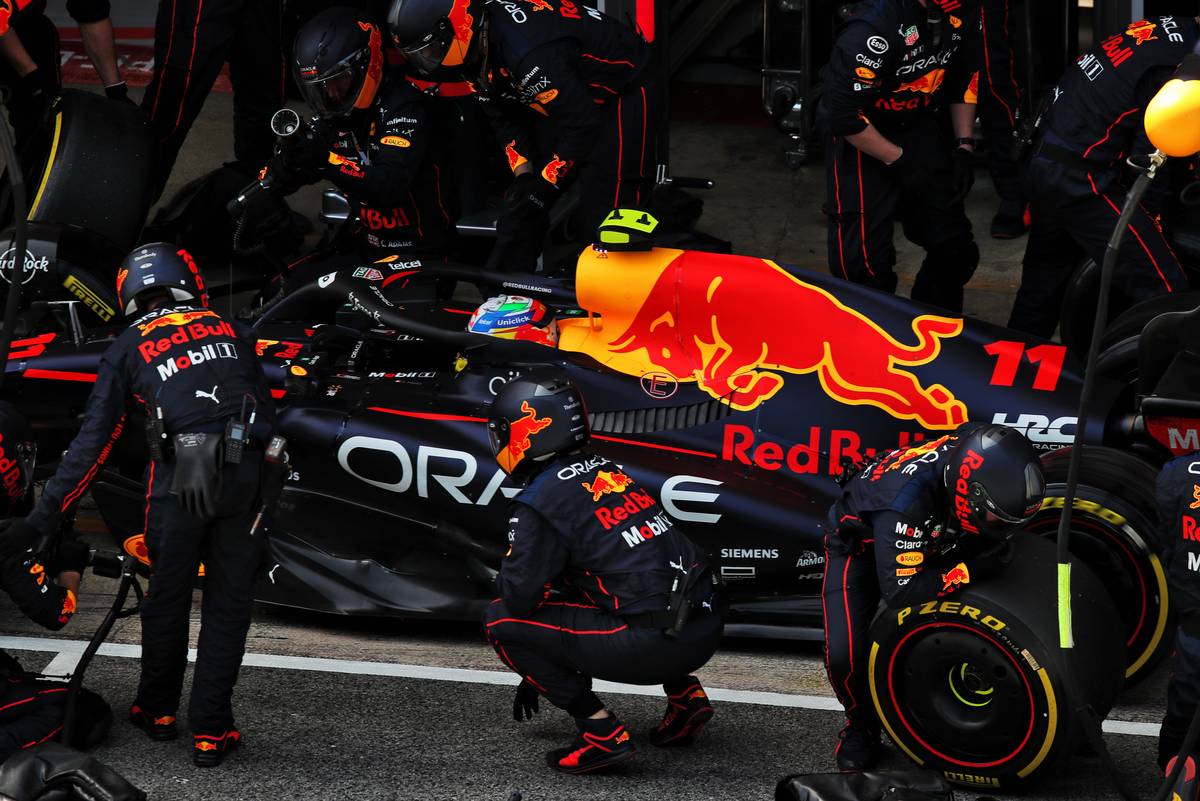 Although not particularly enthusiastic about the situation, Perez dutifully settled into second and protected his team leader from any designs that Russell might have on crashing the Red Bull party. Instead, Russell set his sights on depriving Verstappen of the bonus point for fastest lap by pitting again, this time for soft tyres, even at the cost of briefly dropping behind Bottas. Others were playing the same game, with Hamilton currently holding the bonus point and Sainz also in pursuit, and Perez likewise pitting for softs on lap 54 while retaining second. Other cars were also making a third stop, but more out of necessity rather than in hopes of setting the fastest lap.

When the game of musical tyres had finally played out, Verstappen and Perez claimed the top two spots with Perez also setting the fastest lap, in what could be a pivotal moment in the 2022 championship, while Russell took an accomplished third. Hamilton had been able to sweep past Sainz and Bottas only to be told to lift and coast in the final two laps due to the risk of a DNF from a water leak; Sainz received a similar warning but still had just enough in hand to reclaim fourth for Ferrari while Hamilton was left to focus on defending fifth from Bottas.

Alpine's Esteban Ocon took seventh ahead of Lando Norris, with Fernando Alonso and Yuki Tsunoda rounding out the top ten. Missing out on points were Vettel, Ricciardo, Gasly, Schumacher and Stroll and Magnussen in 17th sandwiched between the two Williams of Nicholas Latifi and Alex Albon, Zhou Guanyu and Charles Leclerc both having retired mid-race.

The result means that Verstappen now leads the drivers championship with 110 points, six ahead of Leclerc. In the team standings, Red Bull go top with 195 points after taking a maximum haul in Spain, putting them 26 points ahead of Ferrari.