There was almost nothing between Charles Leclerc and Carlos Sainz at the top of the timesheets for second practice in Monaco on Friday, the two Ferraris split by just 0.044s putting them almost four tenths quicker than the rest.

Red Bull's Sergio Perez and Max Verstappen were the closest of their rivals, with Lando Norris fifth fastest for McLaren ahead of Mercedes' George Russell who had then gone on to brush the wall at turn 12.

Daniel Ricciardo failed to set a time after triggering the sole red flag stoppage as a result of the McLaren understeering at Tabac and ending up in the barriers.

In the opening sun-baked session of the weekend, Ferrari driver Charles Leclerc had extended his reign of practice-topping times from last week's Spanish GP to add another notch to his belt in Monaco FP1 by just 0.039s from Red Bull's Sergio Perez. Their respective team mates Carlos Sainz and Max Verstappen had been close behind, followed by Lando Norris as the McLaren driver completed his recovery from tonsillitis. However it had been a weak start for Mercedes, who might have thought they had finally addressed its chronic porpoising issues in Spain but who come off worse for wear on the Monaco bumpy street circuit.

When the track reopened for the second one-hour session of the day, Verstappen was first to get back to work on a brand new set of mediums to make up for the time he squandered after locking up in FP1 and flatspotting his tyres. The Ferrari drivers meanwhile were the only pair to shift onto the hard compound, with the intention being to focus initially on longer distance race simulations. 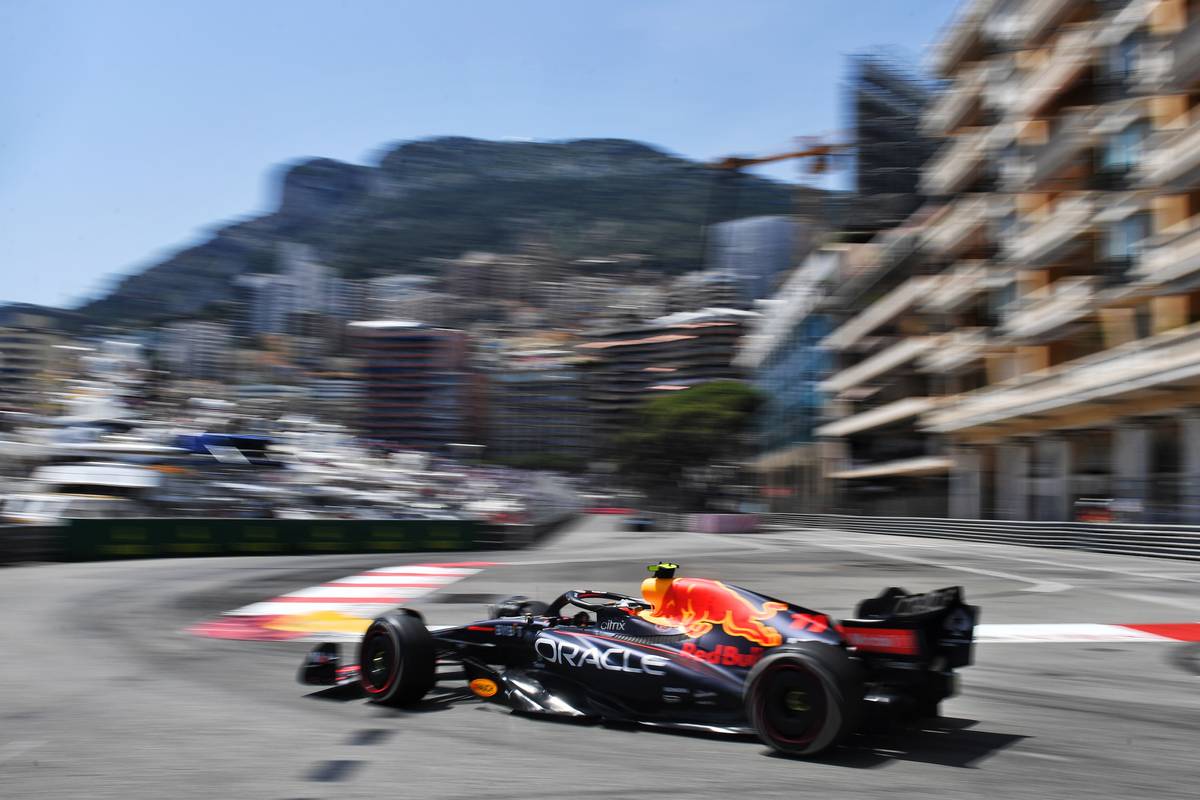 It was Perez who set the early target of 1:16.176s, just a couple of tenths quicker than Lewis Hamilton, but it wasn't long before Leclerc had trimmed the time back to 1:15.762s. Verstappen then took a further 0.055s off to go top with Norris settling into second ahead of an improved time from Hamilton pushing Leclerc temporarily back to third before Sainz then pushed to the top. Meanwhile there had an early lock-up for Yuki Tsunoda, but the Japanese driver just managed to keep the AlphaTauri out of the wall at turn 1 despite reporting really bad vibrations in the cockpit.

Perez' next effort was eight tenths quicker than Sainz. His time of 1:14.001s was more than good enough to keep a flying Verstappen at arms length in second by a quarter of a second, with Leclerc also improving to move up to third ahead of Sainz, Norris, George Russell and Lewis Hamilton ahead of Pierre Gasly who had locked up at the Nouvelle Chicane on this next run. However the Frenchman was soon back up to speed and able to push on to fourth as times continued to tumble and positions switched back and forth with every lap.

Sebastian Vettel had just escaped a major incident in which the Aston Martin took too much kerb and lost the rear, ending up very lucky not to plant it in the barrier as a result. But the luck then ran out for Daniel Ricciardo: on his first flying lap, the McLaren oversteered into the swimming pool complex at Turn 13 and thudded into the TechPro at the swimming pool complex, scattering large bits of bodywork across the track. It triggered an immediate red flag to allow the track workers to clean up the mess, with Ricciardo quick to report over the team radio that he was unhurt. "I'll explain when I get back," he added. 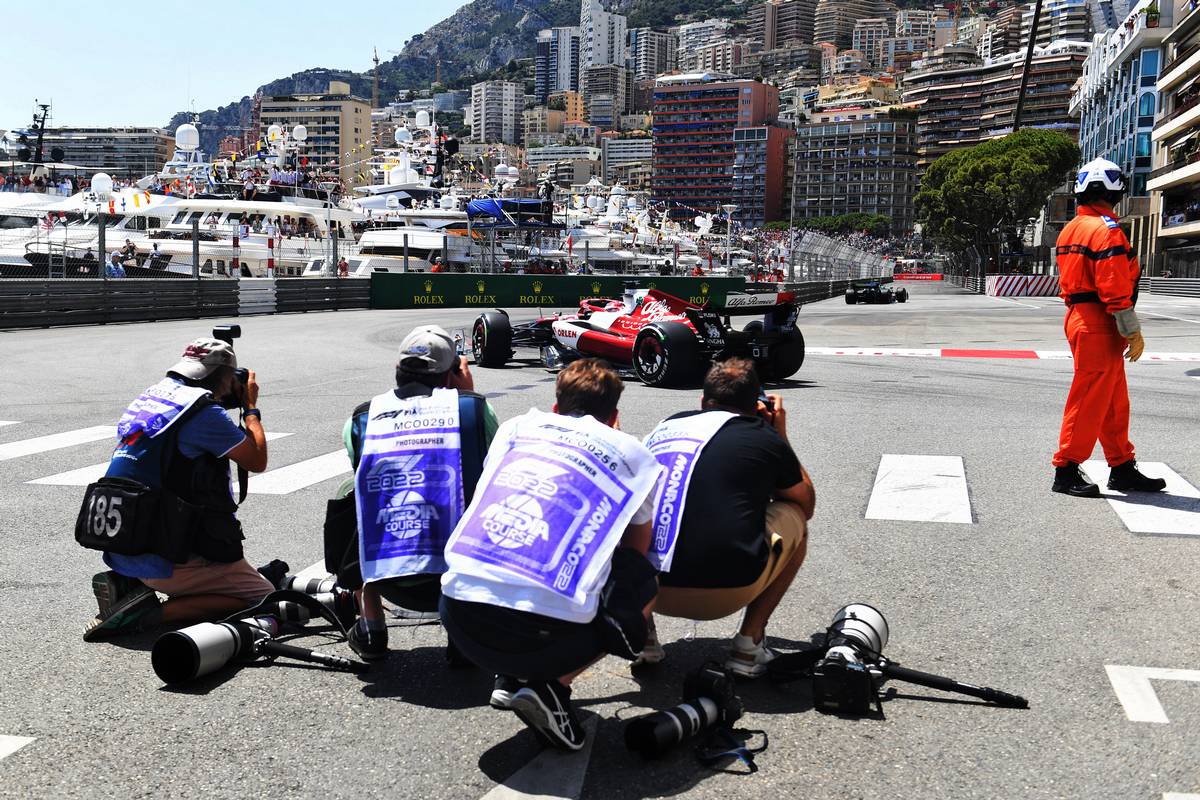 It also hadn't proved a great start to the afternoon for Alfa Romeo. Valtteri Bottas had been forced to take a new MGU-K unit after FP1, and his team mate Zhou Guanyu was likewise stuck in pit lane and played no part in the session before the red flag stoppage. Mick Schumacher was another to be sporting a new MGU-K after his own FP1 stoppage, which had then damaged the gearbox of the Haas VF-22, but at least it was patched in time to get him back out in second practice.

When the session resumed after Ricciardo's accident, soft tyres and qualifying runs were the order of the day. Alpine's Fernando Alonso briefly went to the top but Perez then went half a second quicker with a time of 1:13.324s that was enough to keep him three hundredths ahead of Verstappen. A promising purple first sector for Hamilton unfortunately petered out toward the end, leaving Russell to jump into third place in his team mate's stead. Then it was the Ferrari drivers turn to see what they could do: Leclerc duly laid down the gauntlet with a time of 1:13.125s, two tenths better than Perez, but Sainz was struggling to get in a clean lap and continued to languish down in eighth, for now still over a second off his team mate.

After a brief breather, Verstappen went top with a time of 1:13.103s only to be immediately deposed of again by Leclerc, with then Sainz popping into second after finally getting a clear run. Leclerc pressed on to set a new benchmark of 1:12.656s, while there was a strong effort from Norris to put the McLaren into fourth ahead of Perez, Russell and Alonso. By now Vettel was up to eighth after his earlier lucky escape, putting him ahead of Kevin Magnussen and Lewis Hamilton. 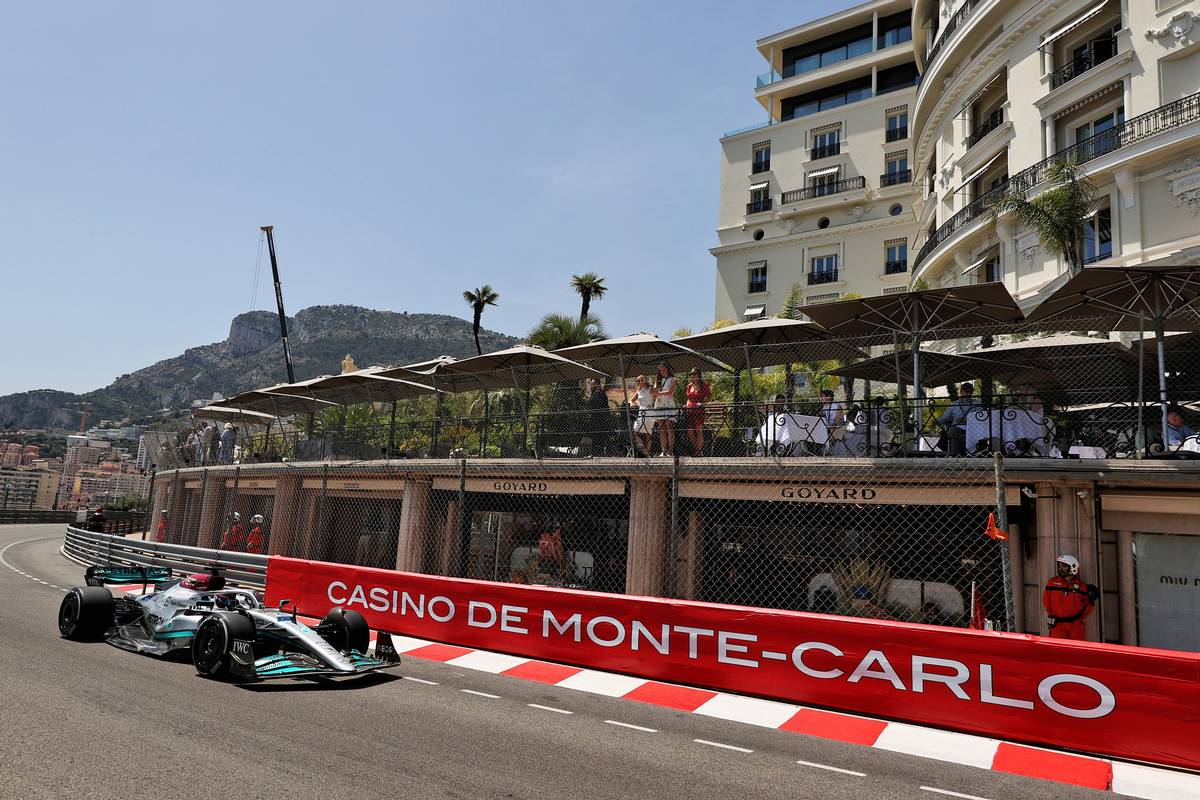 Perez then pushed on to split the Ferraris in second, with Gasly back up to seventh as Hamilton's latest run saw him wide at Mirabeau. Verstappen also had a lairy moment at Anthony Noges, but neither had sustained any lasting harm to their session in the process. Russell then brushed the wall at Tabac and briefly came to a stop, only to be subject to a recall to the Mercedes pit for checks on the lightly bruised W13. Norris was also seen heading for home after saving a tankslapper, but was soon back underway again.

By the time the teams ended their qualifying stints and started to move back to medium and hard tyres for longer runs, Leclerc was firmly back in charge of the times with Sainz confidently up to second ahead of Perez and Verstappen. They were followed on the timing screens by Norris and Russell, with Gasly seventh despite being frustrated in traffic. Alonso, Vettel and Tsunoda rounded out the top ten while Hamilton was just 12th quickest when the chequered flag came out.