Lewis Hamilton will be left chasing from behind on Sunday at Monza, with the Mercedes driver starting his Italian Grand Prix from the back of the grid due to an engine change.

Hamilton's power unit at Spa suffered damage in the Briton's first lap contact with Fernando Alonso that forced Mercedes to rely on an older unit last weekend at Zandvoort.

But the mileage on the latter has put the engine beyond its lease of life, while Mercedes' engineers at Brixworth are still assessing which components from Hamilton's Spa unit can eventually be salvaged.

The Brackley has therefore been compelled to add a fresh engine to Hamilton's pool of hardware for this weekend's round of racing at Monza.

As the change surpasses the limit of three engines per season, it will therefore trigger a back-of-the-grid penalty for the seven-time world champion.

Leclerc prepping for a difficult weekend 'on paper' for Ferrari 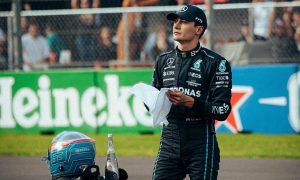