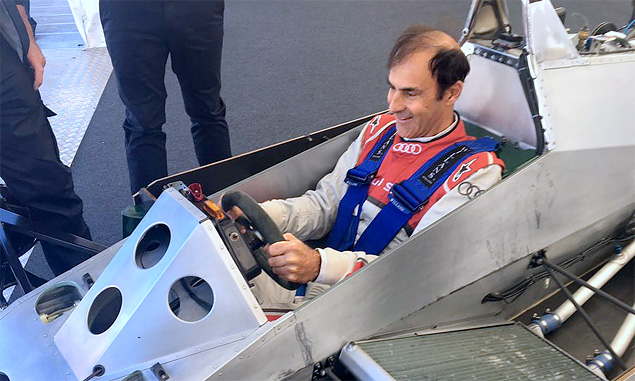 Goodwood's Festival of Speed is basically Disneyland for any grown-ups who love motorsports. And that includes past, current and even future stars of Formula 1!

Here's former F1 driver (and five time Le Mans 24-hour winner) Emanuele Pirro visiting Williams on Sunday morning as part of the team's 40th anniversary celebrations. He's pictured here trying out the FW08B for size. That's the six-wheeled car which added extra wheels at the rear of the car to improve traction. It never raced, as it was banned before it ever had the chance to take to the track.

"Someone in a FOCA meeting said it would drive up costs and cause chaos during pit stops," said Williams technical boss Patrick Head at the time. Thereafter the FIA limited the number of wheels for all cars to four, of which only two may be driven.

As for Pirro, the Italian took part in 37 Grand Prix races between 1989 and 1991, starting his career with Benetton before moving on to Scuderia Italia. His best result was fifth place in the Australian Grand Prix at the end of 1989. His team mate and compatriot Alessandro Nannini was second that day, with Thierry Boutsen taking the win for Williams