In the minutes following its appearance, F1's new identity was trashed, belittled and picked apart on the internet by F1's diehard traditionalists, critics and trolls.

The logo was created by London agency Wieden+Kennedy which created a few mock-up photos displaying the new symbol in its natural habitat along with a possible example of F1's new typeface (Singapore).

Looking at it here, we think this logo works as a symbol which embodies the speed and thrill of Grand Prix racing.

What do you think? 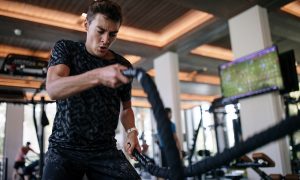