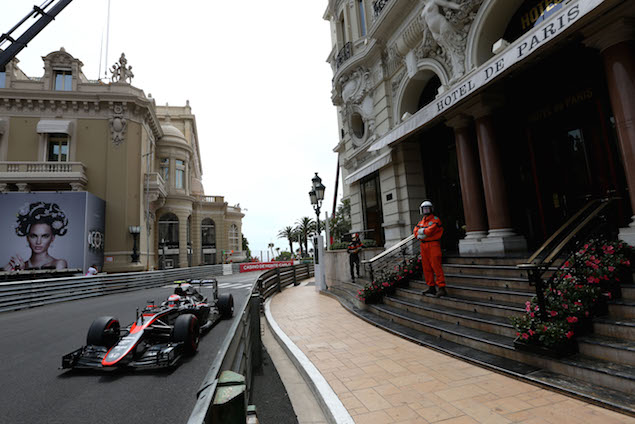 Jenson Button: There’s always a bit of ‘shoulda woulda coulda’ in qualifying, but I would have easily been inside the top 10 today.

On my final lap in Q2, I lost a lot of time lifting for the yellow flag at Turn One. I then gained a lot of it back – I was only a tenth off my best – but it wasn’t enough. And I think we could have had some fun in Q3, too – I think we’d have been fighting two or three cars for position.

The car felt really good – although we still don’t have enough outright pace – but I have a lot of confidence in it, especially under braking. Today’s performance shows the progress we’re making. The team has done a fantastic job this weekend, and they should be happy because the car is getting better all the time.

This is a nice little stepping stone for the future. Our aim tomorrow will be to score points.

Fernando Alonso: We don’t exactly know what happened to my car in Q2: I guess it was something electrical because the car switched itself off in the middle of the straight. I had no power, no electrics, and no readout on the steering wheel.

But, overall, the team’s performance has been better this weekend, and Jenson at least has the opportunity to score a few points tomorrow.

I don’t wish to sound pessimistic, but, in the Monaco Grand Prix, the race finishes on Saturday afternoon. On Sunday, you just join a train of cars. Starting 14th, hopefully we can gain some experience of the car, and improve its performance and reliability. We’re still too fragile at the moment.

Eric Boullier, Racing Director: Today's qualifying session was not only disappointing, but also unlucky. Fernando had been quick and confident in every session, and we were therefore fully expecting him to move smoothly through to Q3 this afternoon. Unfortunately, however, his bid for Q3 glory was ended by an as-yet-unspecified failure at Sainte Devote, where his car came to an abrupt stop. We're still investigating the cause of the problem.

As for Jenson, he was also lapping fast and well, and would definitely have made it through to Q3 also. However, as luck would have it, just as he was about to cut his quickest lap in Q2, ahead of him Nico [Rosberg] locked up and went straight on into the Sainte Devote escape road, triggering a yellow-flag deployment, requiring Jenson to lift off as he passed the hazard. Had he been able to take Sainte Devote at normal speed, he'd have ended Q2 well inside the top 10, allowing him to go through to Q3 for the first time this season.

So, as my British colleagues would phrase it, I guess there's no point crying over spilt milk, but we're undeniably frustrated nonetheless. Having said that, Jenson and Fernando are both massively experienced world champions, so tomorrow you can be well sure that they'll be pulling out all the stops in their efforts to battle their way through the field to points-scoring positions by flag-fall.

Overtaking is always incredibly difficult here, of course, but our guys will be doing their damnedest to make good progress, even so.

Yasuhisa Arai, Honda R&D senior managing officer: We are extremely disappointed with the qualifying results as we had a very good feeling within the team during FP3 earlier today. I believe that Jenson's qualifying lap may have been affected by the sudden yellow flag as he was starting his flying lap.

We are currently investigating Fernando's car issues, though we suspect it to be electrical. The drivers have a positive impression towards the car, so tomorrow we will adapt the power unit set-up and hope to gain some positions during the race. As for qualifying, we aim to improve the low- to mid-speed driveability further to match the circuit. Time is of the essence, so we’ll do our best.

Alain Prost Q&A: 'F1 just shot itself in the foot!'