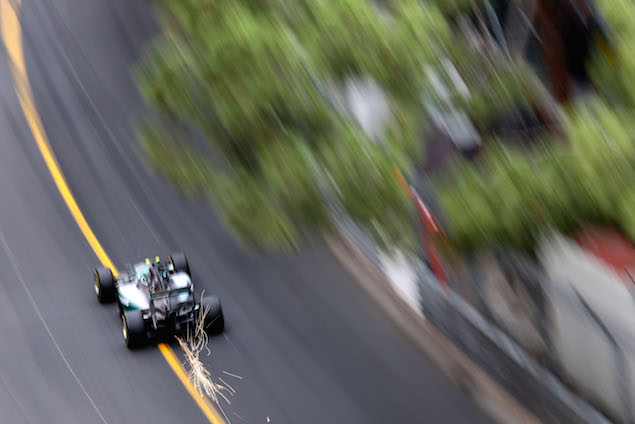 Nico Rosberg: I found a good way into qualifying today, had a good Q2, but then I lost the good rhythm at the end, which is a shame. I had to push a lot so I went a bit over the limit. Lewis did a good job today, unfortunately now it's getting really difficult to win this race. But I will dream tonight of my Barcelona start and hope to have another one tomorrow.

Lewis Hamilton: My first Monaco pole position; it's felt a long time coming! Today, bringing the tyres in was tricky. We had to do an out-lap, warm up lap then fast lap. We had to do that for both tyres. It's an important day for me, looking back through every year at Monaco generally it's been quite poor. Sometimes I've had the car, sometimes I haven't. I've lived here for the last few years so it makes this pole position even more special. There's still a long way to go, it's only half the job. It's going to be mentally and physically challenging tomorrow but I'm looking forward to it. A big thank you to the team; the performance we have in the car is outstanding and they've been working very hard. I think the last pole position for me here was in GP2 in 2006 so I hope I can take advantage of it tomorrow in the race.

Toto Wolff, Head of Mercedes-Benz Motorsport: Congratulations to both drivers because we have done the first half of the job now, with our cars on the front row in Monaco. It looked like Nico had the edge during Q1 and Q2, then Lewis found another gear in Q3 and nailed the lap when it mattered. To set a lap of 1:15.0 around this circuit is pretty incredible, especially when you consider that this is just 1.5 seconds away from the all-time best here in Monaco. With Nico, he locked up into Turn 1 on his final lap, which meant he couldn't improve his time - but it was still good enough for the front row. Obviously, from pole position and the front row we can control the race if we make strong starts. But we will need to be on our toes and to extract everything from the car tomorrow, because our rivals are close - and will be pushing us hard tomorrow.

Paddy Lowe, Executive Director (Technical): A front row at Monaco is never easy and this is always the most tense qualifying session of the year because so many things can go wrong. Coming out of third practice this morning, Sebastian looked very quick and we were expecting a very close contest between our drivers and him in qualifying. As it happened, perhaps because of the cooler conditions, we found we had a good margin of performance over Ferrari but it was, of course, very close between Nico and Lewis. They were separated by just over 0.1s on their first run in Q3, then Nico locked up into the first corner on his second lap, leaving Lewis with a safe pole. Nevertheless, we let him complete the lap and he improved with a stunning time of 1:15.0 to claim his first pole position in Monaco. Well done to the drivers for getting this far with the cars intact and to the team for a fantastic job so far this weekend and a great car.

Alain Prost Q&A: 'F1 just shot itself in the foot!'