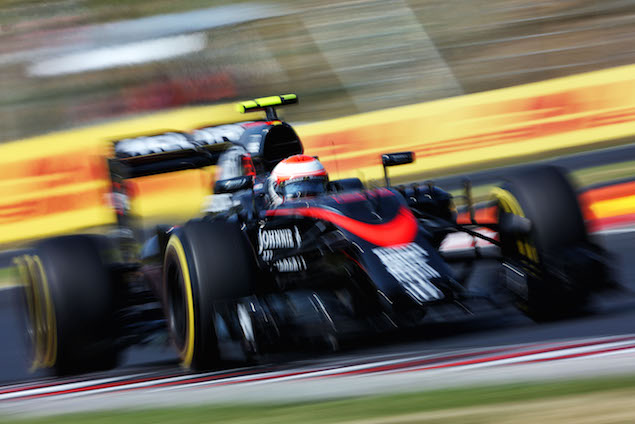 Fernando Alonso: “We see on Fridays that some teams don’t show their full potential, and are more competitive on Saturday. Neither Force India ran this afternoon, so I think it’s realistic to expect that there’ll be a few more cars ahead of us tomorrow. Nevertheless, I’m pretty happy with the performance of the car – it gets better every weekend.

“It’s been a trouble-free day – we had no issues on either car – but now we need to focus mainly on the race. Our long-run pace looks okay, but qualifying will be important too because overtaking around here is so difficult.

“I’d like to hope that, if we finish the race, we can hopefully score some points.”

Jenson Button: “I enjoyed the car today – it was fun to drive – and the last time if felt like this was in Monaco, so that’s a promising way to start the grand prix weekend. Hopefully, we can have a reasonable time here – it’s tough with these high temperatures, but every team has to deal with that.

“Our high-fuel runs were reasonably positive today, so I think we’ve got a good foundation beneath us. The balance is giving me confidence: we know we can make it faster too, so, with a few little set-up tweaks, I think we could be in reasonable shape tomorrow.

“Overall, I think the team is in a good place – we’ve had a tough few races recently, but we’ve stuck together, and we’ve stayed strong.”

Eric Boullier, Racing director: “Today’s practice sessions were far from the jejune affairs we’ve seen recently; the drivers and engineers had to contend with a number of red flag stoppages, which, coming so close to the end of each session, had quite an impact on our scheduled run programmes today.

“Nonetheless, we made progress throughout the day, and it stoutens the spirit to end a practice session hearing both drivers proclaim that their cars are well balanced and inspire confidence. Of course, it’s still too early to get an accurate read on our performance relative to that of our rivals – not least because neither Force India driver set representative times this afternoon – but we’ve made a positive start to our weekend, and we’ll be looking to capitalise on that on both Saturday and Sunday.”

Yasuhisa Arai, Honda motorsport boss: “By running both FP1 and FP2 sessions smoothly, we were able to establish a precise energy management strategy suited to the track. In fact, our pre-race data simulation had been right on track.

“During FP1, the temperature and conditions were similar to Sunday’s forecast for the race, so we used the session to work on power unit set-up. FP2 in the afternoon was held under intense heat, but the ERS settings were not at all affected by the temperatures, so we were able to do a qualifying simulation.