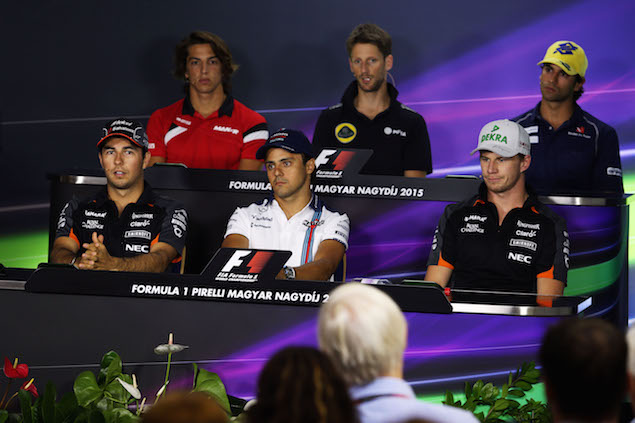 The Question: Felipe, coming to you, congratulations on your contract extension announced today. Why was staying at Sauber the right thing for you?

FN: Well, I think it only builds up the trust between myself and the team. Although I think it was always the plan when we came to Sauber, for the first time the opportunity came and I thought it was the right moment to take it. It’s nice to see the team, they put in a lot of confidence on myself and I think, looking back at the year we’ve had already, in this seven months we’ve learned a lot together, we did achieve a lot, I think we did achieve most of what we’ve expected, especially in the beginning of the year when we had some great results. As mentioned, the Australia fifth place was fantastic and, after that, we saw things becoming a lot more difficult and from the drivers’ point of view it’s always easier for us to say where the car needs to work and the team is seeing all the limitations that we have at the moment. I think everybody is leaning towards the direction of improving things out there. We saw Mark Smith coming in, joining the team. It’s already the beginning of that. And by having the two drivers, the same line-up, I think it only brings more of this information together, and we can be committed together for 2016 and build up something a lot more promising.

FN: It’s a good question and one I have asked myself a number of times in recent weeks. In fact, it usually came with a related question, which ran along the lines of: “Exactly what does $18m buy you in this day and age?” In answering this question, I looked at a number of things. First, I considered buying a private island and populating it with my own private army to do my every bidding. Then I thought about buying into one of those schemes to be the first man on Mars. I even considered the option of conducting research into robotics so that I could build android versions of myself into which I could transfer my own consciousness and thus cheat death. However, in the end I thought those things were a bit too pedestrian and obvious and I wanted to invest in an altogether trickier goal, like winning a grand prix with Sauber. So here I am.