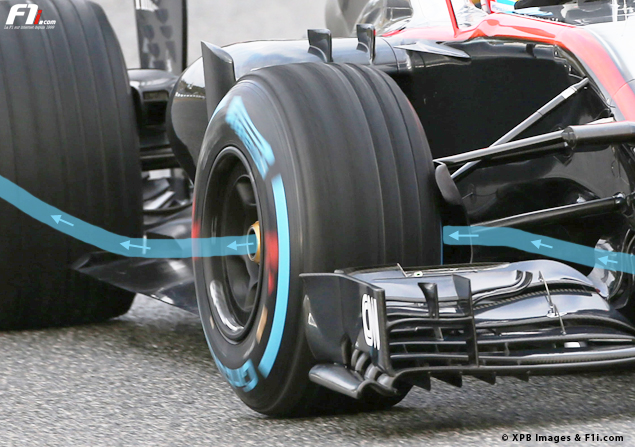 The first 2015 pre-season test in Jerez saw several Formula One cars feature blown front wheel hubs. This is worth mentioning as these, while usually hollow, are commonly closed off around the wheel nuts with pointed ends to speed up the engagement of wheel guns at pit stops.

Red Bull, Ferrari, and McLaren have however decided to keep their cars’ front axles open in order to vent air passing through oversized brake ducts. The concept first appeared in 2013 on the Mike Couglan designed Williams FW35 while Red Bull also used a similar system. Both teams dropped the innovation however in 2014 because the FIA introduced tighter wheel-nut regulations to include a fail-safe should a wheel not be secured properly. At the time, this rendered Red Bull and Williams solutions unusable without major redesigns.

How does the system work ? The oversized brake duct captures the airflow and splits it into two streams. Part of the air helps cool the carbon disk, while the remainder feeds a channel running through the spinning axle and exits out of the centre of the hollow wheel-nut. As a consequence, the stream creates a low-pressure zone which pushes the wake coming off the twisted front-wing endplates further outward. This in turn reduces drag and channels the airflow towards the sidepods and crucially, towards the diffuser. Last year’s technical regulations led to narrower front wings, which meant the airflow started to decrease in intensity. This is why, in order to make up for lost ground and have the endplates less curved, aerodynamicists re-introduced the open front wheel hub design. 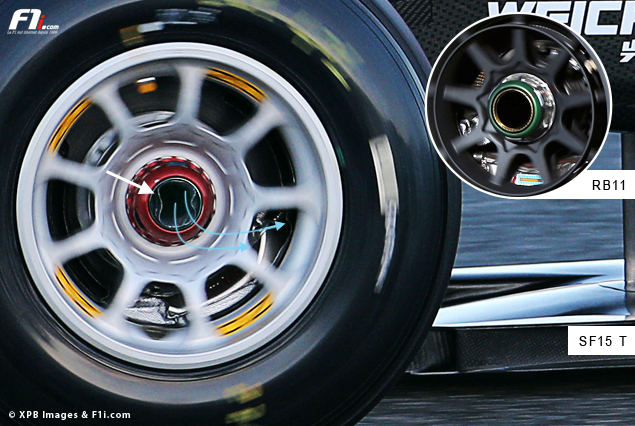 If the blown front axle solution is to work properly, it theoretically needs brake ducts and wheel rims specifically built for that purpose. While Ferrari and Red Bull came up with a conventional oversized design, the MP4-30’s brake ducts are extremely sophisticated and only feature a small inlet. This indicates that McLaren has also tried to retain the benefits of closed off front axles (like on the Mercedes).

What’s more, Woking's latest challenger seems to incorporate the most original and complex wheel rim design of the entire field. Its action is twofold: interact with the airflow exiting from the wheel hubs in order to control the wheels’ dirty wake, and store as much heat as possible to keep the tyres at optimal working temperature.

This is why McLaren’s regular wheel supplier Enkei created a specific rim that features five main spokes and a multitude of small indentures on the outside (energy recovery has indeed made front brake cooling even more crucial). Moreover, the rim does not have a smooth inner surface but is coated instead with hundreds of tiny trapezoidal motifs (Mercedes introduced the concept back in 2013). 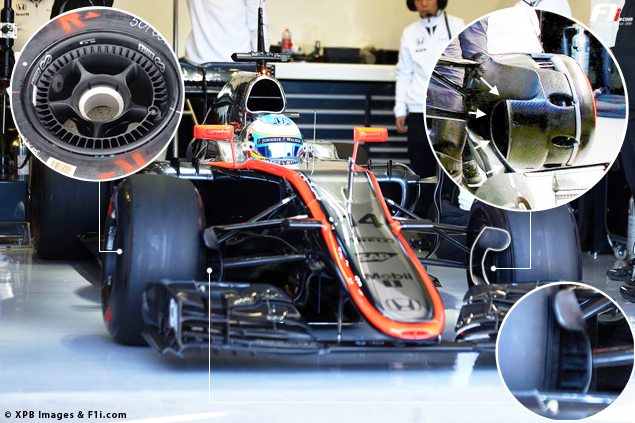 While three major teams have decided to go down the blown front wheel hub development path to design their 2015 machines, all the others – Mercedes, Williams, Lotus, Toro Rosso, and Sauber – elected to keep closed off front axles. Since the new VJM08 has yet to make its official track debut, it remains to be seen which option Force India has favoured.

One remembers that Williams experienced recurring pit stop issues in 2013, a year when their chassis featured hollow wheel hubs and open-ended wheel-nuts... Team designers undoubtedly reflected on the system’s pros and cons and reached the conclusion that the advantage/drawback ratio was not worth the gamble.

This is why, for instance, the Silver Arrows’ brake ducts have an almost flat surface that does not feature any inlet (as shown below). If the concept is not new – other teams have already used plane deflectors to feed air to the front brakes – it is back at Mercedes after a one-year hiatus. A smooth surface significantly helps the deflectors improve how the air flows around the wheel. Once again, every design has its strengths and weaknesses. Ultimately, it’s all about finding the right balance within a wider, global concept.

This should provide abundant food for thought to F1 engineers that are always hungry for the latest winning developments. 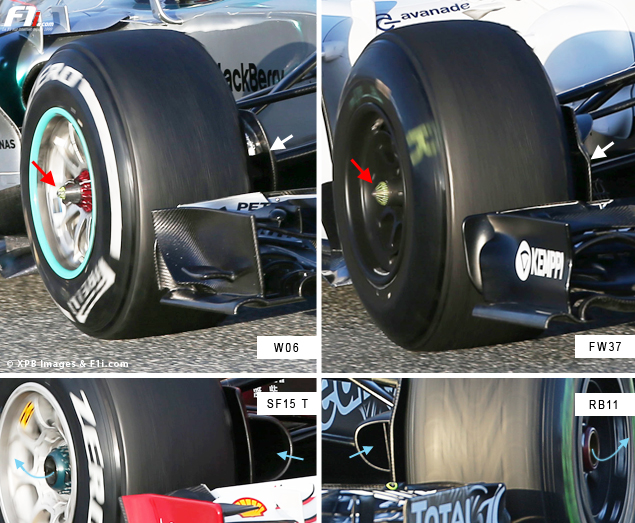 Racing with your hero

F1 testing: The tip of the iceberg