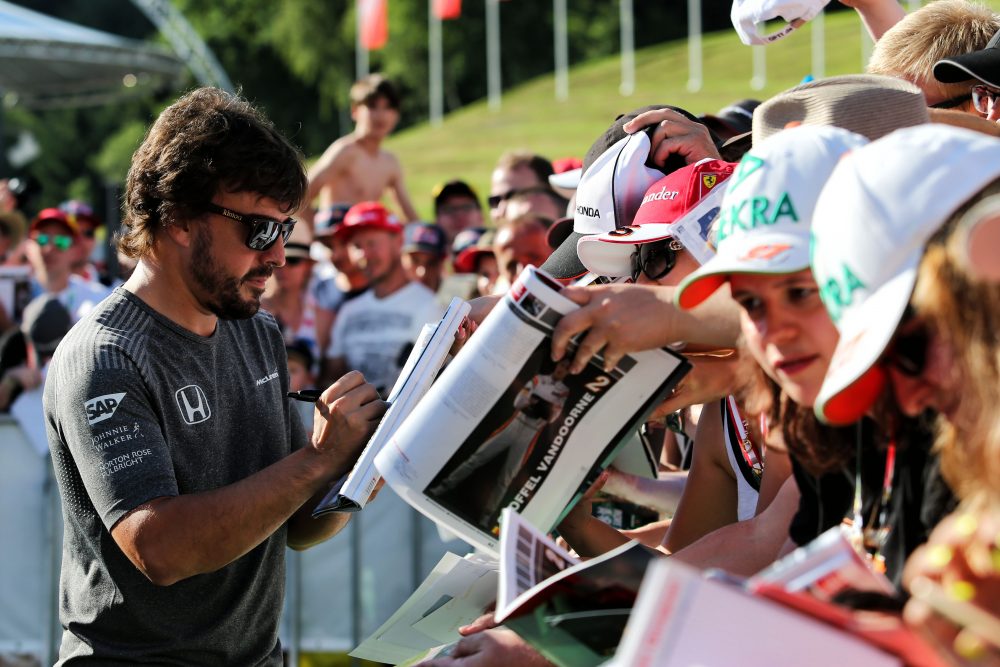 Fernando Alonso
"Tough times. A difficult weekend for us, starting last with the penalties, then in the race, when I was following a group of cars, I had another issue.

"Hopefully, it hasn't done any damage to the engine and we'll be able to keep using it in the future.

"Stoffel was 11th today, so I think we weren't quick enough to be in the points today and I think I could have ended up 13th, 14th, and the retirement is a little bit less painful.

"Now I am looking ahead to Hungary, which should be a better weekend for us."

Stoffel Vandoorne
"It's a shame to once again finish just outside the points – but there are plenty of positives to take away from this weekend.

"The pace we showed in the race today was very encouraging: to run as close as we did to both Force Indias and a Williams on a circuit like this is a real positive.

"Not everything went perfectly in the race - my pitstop didn't go too smoothly, so I came out side by side with Felipe and lost a position. That was a shame, because there was definitely a chance to finish ahead of him because our pace was very similar to his.

"Unfortunately, no points – but today was very encouraging, and I'm sure our time will come."

Eric Boullier, racing director
"From the back of the grid Fernando made a strong start, carving his way through the backmarkers, and was holding a solid 14th place by one-third distance. Meanwhile Stoffel was holding a steady ninth place.

"It was therefore very disappointing when Fernando was forced to retire on lap 35, as a result of a drop in fuel pressure that led to a loss of power. We're still investigating the cause of that failure.

"With 10 laps to go, Stoffel was locked in a battle for 10th place with Felipe [Massa]. In the end his hopes of scoring a world championship point were to come to naught, but his was a solid and impressive drive nonetheless.

"From here we go to the Hungaroring, over whose many twists and turns, linked as they are by short straights, we hope to be a little more competitive."

Yusuke Hasegawa, Honda R&D head of F1 project
"This weekend ended on a frustrating note as Stoffel just missed out on a championship point at our home race. Up until today, things had been looking up and we had been showing some encouraging pace.

"Stoffel started his race from a good position and he showed competitive pace in the midfield throughout the race. He pushed as hard as possible so therefore it was disappointing he finished 11th just outside of the points.

"Although Fernando had to start from back of the grid, he improved his position during the first part of the race, and was close to Stoffel. Sadly, he had a fuel system-related issue and had to retire from the race. We are now investigating the cause.

"Having said this, I still think we leave Silverstone with some positivity. We had improved pace and our competiveness has also improved over the last few races. Next up is Hungary which is a track that suits our package better, so I hope we can have a good race. We will continue our best efforts towards scoring some points at the next round."