F1i technical expert Nicolas Carpentiers provides you with images and explanations of the upgrades on display at the Russian Grand Prix.

The title-winning W06 Hybrid featured an interesting-looking detail on its front wing at Sochi. Indeed Mercedes added serrated edges to the top section of the penultimate flaps. This was not a first though, as the newly crowned champions had already done so at the Japanese Grand Prix two weeks earlier.

The empty space between the flaps helps maintain the airflow attached to the inner side of the front wing. One possibility to avoid airflow separation – this can happen when the front wing’s angle of attack is too abrupt – is for teams to widen such gap, though this also reduces downforce. Another solution is adding the sawtooth element pictured. At the top of each spike, small vortices are generated, which in turn re-energise and thus accelerate the airflow. The goal is to increase the front wing’s exploitation window and improve the overall aerodynamic balance of the car.

McLaren had actually applied the same principle on the rear wing of its MP4-29 last year, but eventually elected to drop the concept for 2015. 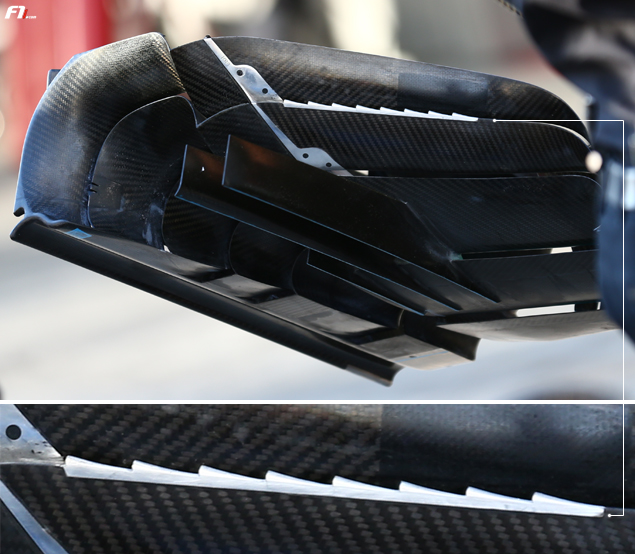