Catch up with what the teams had to say following the second race of the 2018 season, the Bahrain Grand Prix at the Bahrain International Circuit, Sakhir. 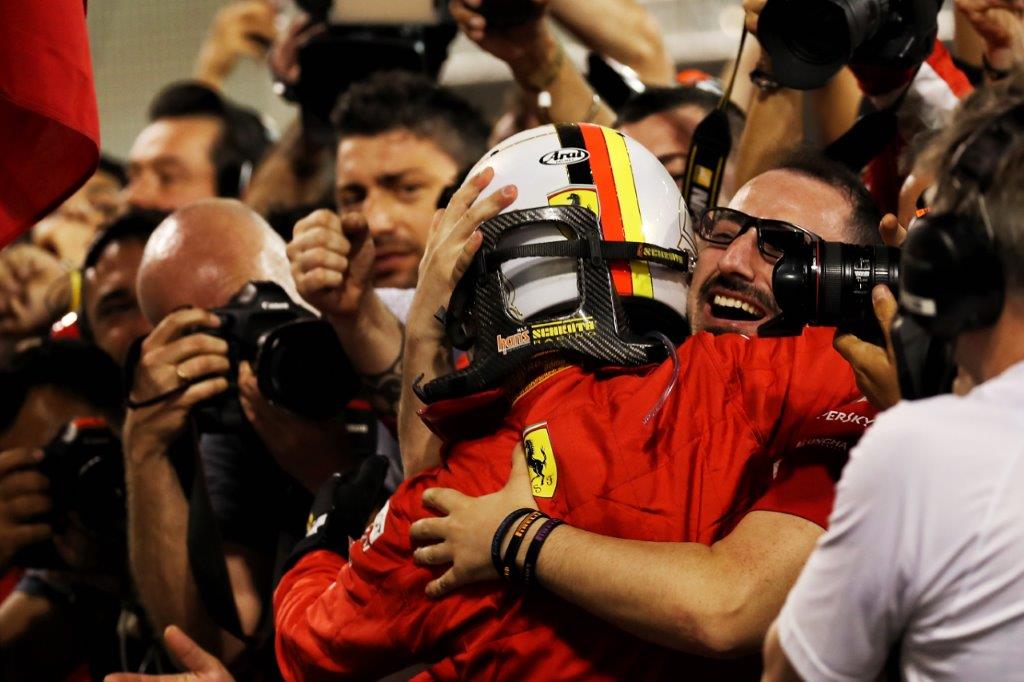 Sebastian Vettel
"Obviously, this is a great way to start the season and it wasn’t expected. Obviously Australia was a different race and if you compare these two races, here we had the pace and won on our own. So, I think it’s been much better, but it was a very tough race. It took a while for the adrenaline to go, but for the next week we are not sure where we are going to be. It is difficult to predict with everything changing so much. In China it will be a different track and a different challenge, but we have to improve our car and work on it. We still need to improve the balance. However, if we should have a similar feeling like here, then I think we should be in a good shape. We were losing a little bit at the end and Bottas was getting closer. We couldn’t wait and see what he was doing. So, in response to that we had to come in first to protect the track as much as I could. We had targeted two stops and that’s why we had chosen Soft tires. But then we had to change strategy; the tires were already wearing out, but then it seemed everything was ok. But after 10 or 12 laps, the tires got worse and the last five laps were very tricky. It feels better winning here than in Australia, because here we had the pace. So, I am very happy, even though it’s sad to see one of our guys getting injured. I wish him to get well soon, I know he’s in very good hands now."

Kimi Raikkonen
"What happened to our guy Francesco today at the pit-stop is very unfortunate. I feel sorry for him and hope he’s going to be OK soon. It’s always a bad thing when someone gets injured but I am sure he has the best people taking good care of him and I wish him a speedy recovery. As for the accident itself, all I know is that I moved when I saw the green light go on. I couldn’t have possibly realized that there was an issue with the rear left wheel, then I saw someone had got hurt and, immediately, I was told to stop by the team. Unfortunately something must have gone wrong and we’ll need to find out what. The car had good speed today but I had some wheelspin at the start. Anyway, there’s not much I can do now but wait for the next race, where we’ll try to do our best."

Maurizio Arrivabene, Team Principal
"Today’s result, with a win for Sebastian, is confirmation of the great job done by the team, of an effective car and of a driver who drove like a true champion right to the very end. It was a shame for Kimi, who would have completed a fine result for the team. We chose to take one of our mechanics up onto the podium as a mark of respect to our colleague Francesco who was injured during the pit stop. The whole team hopes he recovers quickly. We are already preparing for the next race in China and as usual we will give it our all."

Sergio Marchionne, Ferrari chairman
"First and foremost, I wish our mechanic a speedy recovery and hope to see him back on track soon. The team performed consistently all weekend and we were front runners right from the start of practice. It was a difficult race and Sebastian drove like a true champion. I am sorry for Kimi who could certainly have finished on the podium. This Grand Prix confirms that the Scuderia has a great car, a solid team and two drivers on top form. But it also showed how close things are between us and our rivals, who are very strong. That’s why, at the risk of repeating myself, it’s worth pointing out that there is still a long way to go and we have to maintain a high level of concentration, continuing to work diligently and with passion, which is something we are well capable of. It’s the only way we can give our fans other equally satisfying Sundays."

Tech F1i: Melbourne's back to school mods and new concepts