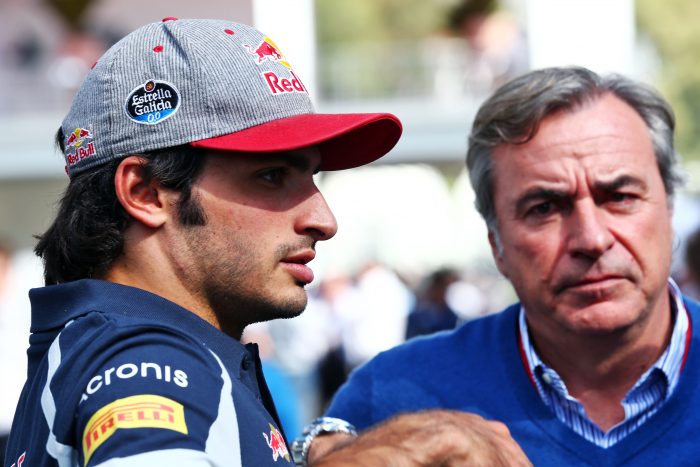 Baby steps: the path to Formula 1

Given his father's success in WRC, it was perhaps inevitable that the younger Sainz would find the lure of motor sports irresistible. Like so many future racing drivers he started his career behind the wheel racing in karting when he was aged seven - but it must have been very strange indeed to have been learning his craft at an indoor karting centre owned and run by his own father.

In 2009 he won both the Western European region of the KF3 series and the Monaco Kart Cup, a prestigious event that had previously been clinched by the likes of Sebastian Vettel and Robert Kubica. It was enough to attract the attention of one Dr Helmut Marko, who signed him up to the Red Bull young driver programme competing in the 2010 European Formula BMW series. He finished in fourth place, and then took a commanding victory at Macau in the sister Asian-Pacific series.

Sainz had arrived, and sure enough the call came from Marko offering him a full time race seat in F1

The following year saw him in Formula Renault 2.0, and then he beat fellow Red Bull protege Daniil Kvyat to win the Northern European Cup with a total of 12 wins and 26 podiums in 34 races. Red Bull promoted him into British and European Formula 3 in 2012, and while it wasn't the greatest of campaigns for him there was still a fabulous victory at a sodden Spa-Francorchamps to maintain his rising profile.

That potential blossomed in 2014 with a dominant sophomore run in the Formula Renault 3.5 World Series, in which he notched up a record-breaking seven wins en route to that year's title. Sainz had arrived, and sure enough the call came from Marko offering him a full time race seat with Red Bull's junior Toro Rosso F1 team for 2015.