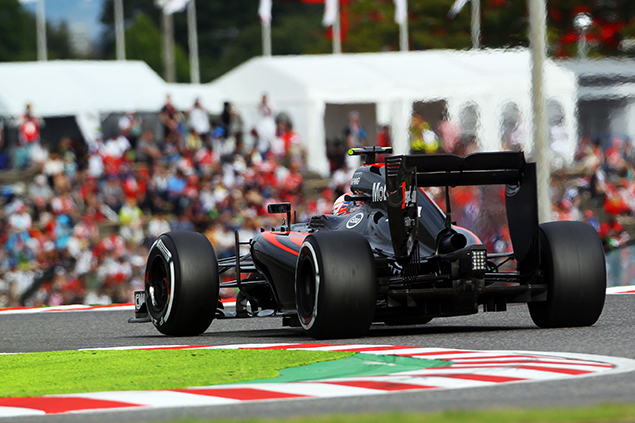 CARS WITH AN ATTITUDE

An F1 car generates around half of its total downforce from its underside by creating a pressure differential. By extracting the air travelling underneath the car, the diffuser accelerates the aerodynamic flow, which in turn creates a low-pressure area under the car. Basically, the bigger the diffuser, the more air it can extract, the more downforce it can generate. However, technical regulations restrict the diffuser’s height to 12.5cm, while it cannot be wider than 1m and longer than 35cm.

In order to increase the diffuser’s volume (read efficiency) aerodynamicists can artificially play with its gradient by tweaking the car’s attitude, namely by increasing the rear ride height. This is what Red Bull has been doing since 2011, with the front end lower than the rear, which gives the car a high ‘rake’ angle. Ever since blown diffusers were outlawed, all chargers produced in Milton Keynes have spawned from the same philosophy. However, the introduction of titanium skid plates underneath the car has forced Red Bull to raise the attitude of its challenger.

When raised, the diffuser becomes more exposed: turbulent airflow can enter the low-pressure area laterally, which hinders the diffuser’s efficiency. This is the reason why aerodynamicists generate a whole series of vortices to seal as much as possible the edges of the diffuser. As a reminder, teams can no longer exploit exhaust gases to create blown diffusers.

Former Sauber head of aerodynamics Willem Toet wrote on his blog that “the trend towards running ever higher rear ride heights in Formula 1 will be in part because the entire floor can become a diffuser, in part because the teams have learned how to use vorticity to take advantage of all that air that otherwise passes under the car almost ‘unused’.”

What’s more, teams must ensure that the splitter, which sits closer to the ground, does not get damaged, nor wear out too much. This year saw McLaren and Force India walk in Red Bull’s footsteps and run their cars at a high rake angle.