In part three of our regular series, Eric Silbermann visits the Force India factory at Silverstone to learn more about the role of a Sporting Director between seasons 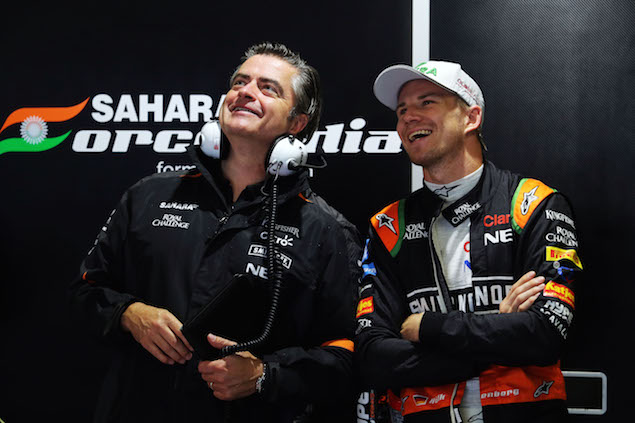 Week 3 of our Force India winter diary and the next man in the hot seat can really wear the “been there, done that, read the book, seen the film” T-shirt. Andy Stevenson is another member of the workforce who has been with this team through all its iterations, starting off as a mechanic with Jordan and, for the last four years he’s been the Sporting Director.

It’s a role that covers a multitude of sins as Stevenson explains: “The title of Sporting Director is extremely similar to team manager. I am part of the senior management group as well, so I’m involved in every decision that we make as we work on moving the team forward.”

The job is clearly nothing if not varied.

“This morning, I’m dealing with physiotherapists for the drivers and sorting out the drivers’ motorhomes,” Stevenson says. “Later on today, I’ll do a bit more concerning the team personnel fitness stuff, talking to the local gym where the guys go and train. Tomorrow it will be sporting regulations, in preparation for the meeting that we’ll have with the Sporting Regulation Group with Charlie (Whiting, F1 Race Director) in Barcelona.”

It’s the aforementioned team fitness that is taking up a chunk of Stevenson’s time right now, as getting the guys working in unison for the pit stops is a vital part of the performance factor for any team.

With the increased number of races and the particularly tough schedule we’re going to have in 2016, we’ve decided to push this a little bit more

“We’ve been actively working on the crew’s fitness since the removal of refuelling when pit-stop times became a lot more important,” he relates. “The only way you can get the consistency is through practice and the only way you can practise is if the guys are fit enough to do it. We initially found that our guys weren’t and started working on it. Year on year, we’ve been trying to improve the programme. With the increased number of races and the particularly tough schedule we’re going to have in 2016, we’ve decided to push this a little bit more, so we’re looking at ways that we can help the guys to improve their general health and wellbeing, through fitness and diet.”

Is nothing sacred? What happened to the stereotype of the beer drinking, roll-up smoking, exercise-averse F1 mechanic? A thing of the past apparently.

“We try and encourage the guys to do the right thing,” continues Stevenson. “At the circuit, we can control that a little bit because we’re the people supplying the food. When the guys are back at the factory or when they’re at home, it’s up to them. We want them to make the right choices and we give them the training so they are aware of what the right choices are. At the end of the day, they are mechanics, they’re not athletes, and we don’t want to detract from what they’re here for, which is to build race cars.

“I always say, when we look at the pit crew, we look at it like a rugby scrum. We’ve got all sorts of shapes and sizes involved, but if one of those guys doesn’t do his job correctly, you’re not going to win the scrum. So the key is to work as a team together so if someone is struggling, one of their teammates is going to help them out. We’re always punching above our weight with what we have available to us.” 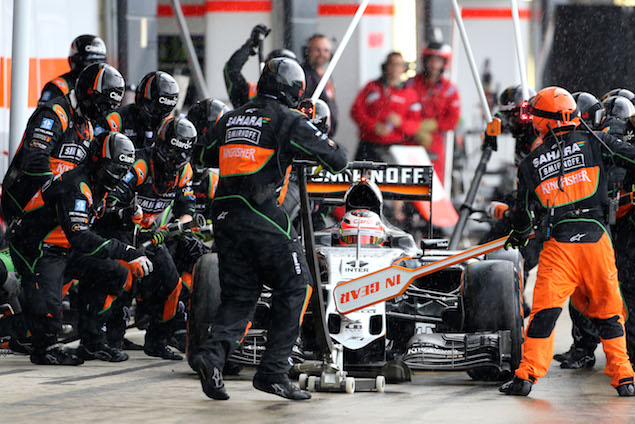 As always, budgetary considerations – that’s cold hard cash to you and me – have an impact on a private team like Force India.

“We have to focus on where we can find the most performance and at the moment, the equipment I want to buy for the pit crew is quite a long way down on that list,” admits Stevenson. “We don’t run an automated traffic light system, we don’t run automated jacks. Our pit stop is very old-school. We have lights to indicate when jobs are done but nothing’s automated. The whole thing is controlled with a lollipop man and I think we’re the only guys in the pit lane who still do that now.”

Whatever the budget, there are still 24 hours in every day, so plenty of pit stop practice is on the Force India agenda while the team waits for the 2016 car to be ready for action.

“We will do between 60 and 100 pit stops every day,” reveals Stevenson. “We’ll try and squeeze in two sessions a day.”

The well-drilled pit crew will have 21 races at which to demonstrate their skills this year, as Formula 1 embarks on its busiest season ever. It’s going to be a formidable challenge for everyone in the Circus and it’s one that Stevenson is relishing.

“I’m probably one of the few people you’ll find that is in favour of the amount of races we do growing to where we are now. I think that Formula 1 is a great product, but we have to keep building, we have to keep finding countries that want us to go and race there. It wasn’t that long ago that you couldn’t get through the door in Germany and now we’re finding it difficult to get them to host the race, so we have to keep it fresh, we have to keep moving around, we have to keep looking around for new markets. “21 races will be tough but we’re a racing team, it is what we do. It seems quite daunting but I’m not a fan of the off-season. I can’t wait to get to Melbourne even if it isn’t one of my favourite races, but it’s the event itself I can’t wait for, to get on the track and see what people have managed to do over the winter. Hopefully we will have done a bit more than the rest!”

Getting the team to each and every one of those 21 races this year is another of Stevenson’s concerns.

“Our travel every year does work well, but we have very strict budgets to stick within,” he says. “In fact, from the back end of the season up until the new year, the majority of my time is taken up with budgets, which is something I never expected to be doing when I got involved in this sport.

“It means I probably do more hours in December than any other month of the year, which always makes me laugh when you get to Abu Dhabi and everyone says, ‘Are you looking forward to a few weeks off?’ and I think, ‘I’m going in to the worst two to three weeks of my entire season’ because if there’s something I don’t enjoy, it’s the budget side of the job.

“We’re still going over the figures from last year, making sure that we didn’t spend too much. Everything looks good in that area. Again, it’s a case of how can we be smarter, how can we make more money available for performance? 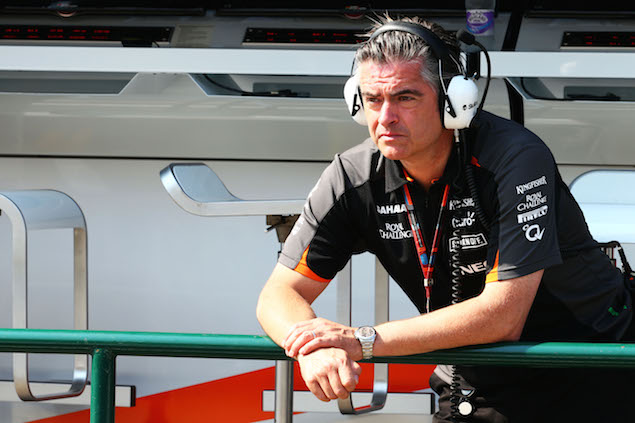 “Travelling around the world has to be convenient and comfortable, but within a budget. There’s no use us taking a team around the world and everybody being grumpy whenever we turn up, because the hotel’s not that great or they’ve had to do 14 stopovers to get there because it saved £100 a person, so we’re continually trying to assess it and work out the best way of doing it.

“Sticking to the budgets is easy. In fact, I think we’re in a very good position to do a lot with a little, because we’ve always had to. We were brought up that way,” concludes Andy with a smile, the inference being that the original incumbent of this building had an Irishman’s very “careful” approach to spending money.

If you’re a died in the wool Formula 1 fan, you might find it hard to believe that the gradual increase in the number of races per year doesn’t suit everyone who works in the sport. Each winter, there are some personnel who feel enough is enough.

“In terms of the race team, we have seen that in the past,” admits Stevenson. “But where we are at the moment, we’ve got a relatively young average age among the guys and they all seem incredibly keen. In fact, I’ve heard very little mention about the 21 races. But I probably will after the summer shutdown, because that middle part of the season does look pretty tough to me. But overall, I don’t think our staff turnover is that high.”