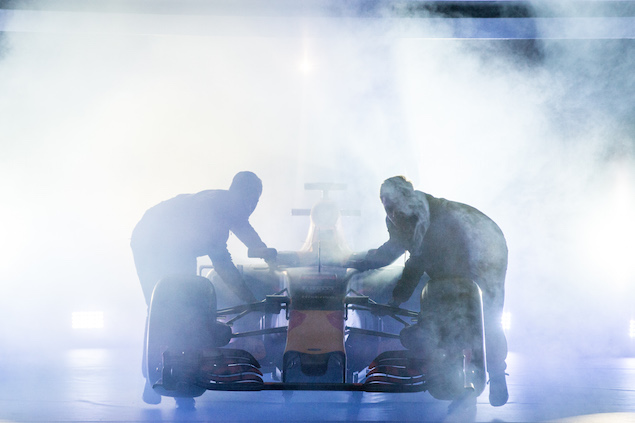 In a year when the majority of teams have announced they will be presenting their 2016 cars in the Barcelona pit lane in the same single hour stampede, prior to the first day of winter testing this coming Monday, thank you Red Bull for giving us a more relaxed presentation in London last night, even if it had a stampede as its theme.

The invitation said that the after-party would go on until “11 am” so I was a bit disappointed to discover this was a typographical error and should have read “11 pm.” In the good old days of Red Bull, it really would have gone on until the early hours of the following morning. An actual launch party is such a rare event in F1 terms these days, that there was even a good number of foreign journalists who made the trip to London, although one of them admitted to me he’d only come “to buy some cheese in Fortnum and Mason.”

The car on stage was last year’s, but we were there to see it’s new livery and more importantly, talk to team principal Christian Horner and the two drivers, Daniel Ricciardo and Daniil Kvyat. Personally, I couldn’t care less about seeing the new car or not, as there will be plenty of time for that and anyway, the days of one team coming up with something visibly revolutionary are long gone, thanks to the restrictive nature of the technical regulations. 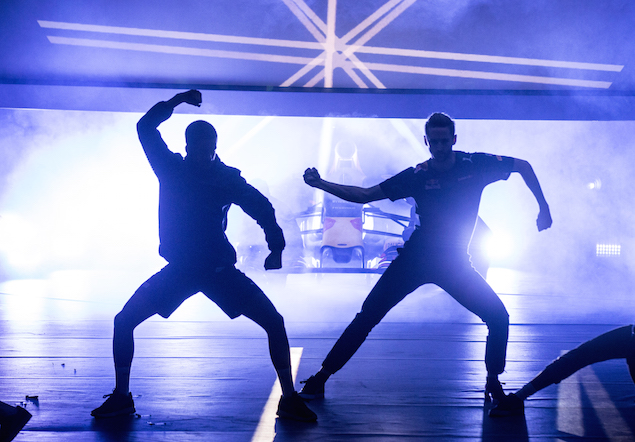 The event had been organised by one of the team’s many new sponsors, Puma, who had an army of marketing types running around, something that comes easily to them as the company is famous for its running shoes. Underneath the interesting matt finish livery, the package Red Bull Racing will run this year can trace its very short lineage back to last year, as the Tag-Heuer Power Unit comes courtesy of Renault. Will the two companies be able to bury their differences and work in harmony?

Family rows are something with which Puma is all too familiar as it was born out of an amazing fraternal feud between the Dassler brothers, Adolf and Rudi who hated one another with a passion that split the town in which they first made their “Dassler” trainers. Ironically, given they both joined the Nazi party, they managed to get 1936 Olympics star, the African-American Jesse Owens to wear their trainers on his way to four gold medals and the brand took off. Eventually, the brothers split the business into what we know today as Adidas and Puma.

History lesson over, back to the presentation on stage, run by some young lady who was a bit over eager to use the word "amazing" after every answer. Thankfully, her co-host was the ever-reliable David Coulthard. Yes, for DC, years after stepping out of the cockpit, Red Bull is the truly the “gift that keeps on giving” but not in the nasty genital herpes way.

The venue for the launch was the Truman Brewery in uber-trendy Brick Lane, whose F1 links can be traced back to former FIA president Max Mosley’s father Sir Oswald, who gave one of his most famous pro-fascism speeches just round the corner. These days, the only people wearing black shirts round here are the hipsters, neatly referenced by Horner who said, “it’s my first time to East London, I should have turned up with a bigger beard and riding a bicycle.”

The car was revealed to an interesting backdrop of a video of stampeding bulls, real and animated. I couldn’t help thinking that whoever was tasked with doing the graphics had never actually left Hoxton or seen a bull in a field, because the stampede, which you can watch towards the end of this clip, looked more like a panicked colony of rabbits.

On to more serious matters as we got a chance to quiz Horner and his drivers about the coming season. Quite rightly, the team boss is playing down their chances of doing anything spectacular on track, at least for the first half of the season, until the Renault revival is due to get underway. He pointed out that sister team Toro Rosso have bought themselves an instant 8 tenths of a second per lap compared to last year, by the simple expedient of bolting a Ferrari engine into the back of their chassis. If you ask me, the Faenza squad could spring the biggest surprise of the early part of the year, with that well proven 2015 engine bolted into the back of what was already a hot chassis last year. If I were a betting man I’d risk a few quid on seeing Verstappen or Sainz on the podium before we get back to Europe. However, we can expect Red Bull to come on song later in the year, although realistically they’ll be hoping to luck-in to a win or two rather than beating Mercedes and Ferrari on outright merit. 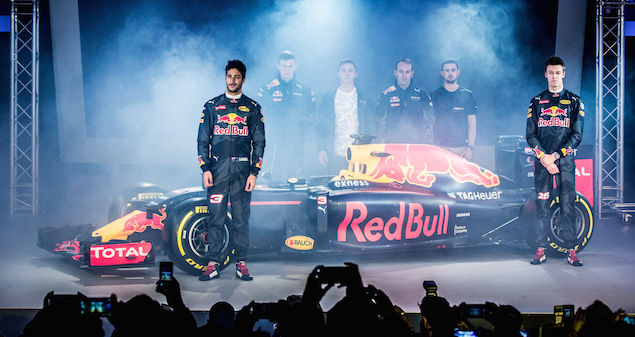 As for the drivers, you can’t expect them to have much to say before they’ve even driven the car, having spent the winter “doing bugger all” according to Horner. However, Ricciardo was clearly very excited about his new singing career. Last week he was up on stage at a London gig joining Aussie band, “Parkway Drive” for one number: “Definitely the best thing I’ve done all pre-season, probably the best thing I’ve done since my Canada win (his maiden F1 victory in 2014) actually,” he reckoned. “It was very hardcore. Going on stage, in front of all those people was a bonus, but the coolest part was performing with a band that you love. It was pretty awesome. I’d emailed them that week saying I was in London and would love to come to the show and they replied saying, ‘how’s your musical timing? Do you want to come and sing a few lines from Deliver Me with us?’ I was giggling like a kid. I knew that by saying ‘yes’ I’d spend the whole week thinking about it and shitting myself. I’ve had an alcohol-free 2016, but I may have had a little shot of whiskey to calm the nerves that night.”

But does racing still give Daniel that same buzz? “Yes it does,” he replied. “It’s easy to lose it and, at the beginning of last year, after the first few races I noticed I wasn’t enjoying it as much as I should have, so I made a conscious effort to change that. Then, you get to places like Monaco and, yeah, that’s the feeling you live for. Sometimes the race can be the aftermath of all the excitement. But the build up, the pre-race, the grid, all that, it’s worth getting excited for and in a way, it’s the best part of the weekend.”

“Parkway Drive” do a number called Karma: after the troubles of 2015, Ricciardo and the whole Red Bull team will no doubt be hoping for some of that to work in their favour this season. 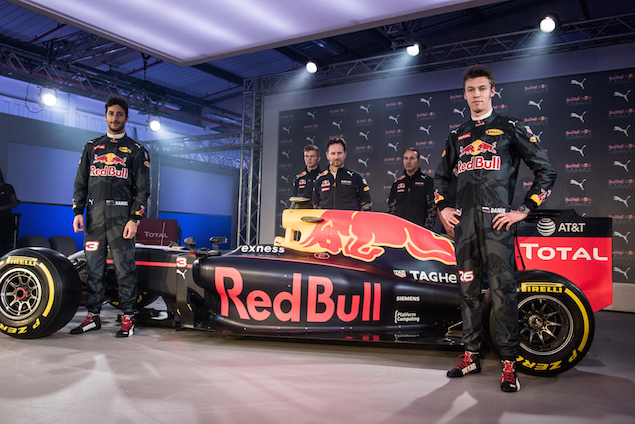