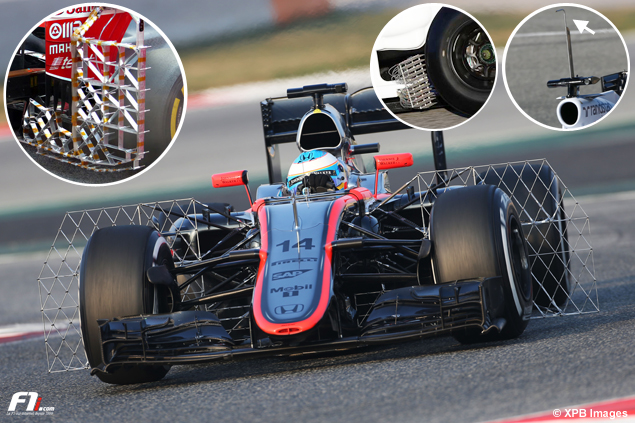 After detailing with former F1 engineer and Audi Sport Abt technical director (DTM and Formula E) Jacky Eeckelaert how F1 teams manage the power unit validation process during pre-season testing, he takes us through the various chassis procedures.

Phase 2 begins with teams making sure that the actual on-track downforce levels match the results collected inside the windtunnel. These are calculated via specific sensors placed on the suspension rods while the car is carrying out constant speed runs. In order to achieve this, teams use the speed limiter – which is usually only activated in the pit lane – and calibrates the system to a constant speed of 150, 180, or 250km/h.

Teams thus pick up many more measurement points than if they tried to evaluate downforce with the car running at its normal speed, since this includes several acceleration phases. If a driver stays at 180km/h for five seconds, and the measurement is made at a 50 Hz rate (i.e. 50 times per second), engineers have 250 references to estimate downforce. Calculating an average of the data then enables teams to obtain more detailed figures.

However, downforce levels do not solely depend on the car’s speed and the angle of incidence of its wings; these also vary with front and rear ground clearance, the latter being measured thanks to lasers. Based on these different factors, test teams can get a pretty accurate assessment of their car’s downforce. They can then compare it to the theoretical results that have been collected on their scale model inside the windtunnel. 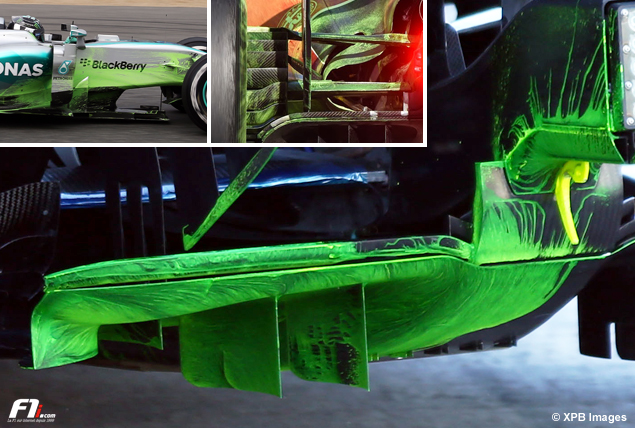 Aerodynamicists are well aware that windtunnel and CFD (computational fluid dynamics) data are only pinpoint accurate in the virtual world! Indeed, nothing can replace on-track validation. This is why engineers will study how the air flows around the chassis and bodywork thanks to a fluorescent paint, called “flow viz paint” (for visualisation).

In practice, a paraffin-based light coat of paint is applied on selected parts of the bodywork engineers wish to investigate. When the car is running on track, the wind dries the paint and reveals how the fluorescent particles have been moved around the specific areas. Back in the closed garage, the team then uses an ultra-violet light to study detailed air flow patterns across the car, their intensity, direction, areas where the flow may have ruptured, etc...

Once again, you compare the observations with the data you’ve gathered inside the windtunnel and via CFD. As you can imagine, this is tedious, repetitive, and not really exhilarating work, but it remains vital if you want to lay solid foundations for the season ahead. 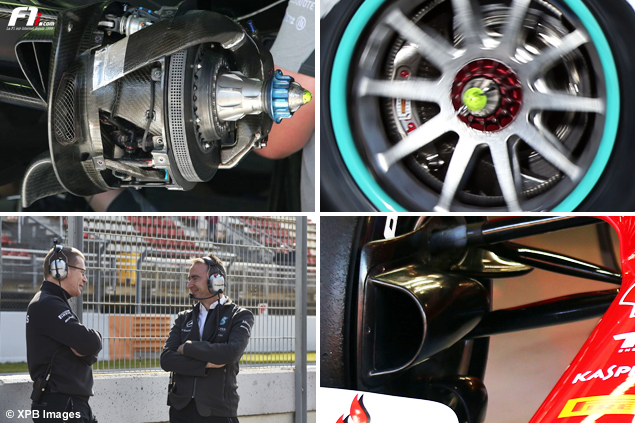 STEADY ON THE BRAKES…

If everything functions properly, engineers can then move on to tackle more ‘classic’ items in their programmes, like working on kinematics, trialling several camber settings, or sampling various aero specifications (low downforce, heavy aerodynamic load) etc.

Another important area to check is the brakes. Since carbon disks operate within a specific temperature window, cooling must match these requirements. If the disks are too cold, braking is not optimal when the driver starts to hit the pedal. However, if they’re not cool enough, the heat can cause permanent carbon oxidation, which in turn leads to premature brake wear.

Unlike Jerez, where maximum cooling is required and oversized brake ducts are therefore de rigueur, Circuit de Catalunya is not very demanding in that area according to the chart that ranked F1 tracks depending on braking intensity. Using simulation tools, engineers calculate how much energy is released through the brake ducts as well as what the cooling potential is like over a lap. The internal flow travelling inside the ducts, through the disks and around the calipers is studied in CFD. Data correlation usually proves pretty accurate although blown front wheel hubs remain pretty tricky to fine-tune. It is worth noting that ambient air temperature does not really factor in carbon discs cooling. When these reach 1000°C under braking, it matters little whether it is 15 or 30°C on track. What’s more, infrared cameras are often installed on the car’s rear-view mirrors (see below) in order to monitor how tyres warm up.

F1 engineers also keep a close watch on how much heat is released around the engine cover. Indeed, the latter wraps up as tightly as possible for aerodynamic purposes so the car’s “carbon skin” ends up being very close to both the exhaust and engine. Technicians also need to control the maximum temperature around the rear wing support pylon, making sure it does not exceed 160°C. This would indeed weaken the whole structure, a crucial assembly that bears the entire rear aerodynamic load. Now that there’s only a single exhaust exit on the car (instead of two during the previous normally-aspirated V8 era), this parameter has become easier to monitor. 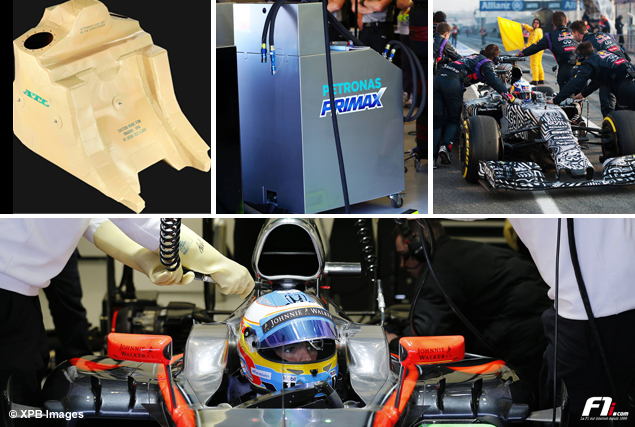 On dry runs, F1 teams also drain the tank to make sure everything is fine in that area as well. It's done in the following way: a driver goes for a run on old tyres – at any rate, this is what serious teams do! – while carrying low fuel and stays out until the car stops on track. Since this will certainly bring out a red flag, they usually do it at the end of the morning or afternoon session in order not to disrupt the others’ running too much.

Once the car is back in the pits, the mechanics empty its tank and let the engineers evaluate what’s left inside. At that moment, a well-designed tank should carry half a kilo of fuel at most. Let’s imagine the engine starts hitting trouble with four of five kg left in the tank. This would mean you’re always running with an extra fuel load, which amounts to around a couple of tenths per lap. Over a race distance (60 laps or so), you’ll end up losing a dozen seconds… It’s essential that the car does not have any issues when running on low fuel, even more so in qualifying trim.

TESTING THE TYRES, ANALYSING THE DATA

While performance assessment is a key item on the teams’ to-do lists, they’re simultaneously monitoring reliability. The teams that feel the most confident about their competitiveness usually go for long runs in order to explore their car’s limits as well as to gauge tyre wear during race simulations. Basically, teams send their driver for three 20-lap runs so that they can find the best set-ups. Of course, F1 engineers remain careful not to read too much into pre-season testing performances as these are usually produced in conditions that are never 100% representative. However, the collected data will still prove very useful to prepare for the upcoming season.

One thing that often goes unnoticed is the fact that there’s actually a lot going on back at the teams’ factories in pre-season testing, with a lot of staff mobilised during the sessions and telemetry results being shared almost in real time. Back home, data analysts are poring over the information all day long before sending a detailed report late at night. This will help the team redefine their programme for the following day, while also giving them the opportunity to better exploit the session’s remaining time. Any engineer will tell you that you’ve never got enough time to complete what you've set to achieve! If a major problem pops up at that stage (in terms of cooling for instance), then it goes straight to the design office, where technicians will start to work on finding a solution right away. 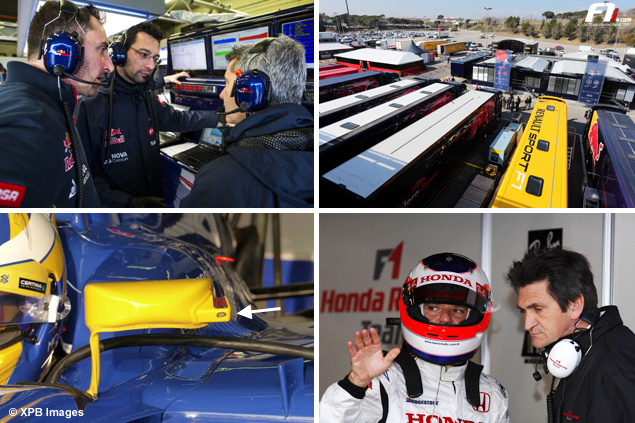 The second test in numbers