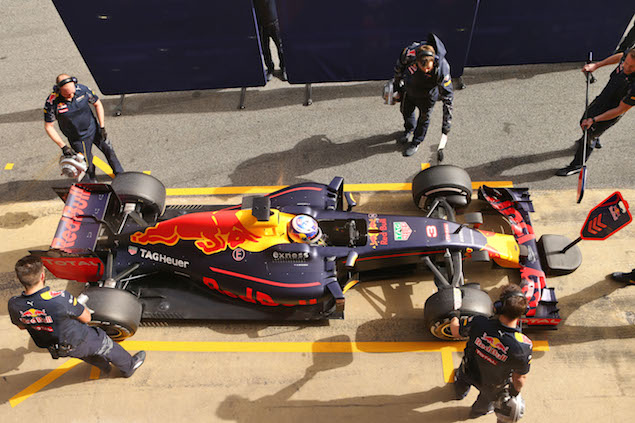 Daniel Ricciardo (3rd, 1:26.044, 87 laps)
“That was pretty good. I think we had a few niggles but we still managed almost 90 laps. It was a day for testing reliability: for me, seeing how fit I am after a long off-season, and for the team seeing how the car is – where it’s reliable and where not. It was important to get in some good 15-lap runs to make sure the car is not doing anything silly and we did that. Once we have that then we can find the pace, but reliability is the first thing you want. The car feels familiar, it doesn’t feel strange and that’s positive. I think last year we ended the season quite well, the car was good, and this feels similar. First impressions are positive but it’s still too early to say much more. We had a good day and I’m ready for more.”

Guillaume Rocquelin, head of race engineering
“It was a very good first day at the office for us. The car build went according to plan, we had no major issues there and we made it out on track on time. We had a small issue in the morning but it was nothing serious, just something that had worked loose and which took a while to get to. But once we were up and running again, we managed to run very consistently, which is really all that you are looking for on the first day. If you get that then you can start working through the checklist of items you have to get ready for the start of the season. With just eight days of testing that’s what this week and next will be all about – getting as prepared as possible for what will come. For Daniel, I think he was satisfied with how things went. There’s obviously not much he can get from the car in terms of how it ultimately feels, so for him it’s more about blowing off the dust and getting back into it and I think he enjoyed that. Today we chomped a good bit out of the workload and we’ll hope for more of the same tomorrow.”