With Force India coming off its best season to date, F1i technical expert Nicolas Carpentiers is not surprised to notice that the VJM09 shares many similarities with its late 2015-spec predecessor. 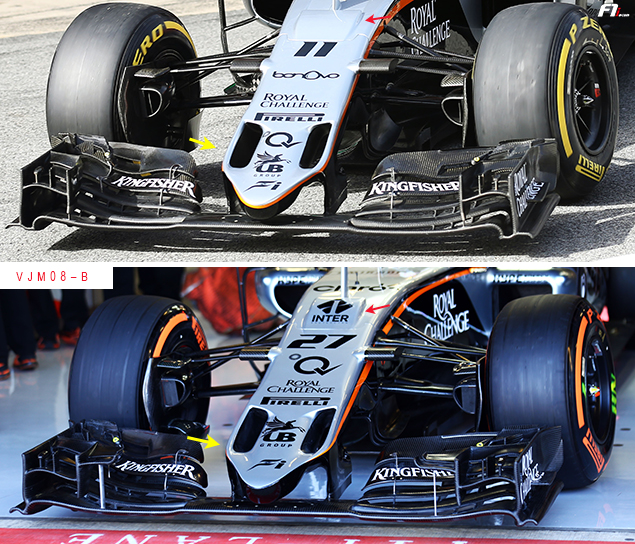 Despite its delayed introduction, last year’s VJM08-B quickly proved to be a competitive machine and helped propel Force India to an unprecedented fifth in the Constructors’ championship, nothing short of a miracle given the team’s limited financial resources.

It was then only logical for Force India’s 2016 challenger to be an evolution of the concept, even more so when there is a costly technical revolution looming ahead. Like its predecessor, the VJM09 was designed inside Toyota’s windtunnel in Cologne, while the computational fluid dynamics (CFD) department also received a boost in resources.

“You can say the B-spec car from last year formed a basis on which to build our 2016 one,” said Force India technical director Andrew Green. “We were in a situation in which the performance on track was very good, and in which the data we were getting correlated well to what we were expecting, so we knew we could continue to develop on a solid platform.

“With the regulations likely to change for 2017, it didn’t really seem like an efficient use of our resources to start from scratch on a project that would have such a limited lifetime.”

The VJM09’s long nosecone still sports its trademark nostrils, which help maximise the airflow under nose. No other team in the paddock has gone for a similar solution, which is perhaps a bit surprising considering the design offers a good compromise. Indeed, the nostrils help generate the same effects as a short nosecone while its longer structure makes it easier to build ahead of the mandatory FIA crash tests.

Force India’s ‘S’-duct keeps its curved outlet pipe sitting astride the nose when Mercedes and McLaren-Honda’s versions feature a hole that has been hollowed out within the chassis itself. The idea is to prevent as much as possible airflow disruption over and under the nose. Aerodynamicists refer to this slow air as the ‘boundary layer’. The ‘S’-duct swallows the air under the nose before spitting it out through the top.