It seems Eric Silbermann is angling for a job writing Lonely Planet travel guides, as there is virtually no mention of Formula 1 in today’s offering: it’s all smog, scooters and subways. 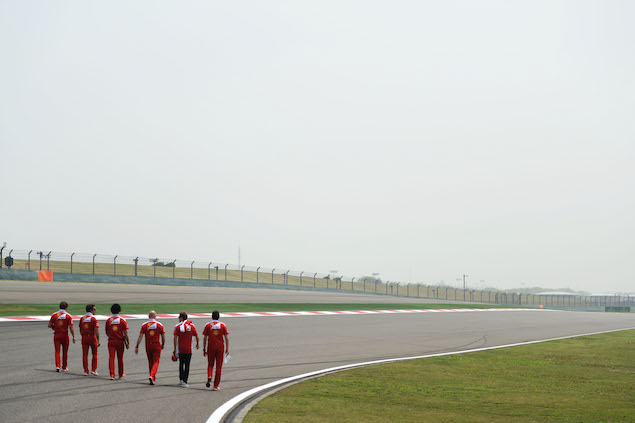 I must admit that when my attempts at getting a Chinese visa while in Melbourne started to go pear-shaped, I was secretly wondering how much of my air ticket money I would be able to recoup if I sadly had to cancel my trip to Shanghai. By “sadly,” I mean with a huge grin on my face at the prospect of a quick Saturday trip to the WEC event at Silverstone and a Sunday spent road-testing Ducatis at my local dealer’s open day.

The rules of engagement for the Chinese visa had changed this year and I didn’t have proof of how I’d got into Australia. Clearly fearing I’d come in on a convict ship, the Chinese consul staff sent me off to get proof of my legal status and when I returned triumphant, I was then told I was applying too early. I pointed out that this wasn’t how it had worked the previous year only to be told, “The protocol for entering the People’s Republic of China changes often.” Welcome to life in an authoritarian one-party state.

Much of the current griping in Formula 1 could be summed up as the people who run the sport not being in touch with the needs of the competitors and we are not unique as a business in this respect. It became plain to me that the part of an airline that sells tickets has not the slightest idea what life is like for a passenger trying to get through an airport. I only looked at my Shanghai ticket a day before departure and it involved taking off from Frankfurt an hour and ten minutes after landing there. So, a technical delay at Heathrow and the need to get from one terminal to another in Frankfurt, meant a mad dash dragging my suitcase, as I at least had the foresight to go hand-luggage only. 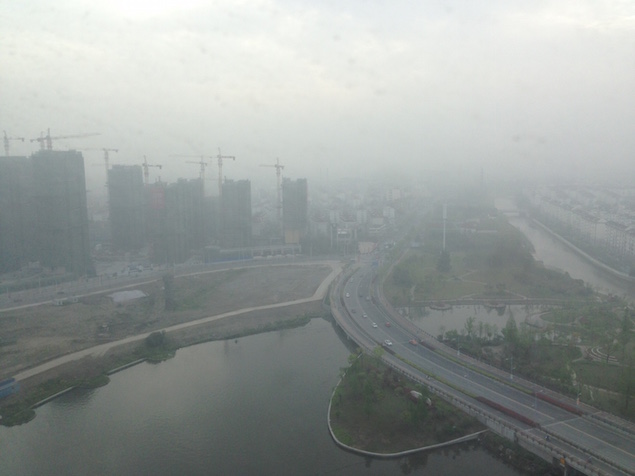 Once again, I was beginning to think of making excuses for my absence from the Pearl of the Orient as Shanghai is known. However, hot, sweaty, possibly smelly and out of breath, I made it by the skin of my teeth. Back to that Pearl of the Orient moniker, you can get black pearls and I assume this is what whoever gave the Chinese city that soubriquet was thinking of, because despite the downturn in the economy here, production of smog and black filth is still going great guns. So great in fact that our plane had to divert for a short stop in Beijing, because Shanghai’s Pudong airport was smog/fogbound first thing on Wednesday morning.

While this city appears to be hell bent on destroying the planet, they deserve some praise for their scooters, which are all electric: good for the environment, but not so good for my own safety when walking to the Metro. The scooterists, complete with this year’s must have accessory, a sort of duvet with arm holes slung over the handlebars, are just as likely to be riding on the pavement. You can’t really blame them, as during the Thursday night rush hour I witnessed streams of cars bouncing over the pavement to drive on the cycle-scooter paths at speed well over 30 mph. 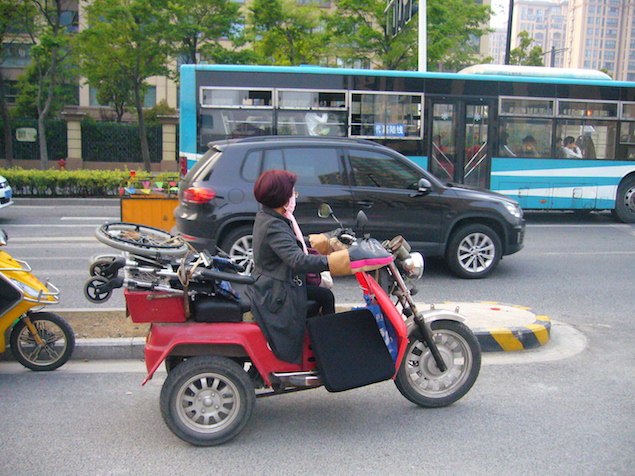 I’m not a big fan of flying, but any sense of relief at being back on terra firma tends to evaporate at Pudong once you join the taxi queue. In recent years, driving standards and the quality of the taxis themselves have improved, but there’s still the odd rogue VW Santana, apparently manufactured in the year the eponymous Carlos played that great set at the Woodstock festival of music, peace, love and narcotics. So you wait and watch until the Taxi controller points her fickle finger of fate at… oh no, it is not my lucky day! If Clint Eastwood was next in the queue he’d be pointing Dirty Harry’s huge Magnum (not an ice cream) at me. The journey begins and within the first few hundred yards our driver has ensured we sample all available lanes on the motorway, proved the horn works, demonstrated his prowess at making an emergency stop and the ability to spit out the window while talking on two phones simultaneously. His name is written in the local script under a photo taken about 40 years ago and I assume it translates into English as Dick Turpin, given the price he demands for driving us round the houses. Given we’re in China, I guess it’s a case of Ai Wei Wei Robbery. (You cannot imagine how long Silbermann has been waiting to unload that joke on you all. Ed.)

It dawned on me that the safest way to travel with the cleanest air was the Metro system, which delivers me from my hotel in downtown Jiading to the track itself in just 45 minutes, for the princely sum of 40p per trip. It’s a bit like using the trains in Japan about 30 years ago, when hardly any of the signs were written in English and you couldn’t have attracted more stares from the locals if you’d been travelling stark naked, apart from your Media Pass of course. 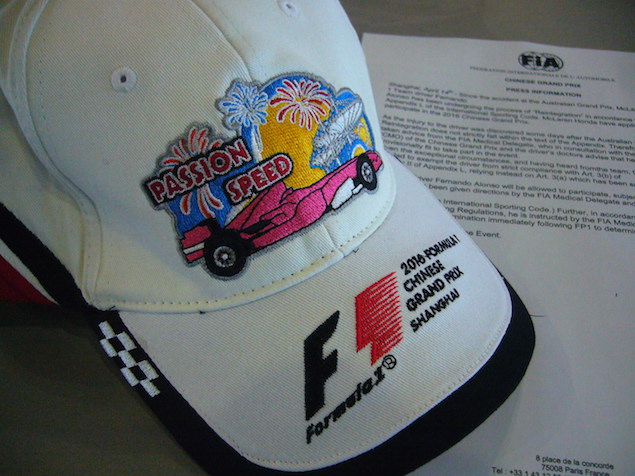 Once at the track, it’s the story you’re familiar with by now, in that walking from the Media Centre - in the giant zeppelin on the 9th floor of the building that links paddock to grandstand - to the Haas garage at the far end of pit lane, takes a good 20 minutes. It all fits the Communist ethos of “make it grand, grey and granite” but is not conducive to creating any atmosphere or sense of excitement. Thank goodness, the track itself is one of Hermann Tilke’s better creations.

Thankfully, there is a lift and evidently the Chinese think we Westerners are nothing but a bunch of thrill seeking Krazy Kats, hence the sign warning us not to mess around in the elevators. There are other signs telling us not to lean against the door – probably sensible – but more obscure is the exhortation not to press the floor buttons with the tip of one’s umbrella. 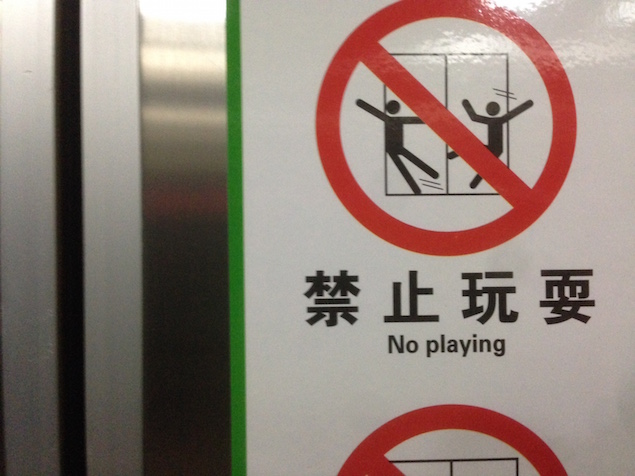 Once you make it to the 9th floor and sign on in the Media Centre, our hosts always provide us with gifts, presumably paid for by ripping us off to the tune of £120 to use the internet, the highest charge of the whole season. (Public Service Announcement: fellow media, next year buy a local Sim Card at the airport loaded with 6GB of Data useage and pay just £38, then split it with one or two colleagues.)

You could accept it if it worked, but a combination of the Great FireWall of China and it’s snail-like speed and a total block on Gmail and Google, make for a difficult weekend. On the plus side, there is far less rubbish coming through on Twitter from the F1 folk who believe that tweeting, “Hi from Shanghai” or a random photo of a corner of the track with the caption “My office for the day” is interesting or humorous. Oh yes, back to the gifts: this year we got a little bag with a strange pouch that I felt compelled to turn into a glove puppet and a hat that would be more appropriate for a Hawaiian GP. Still, it’ll all fetch a good price on eBay. 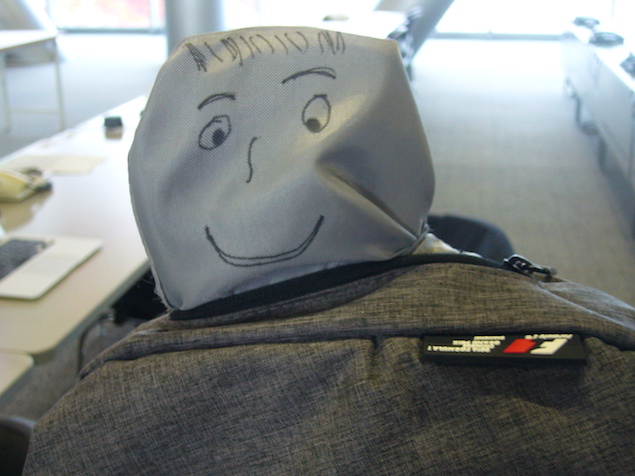