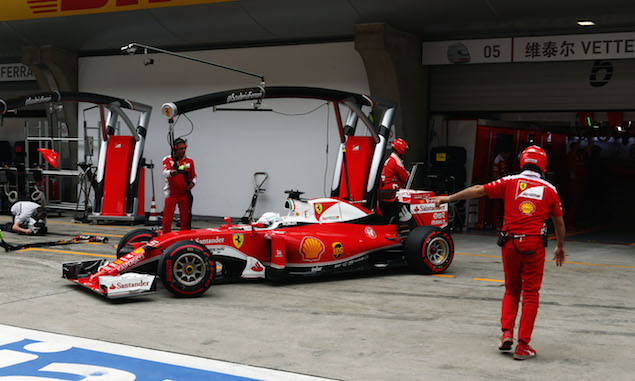 Sebastian Vettel - 4th place
“I don’t think I deserved to be in the top three today. We saved tyres, so we start tomorrow on Supersofts. I thought I could make it in the last lap, but my only run wasn’t special overall. I asked too much from my tyres already at the beginning and then I did a couple of small mistakes here and there, which cost me a lot of lap time. So in the end my run was not so good, but this is how it is and we can’t change it now. All in all, I think it has been a good weekend for us so far, and I think tomorrow it can be even better. Race strategies are different from one team to another, which is interesting. Maybe we can have already a shoot at the start, the one we had in Australia was very good so perhaps we can repeat it. Our target is to go forward from where we are…”

Kimi Raikkonen - 3rd place
“It’s more of a disappointment than anything else: today we had the chance of getting a better result. I don’t know if pole position could have been possible, but for sure we could have easily been second fastest. In the second last corner I ran wide and lost a lot of time. The position could have been much worse after that mistake, but we still have third place, which is not such a bad starting point for the race. It’s hard to predict what will happen tomorrow, it will depend on so many factors, the weather and the different tactics from the teams. In the race things are different: we’ll try to do our maximum, be the fastest and see where it brings.”