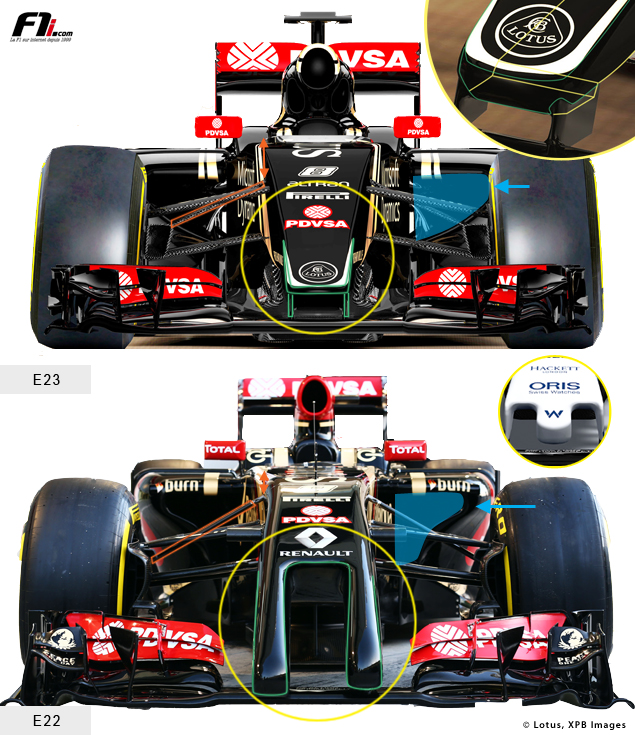 A first look at Lotus' charger underlines the car's more conventional nose which replaces the audacious twin-tusk assembly sported by last year's E22. In compliance with the new 2015 technical regulations, the car's tip appears relatively short, and probably very close to the 85 cm limit which extends from the front axle. Slightly narrow and tapered, the E23's nose design appears well balanced however and very different from the prototype front which was tested during practice at last year's USA Grand Prix.

It also obviously deviates radically from the Williams FW37's narrowing and curved anterior, designed to obstruct the air flow as little as possible. Lotus' aerodynamic engineers also evidently worked to optimise air flow but did so by shaping a 'step' under the nose which also helps the section comply with the mandatory 200 cm2 cross section (see the yellow outline in the above insert).

The top section around the front end presents a sloping and relatively high flat surface, with a low-mounted front suspension perhaps conceived with the purpose to enhance mechanical grip or aerodynamic flow. After last year's original FRIC design was banned mi-season, Enstone engineers were forced to design a completely new suspension for this years' E23. 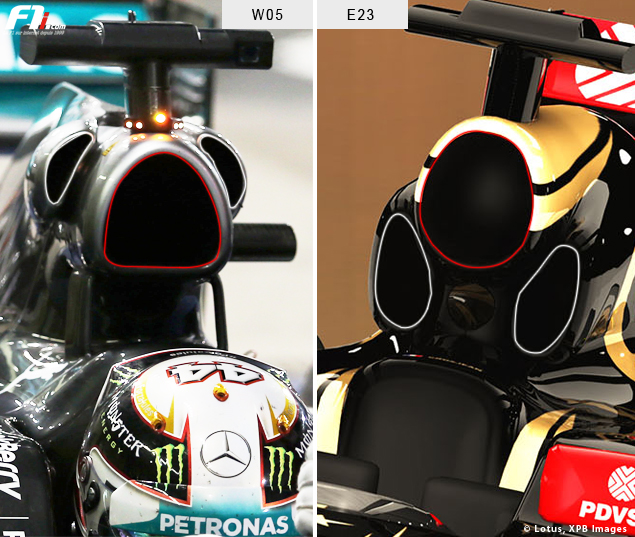 Lotus' roll-hoop inlets form a trio with the central inlet bordered on each side by two additional ducts. The latter may direct air to an oil cooler mounted beside the engine if the car's bellied engine cover (right under the Genii logo) is any indication. A solution adopted last year by Toro Rosso.

This structure also resembles the airbox used on the Mercedes cars in 2014 which was also divided into three intakes (as seen on the images above). On the W05 championship winning machine, the main inlet fed fresh air to the engine and intercooler while the lateral inlets directed a draft to two oil radiators located on the transmission (one destined for direct cooling while the other handled temperature reduction of other elements like ERS, battery, engine oil, etc...). The new E23, powered for the first time by a Mercedes engine, may follow a similar layout and function.

Sidepods are definitely narrower than on last year's car as the Mercedes plant's cooling requirements may be lesser than those of the Renault. It's also said that the German manufacturer's 2015 specification will enjoy an even more robust output. "From the data we have it's definitely got better from last year," said Force India Technical Director Andy Green. "And I'm expecting another step in the middle of the season too. We're excited about that." 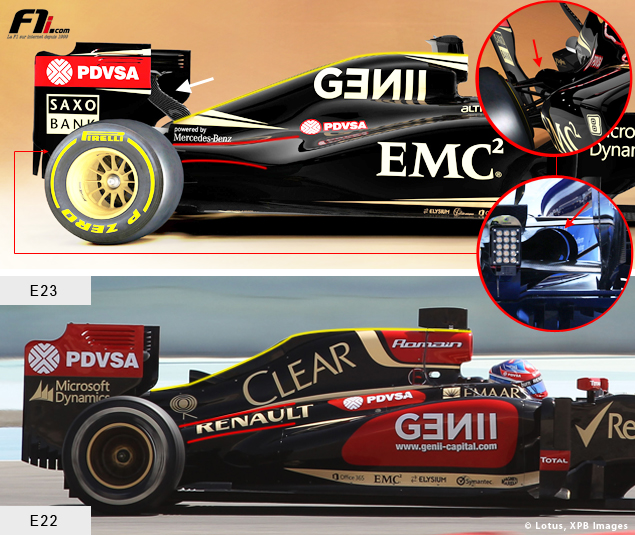 A profile view clearly distinguishes the E23 from its predecessor, with a more progressive body decline after the airbox and two extractor canons located in the rearmost section which extend through the suspension elements, a configuration similar to the one used on the McLaren MP4-29 or the Red Bull RB10. The new Lotus' rear wing central pillar is completely different from the asymmetric shape used on the E22, and relies most probably on an inverse 'Y' structure.

The integration of the Mercedes engine obviously required massive changes, but it is all for the better as explains Lotus F1 Technical Director, Nick Chester: "We made this change as it looked and looks to be the one area of the car which could bring us the greatest performance gain. It’s not just performance, but reliability and drivability as well as packaging and cooling too."

It remains to be seen however if Lotus manages to exploit its new German horse power as successfully as Williams did last year when it changed power units. The Grove team had indeed produced a very competitive chassis while Enstone's own engineering and design department was recently slimmed down following some financial constraints. Regardless of its  level of efficiency and speed out of the box, few doubt that Lotus' E23 Hybrid represents a big step forward from last year's disastrous E22. 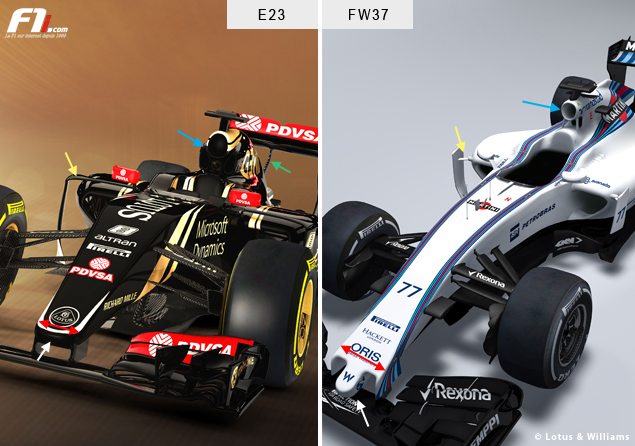 Call that a launch?